After a disappointing third-place finish at the World Championships marred Mathieu van der Poel’s otherwise magical 2017/18 campaign, the Dutch phenom still had consolation prizes in the DVV Trofee and Telenet Superprestige overall series to lock down after Worlds. Although, if you asked Van der Poel, he would certainly rather have the rainbow stripes than the nice paydays that accompany the season-long series success.

Van der Poel had the DVV Trofee locked up ahead of last weekend’s Krawatencross, so his win there served as a bittersweet victory lap. Van der Poel entered Saturday’s Superprestige Middelkerke with a four-point lead on Wout van Aert. However, the three-time defending champion hung up his Felt FRDx for the season after last weekend and began training for next weekend’s Omloop Het Nieuwsblad road race, so Saturday’s race served as another victory lap for Van der Poel.

All season long, the only rider who has been able to come close to matching Van der Poel’s blistering attacks is Van Aert. Not surprisingly, Van der Poel hit the line at Middelkerke as the odds-on favorite. Although, he was the heavy favorite at the World Championships as well, so that’s why they race the races, as they say. 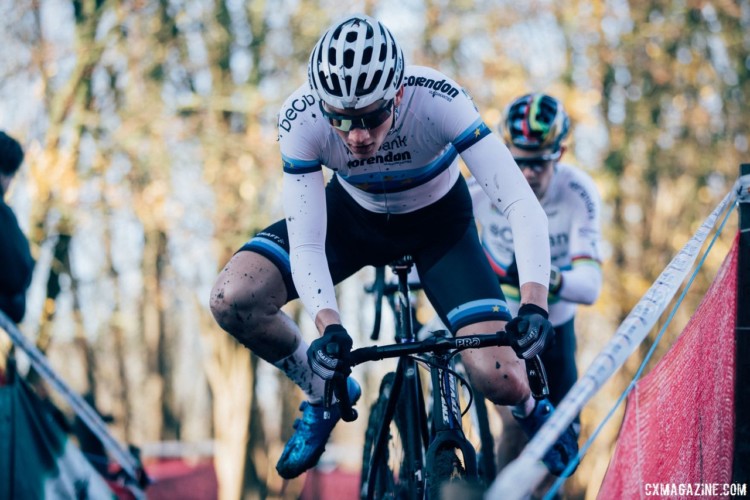 Early on, Worlds second-place finisher Michael Vanthourenhout (Marlux-Bingoal) drove the pace while Van der Poel got caught up in traffic after a slow start. The field formed a large mass near the front, and after one lap, there was a string of almost 15 riders behind Vanthourenhout.

As the second lap progressed, Van der Poel slowly but surely made his way toward the head of the large lead group. One-by-one, he picked off riders and asserted himself. With two laps in the books, it was him, David van der Poel (Corendon-Circus), Vanthourenhout and Tim Merlier (Crelan-Charles) at the front.

Given Van der Poel’s favorite status, the question of the race was perhaps, during which lap is Van der Poel going to attack and then ride solo? On Saturday, the answer was the third.

Merlier led into the long sand pit, but had to awkwardly dismount in the deep pit. Van der Poel, who is known for having fun in the sand, stayed on his bike and plowed ahead of the dismounted Merlier and Vanthourenhout. He had a gap, he turned on his five-minute power, and he opened up a ten-second lead. Merlier and Vanthourenhout kept it at about ten seconds for maybe a lap, but then Van der Poel started to extend his lead and show there would be no topping him on the afternoon.

Not even a slip on a slick corner could derail his dominance.

The win was Van der Poel’s 29th of the 2017/18 season. With it comes a nice Superprestige overall series payday. Van Aert held onto second and Laurens Sweeck (ERA-Circus) wrapped up an overall third.

Full results and top ten for the overall series are below.