Yesterday, Mathieu van der Poel’s Beobank-Corendon team announced it re-signed the Dutch wunderkind through 2020. Van der Poel’s new contract is reportedly worth €1 million, so there was no better time than Thursday’s DVV Verzekeringen Azencross in Loenhout to prove the investment is a wise one.

Early on, it looked like Van der Poel might be in for a tough fight after Wout van Aert (Crelan-Charles) got out to a fast start and Van der Poel got stuck a few wheels back.

Van der Poel eventually got to the front and just as it was on Tuesday at Zolder, the fourth lap was go time. In a matter of seconds, Van der Poel opened up a massive gap on Michael Vanthourenhout (Marlux – Napoleon Games). Van Aert tried to lead the chase back, but it was to no avail. Van der Poel was gone for a solo win yet again. It was his 20th of the season.

After struggling for much of the season, Laurens Sweeck (ERA-Circus) had a big race at Zolder, finishing on the podium in second. On Thursday, he looked to carry some momentum from the performance into the race in Loenhout. After Van Aert got off to a fast start, and Van der Poel got stuck around tenth wheel, Sweeck pulled to the front and led the charge with Van Aert. The two had an early gap after the first lap.

Their lead did not last long. Early in the second lap, Van der Poel bridged to the front and dragged a large gaggle of riders with him. With two laps in the books, the lead group was nine riders. The field had kept Van der Poel at bay for 15 minutes. During the third of eight laps, Van der Poel got to the front and pushed the pace along with Van Aert. The two were unable to break free, but the group started to splinter. The duo was joined by Toon Aerts (Telenet Fidea Lions), Corne van Kessel (Telenet Fidea Lions), Tim Merlier (Crelan-Charles) and Vanthourenhout. As it turns out, Van Aert probably wishes he could have broken the group up more. While Van der Poel continued to drive the pace into the mud pit, Van Aert faded back to the fifth spot in the six-rider train. Not exactly the place to be if Van der Poel unleashed his customary attack.

With Vanthourenhout sitting on his wheel, Van der Poel upped the wattage. Within a few hundred meters he had a five-second gap on the other riders. It happened that fast yet again. These race reports do not overuse the word “wunderkind” for a reason.

Van Aert tried to lead the chase, but it was to no avail. Van der Poel had a 13-second gap. Van der Poel’s lead continued to grow each of the next three laps. He even had time to throw in a tail whip off one of the berms where he crashed hard in 2016. The Million Euro Man defeated his Azencross demon and earned his keep. The win was his 20th of the season. 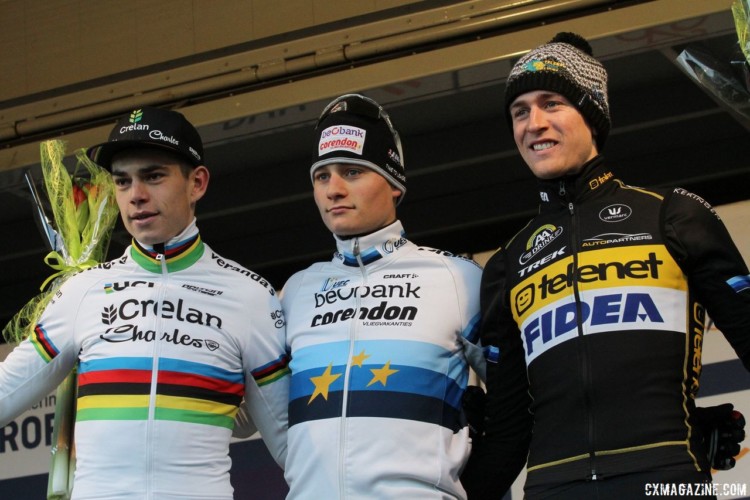 Kerstperiode racing continues on Saturday with the Superprestige Diegem. The race takes place at night, so the viewing will be more accessible for U.S. cyclocross fans who are not early risers. The Women’s race starts at 12:10 p.m. EST and the Men’s race at 2:00 p.m. EST.

Next post 2017 Year in Review: Jonathan Page and Todd Wells Ride Off Into the Cyclocross Sunset