Back From Illness, Van der Poel Revs It Up at 2017 World Cup Zolder – Report, Results

The last week has been a tough one for Mathieu van der Poel (Beobank-Corendon). The young star got ill before last weekend’s racing and spent the week trying to recover and get back to full strength. The illness was so bad, he had to take a DNS at Saturday’s Waaslandcross in Sint-Niklaas.

While Van der Poel struggled due to illness at last week’s World Cup Namur, Wout van Aert (Crelan-Charles) turned in a dominant performance. With Van Aert seemingly back on form after his mid-season break, Tuesday’s World Cup in Zolder had some added intrigue for fans looking to see how the two riders matched up now that Van der Poel is on the mend.

Van der Poel took care of any intrigue early in Tuesday’s race. After Van Aert held his wheel during one of his customary blistering starts, Van der Poel dispatched his rival in the fourth lap with a lap-long attack. One lap, 14 seconds.

Van der Poel’s advantage continued to grow as Van Aert faded after the fast start. Van der Poel zoomed to his 19th win of the season while Van Aert faded and eventually finished third behind the hard-charging Laurens Sweeck (ERA-Circus).

The win was Van der Poel’s fifth World Cup victory in seven tries this season. Is he healthy again? Sure looked like it. After grabbing the lead, Mathieu van der Poel was in control on Tuesday. 2017 World Cup Zolder. © B. Hazen / Cyclocross Magazine

Fast Start for Some Familiar Faces

If fans were looking for a sign that Mathieu van der Poel was feeling good, they needed to look no further than his blistering start at the holeshot. He raced to the first position while Van Aert settled into second wheel. Perhaps inspired by the Circuit Zolder setting, Van der Poel and Van Aert kept the pedal to the metal and forced the others to chase. Only Telenet Fidea teammates Daan Soete and Lars van der Haar were able to answer the challenge. At pit two, the lead four had a massive lead on the rest of the field.

The lead group of four did not last long. Soete had to put a foot down on one of the steep inclines at the end of the lap, and the hesitation gave Van der Poel and Van Aert a small gap they extended early in lap two. 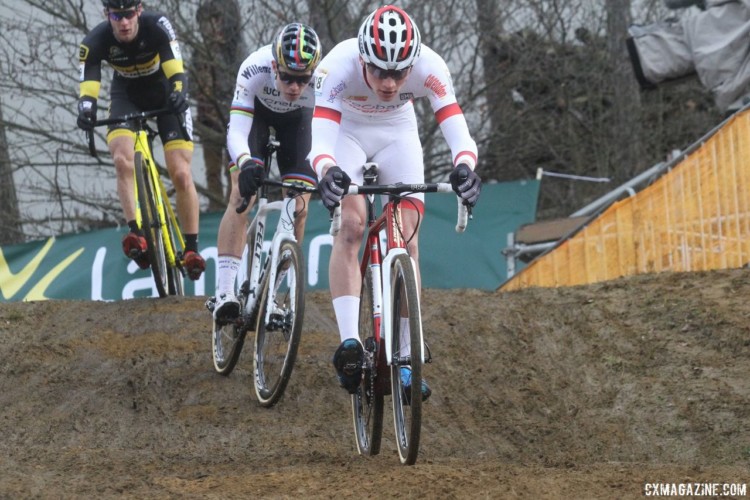 The aggressor of the lead duo early on was Van Aert. The defending World Champion took the lead spot and then attacked in the technical section during the second trip through. He opened up three or four seconds on Van der Poel, who got caught up on the stairs and appeared to respond sluggishly. Van der Poel regained Van Aert’s wheel on the start/finish stretch, but early in the race, it was clear Van Aert was ready to take the fight to Van der Poel. Conversely, would his aggression prove costly later on?

During the third of nine laps, Van der Poel took his turn leading the way. Van Aert had to run one of the steep ups and Van der Poel got his first taste of time off the front. Van Aert closed the gap, but the effort required him to burn a match through the start/finish straight on the motor speedway.

Behind the lead duo, Sweeck was coming on strong. He caught the two Telenet Fidea teammates in third and fourth and then kept riding into a solo third position. He was showing form rarely seen since his blistering September start to the season and was ready to give the chase everything he had.

When conditions allow, Van der Poel’s attacks are frequently lap-long efforts that force other riders to match him for five-plus minutes. One of the not-so-secrets to his dominance is no other cyclocross riders can match these efforts.

After Van Aert lit a match to regain his wheel, Van der Poel decided there was no better time to rev his engine. He upped the pace early in the fourth lap and quickly had a four-second advantage on Van Aert. Instead of resting, he stayed on the accelerator and put pressure on his rival. Van Aert could not match Van der Poel’s pace. In just one lap, Van der Poel’s lead was 14 seconds. His lead would grow each of the next four laps before topping out at 50 seconds with one to go. Van Aert had no response and began to fade as the race went on.

The win was Van der Poel’s 5th World Cup victory of the season and his 19th of the season. He was back and feeling much better after a week of illness. Perhaps his toughest competitors this year are those about 400 nanometers in stature. As the race progressed, Van Aert suffered the effects of his early efforts. He slowly faded while Sweeck picked up ground on him each lap. Sweeck finally made the catch in the penultimate lap, and the two headed into the bell lap wheel-to-wheel. Sweeck attacked at the beginning of the technical section, but Van Aert countered and re-took the lead at the stairs. Sweeck again attacked at one of the ascents and grabbed the lead for good. He used his power to hold off Van Aert in the power straights to grab second. It was his first World Cup podium since finishing second at the Jingle Cross World Cup. 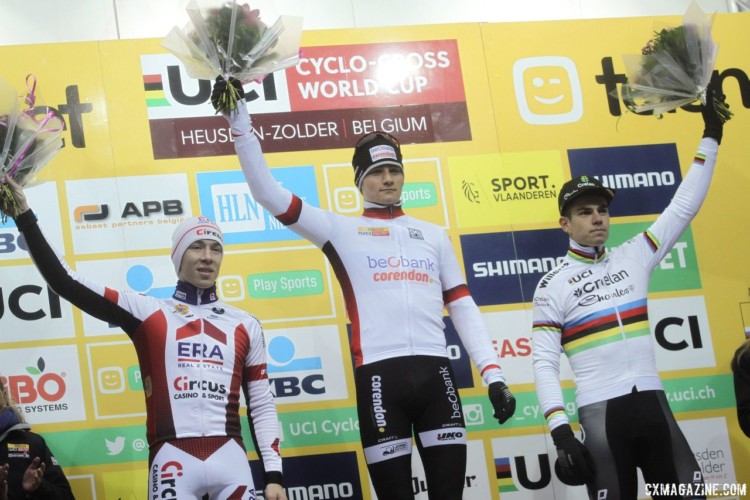 Stephen Hyde (Cannondale p/b Cyclocrossworld.com) headed to Zolder looking to build on his 11th-place finish at World Cup Namur. Hyde recovered from a so-so start and rode to a 13th-place finish for the afternoon.