Spectators were treated to exciting racing throughout this second day of Rapha Super Cross Gloucester as competitors battled hard in all fourteen categories of racing on a course even drier than yesterday’s. After thousands of tires passed through the course yesterday, continuing throughout the day today, the ground was chewed down into sand, exposing rocks, roots, and loose corners where before there had been none. The fast course required excessive power, but racers also needed plenty of handling skills in order to remain upright through the sandy corners. The second day of the Verge New England Cyclocross Series presented by Stan’s NoTubes and Cycle-Smart saw many hard-fought battles for lead in the Series competitions. Halfway through the race, Arely Kemmerer was the rider to beat with a sizable gap. Only Mani was able to catch her in the end. © Andrew Reimann

The Elite Women lit up the start, with Arley Kemmerer (PB2 Pro Cycling) speeding up the start straight to move into an early lead. Emily Zaveta (Amy D. Racing) jumped on her wheel, and Helen Wyman (Kona Factory Racing) and Gabby Durrin (Team Neon Velo) quickly followed. Crystal Anthony (Optum p/b Kelly Benefit Strategies) chased the group of four, but it was Caroline Mani (Raleigh/Clement) who managed to bridge to the leaders.

Mani’s broken wrist makes sprint starts and standing attacks next to impossible, so her style this weekend has been to surge steadily until she catches the lead group. Kemmerer attacked and built a gap, but Mani hadn’t yet finished her surge.

As Maghalie Rochette (Luna Pro Team) bridged to the leaders, Mani caught Kemmerer and powered right through her. Mani continued an amazing ride to win the race despite her injury. Kemmerer’s ride was decidedly strong, and she finished second. Rochette finished third after attacking the chase, claiming the U23 Women’s lead in the Verge New England Cyclocross Series. Mani claimed the Elite Women’s jersey in the Series from Wyman, who finished fourth today. Erica Zaveta, rider for the Amy D Foundation, was able to stay with the leaders for most of the race. © Andrew Reimann

“Racing is really painful right now, but the huge crowd cheering today really helped me forget about the pain,” said Mani of winning today and taking the Series lead – despite her injury.

Jamey Driscoll Picks Through Pack for Second Place, Powers Gets Another Win Next up, the Elite Men stampeded onto the course, kicking up clouds of dust as they went. Lukas Winterberg (MG-Cycling Team) was on the attack, gaining a gap on the chase very early into the race. Curtis White (Cannondale p/b Cyclocrossworld.com) got to Winterberg’s wheel, and then yesterday’s winner Jeremy Powers (Aspire Racing) shut down their advantage with a huge chase group on his wheel. Powers moved to the front of the group, and was soon on the attack to defend his Series lead. Jamey Driscoll admits that Gloucester is one of his favorite courses, and both days he was able to work his way up the pack for great results. © Andrew Reimann

Winterberg, worn out from the time he spent on the front in today’s heat and dust, couldn’t prevent the motivated Powers from getting away. Meanwhile, Jamey Driscoll (Raleigh/Clement) attacked the chase behind Winterberg and Powers, cranking the pedals and putting major time into the shattered chase. Driscoll sped through the space between him and Winterberg, catching the Swiss rider and passing him in short time.

Driscoll set his sights on Powers, who increased his pace in response to the pressure. Powers maintained his gap to win, sweeping the first weekend of Verge NECXS racing in 2014. Driscoll powered in for a well-earned second, with Winterberg behind him in third. Curtis White finished a strong fourth today to retain his U23 Men’s Series lead. 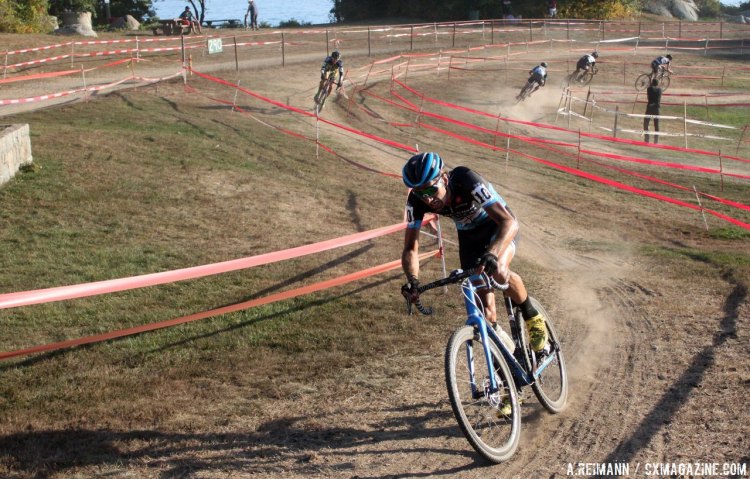 It was another dry day at the Rapha Super Cross, with dust defining the day rather than mud. © Andrew Reimann

Powers, overwhelmed with excitement following his sweep of the first Rapha Super Cross Gloucester, said “The Holy Week of Cyclocross is the biggest event for cyclocross in America. I’m excited to represent my New England roots with these wins.”

New England’s Holy Week of Cyclocross continues next in Shrewsbury, Massachusetts with the Night Weasels Cometh this Wednesday Night. The following weekend, Holy Week concludes with Providence’s KMC Cyclo-cross Festival, a tremendous event featuring a UCI ranked C1 race on Saturday, the only race with that distinction in New England. Saturday’s Elite races will be streamed live on Behind the Barriers TV (BTB TV) in partnership with Bicycling Magazine. Both days will be live-tweeted at @providencecross. Next up in the Verge New England Cyclocross Series is the oldest UCI cyclocross race in the US, the Cycle-Smart International, in its 24th year on November 1 & 2. On November 29 & 30, the Baystate Cyclocross brings technically challenging, always exciting racing to the Chocksett Middle School grounds in Sterling. The season-long battle for series wins culminate with the grand finale December 6 & 7 at the crowd favorite NBX Gran Prix of Cyclocross, on the fast but sandy course in Warwick, RI.

Next post Sanne Cant and Sven Nys Stand Atop the Podiums at GP Soudal Neerpelt 2014: Video and Full Results