The brand that named its first two cyclocross bikes after two rival professional wrestlers threw a party on Friday night, and the specials on the menu were Jell-O shots, PBR Tall Boys, and four steel bikes ready for some mud.

This year at Frostbike, All-City promised to “unveil our latest ’cross creations to the world” and they didn’t disappoint on Friday night. Cyclocross Magazine was first to the scene to see the new line of cyclocross bikes. All-City Cycles started its cyclocross line in 2011 with the Nature Boy singlespeed cyclocross bike, put it on a diet and transformed it into the higher-end, limited edition Nature Boy Zona, and eventually graduated to a geared option with the Macho Man, available in canti or disc brake models. We’ve reviewed the both the Nature Boy and most recently the Macho Man Disc in Issue 21, and loved both, especially the disc version of the Macho Man, although its weight on run-ups made us wish we were built a bit more like a professional wrestler. Perhaps Brand Manager Jeff Frane and his team were listening? Jeff Frane, the brand manager and mastermind behind All-City Cycles, multi-tasking with DJing, listening to product feedback and showing off the new cyclocross bikes. © Cyclocross Magazine

The All-City crew put the Macho Man Disc on a diet and training plan with some higher-end components and the ultralight Reynolds 853 tubing. After winning a “King of the Ring” title, the newer, lighter Macho Man returns as the “Macho King.”

We first gave you a first look at a complete bike option with a photo from the launch here, but now have all the photos, specs and details on this new steel disc cyclocross bike from All-City Cycles, a QBP brand. A Rock Shox Maxle Lite keeps the Whisky No. 9 fork and Velocity hub aligned and rolling on the Macho King Limited. © Cyclocross Magazine 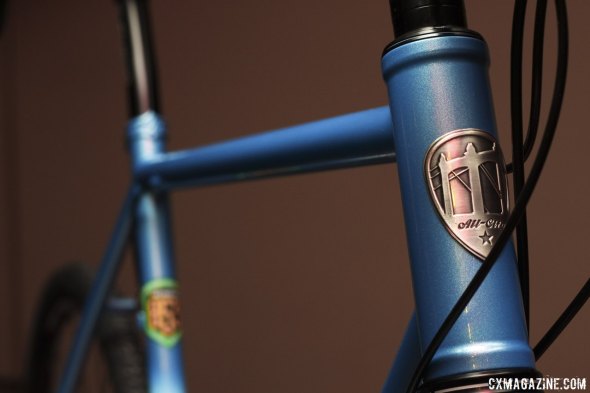 Both complete builds will feature Iron Cross rims mated to Velocity hubs and Clement MXP clincher tires. Check out the bikes and parts spec in the photo gallery below.

Note that a few components shown are not production spec, as All-City Cycles is waiting for a few upcoming SRAM products to complete the build, including hydraulic disc brakes on the Limited and a not-pictured 11-speed SRAM group (might we see a SRAM Rival 11 shortly?). Availability will be Summer 2014, in plenty of time for the cyclocross season. 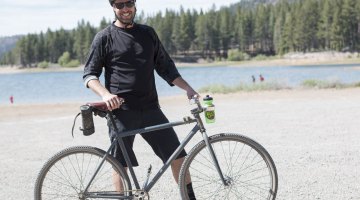