In an alternative world where Mathieu van der Poel (Beobank-Corendon) and Wout Van Aert (Crelan Charles) have given up cyclocross for the road or some other endeavor, Lars van der Haar (Telenet Fidea Lions) is possibly the next great cyclocross racer. The 25-year old Dutch rider has won two U23 World Championships, a European Championship, and a silver medal at the 2016 World Championships during his young career. And yet with Van der Poel and Van Aert dominating the 2016-2017 season and Van der Haar recovering from an early-season hamstring injury, the young Dutchman has largely been an afterthought this season. On Sunday in Hoogerheide, Van der Haar reminded folks he is still pretty good at cyclocross and a rider who is peaking at the right time heading into the World Championships next Sunday.

With road season underway at the Tour Down Under, Van der Haar used some road tactics of his own to ride solo for his first World Cup win since Valkenburg in 2015. The fast, icy course at Hoogerheide rode much like a grass criterium, with a large group of riders assembling at the front of the race. Van der Haar put in a powerful attack midway through the race and his new Telenet Fidea teammates used some effective team tactics to hold up the chase, allowing Van der Haar to escape and ride solo to the victory. When Mother Nature and the local parks department allow American riders the opportunity for a mudfest, they often like to refer to it as “real cyclocross conditions,” so named because of the racing conditions often created by the dreary, wet weather of the Low Counties from December through February. This season, however, the rain and mud has been largely absent, and tough conditions have lately been created by significantly-less-fun-to-ride-on ice.

The 2016 Hoogerheide World Cup was a muddy mess, but on Sunday, the course was the polar opposite, with ice replacing the mud. Lap times were blazing fast in the Men’s race, but there were still a number of corners that were made much more technical and challenging by the veneer of ice remaining in the temperatures that hovered just above freezing.

Riders Vie for Position Early On

The open, fast conditions on the Hoogerheide circuit meant the race was likely to play out like a grass criterium, and that proved to be the case early on. As he often does, Mathieu van der Poel took the holeshot and drove the pace early on in the first lap. However, unlike many other races, a large group of riders strung out behind him much like the ants marching one-by-one, but on bikes. Positioning within the group was important because one slip from a competitor could spell doom for any rider not on the front, as Katerina Nash learned earlier in the Women’s race when her teammate Eva Lechner slipped out in front of her. Corne van Kessel was the first lead rider to crash when he slipped out on the same downhill left-hand turn that claimed Katie Compton as a victim. In this case, however, Van Kessel would be able to recover and get back to the front of the race.

As Sunday’s race entered its middle third, the question fans were asking is “When is Mathieu van der Poel going to attack?” If Van der Poel is unable to get away solo early on, he has often made a mid-race attack to free himself from his competitors. At Hoogerheide, the answer would be at the end of lap 4. Van der Poel took the lead heading into the “Stairway to Heaven” run-up, and broke off the front of the lead group with Clement Venturini. For a moment, it appeared Venturini would play the part of the fallen Toon Aerts (Telenet Fidea Lions) as the one rider who can hang off the front with either Van der Poel or Van Aert.

On Sunday, however, Van der Poel did not have his usual magic, or perhaps his legs were tired from the two-week training block in Spain he recently completed. Van der Poel and Venturini got swallowed up by the group, and it was back to group riding at the front again.

The next rider to test the waters was Lars van der Haar. Shortly into the fifth of ten laps, Van der Haar put in an attack of his own. American racers often call courses like Hoogerheide a grass criterium, but on Sunday, the Telenet Fidea Lions were able to make it a true criterium by using some team tactics to help Van der Haar establish an insurmountable lead.

As Van der Haar went off the front in one of the more technical parts of the course, his teammate Tom Meeusen grabbed second position and slow-pedaled through a few corners as his fellow Lion raced away. The team tactics, and Van der Haar’s commitment to strong effort, gave Van der Haar a 15-second lead at the end of the fifth lap. Van der Haar said he was a little surprised to get such a big gap, “It was very unexpected. I was struggling a bit in the beginning, but then I came back in the race. [Mathieu] van der Poel did a hard lap, and I thought I’d go to the front and help him and go on. At that point, I think Van der Poel thought ‘It’s ok to let him go.’ Behind him were some teammates of mine, and that gave me a really big gap in a short period of time, and then I was alone.”

During the next lap, as often happens in road races, no one took up the task of chasing down Van der Haar. As the chase group dallied and jockeyed for position, Van der Haar extended his lead by an eye-popping 22 seconds during the sixth lap and essentially clinched the victory at Hoogerheide.

No one would come close to Van der Haar for the rest of the race. He rode a flawless solo effort off the front to win his second race of the weekend after winning the Internationale Cyclocross Rucphen in the Netherlands on Saturday.

As Van der Haar closed out his last lap, he could be seen smiling to course crossing marshalls and pumping his fist for the Dutch fans lining the finishing straight.

“It was special. That last lap I couldn’t stop smiling.”

Many times this year we have covered the race for “best of the rest.” However, in this case, Mathieu van der Poel was one of the riders vying to be best of the rest. When the race entered the bell lap, it was clear Van der Poel did not have the legs to compete for a spot on the podium. There was, however, a group of six riders with a shot to pick up the last two podium spots: Meeusen, Van Kessel, Venturini, Tom Merlier (Crelan Charles), Kevin Pauwels (Marlux-Napoleon Games), and Gianni Vermeersch (Steylaerts-Verona).

Early in the lap, Meeusen and Van Kessel went to the front to try to secure the Telenet trio on the podium. A mid-lap crash took Merlier out of contention, and before the one steep off-camber, Venturini took over second position.

Venturini could not hold his position, and Van Kessel and Meeusen re-took the second and third spots as the riders crested the Stairway to Heaven. Van Kessel was the first of the duo to drop down onto the long finishing straight, but Meeusen topped him in the finishing sprint to add a second to go with his third at Fiuggi. Van Kessel held on for third, and Venturini and Pauwels rounded out the top five.

The full Team USA Worlds contingent took the start line at Hoogerheide. Stephen Hyde (Cannondale p/b Cyclocrossworld.com) was the top finisher in 27th place. Hyde had a front-row call-up, but went over his handlebars on one of the icy corners early in the first lap and had to work his way back from near 50th place to finish in the top 30. Scroll down past the results table for the full photo gallery 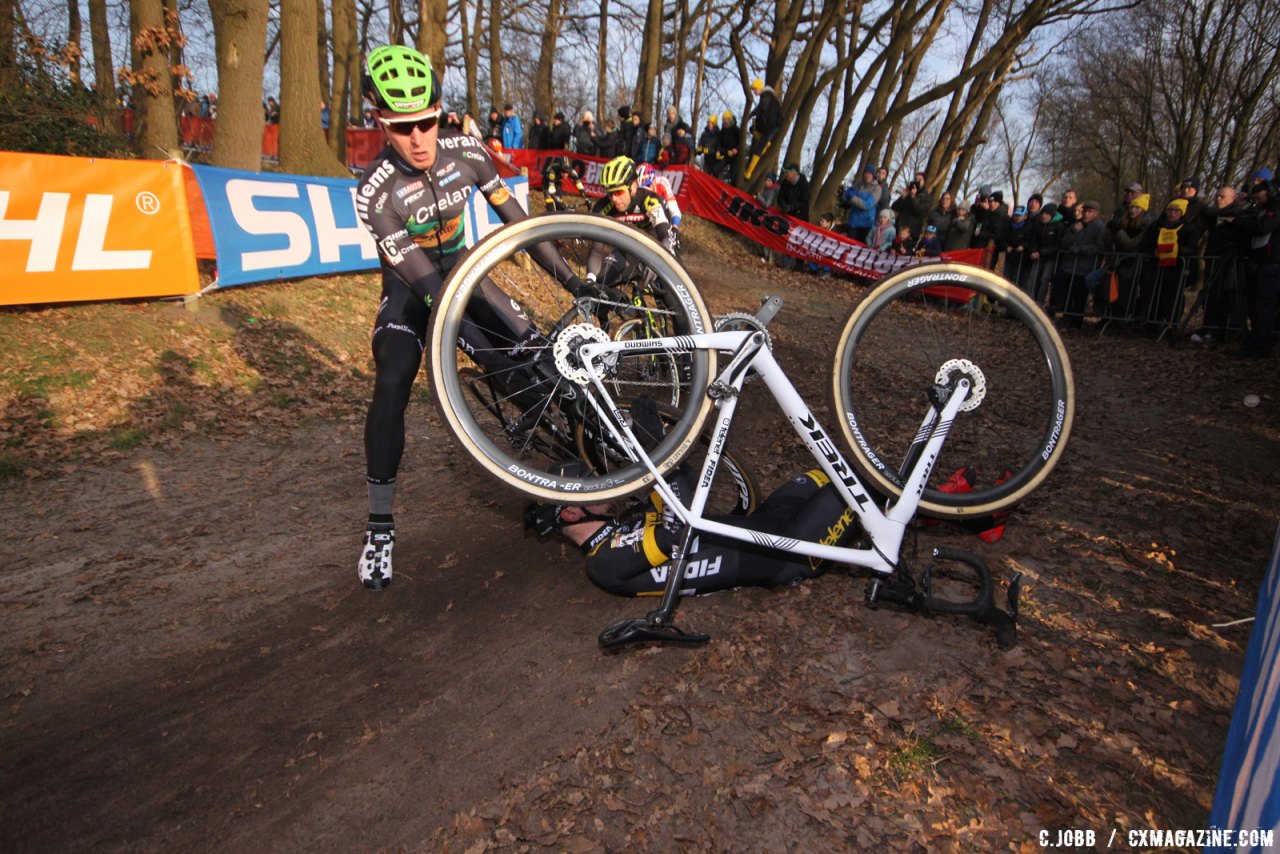