Lars Boom, the 2008 Elite Men’s World Cyclocross Champion, scored his first career win at the UCI ProTour level today by attacking to victory in the 15th stage of the Vuelta a Espana. It’s both good and bad news for cyclocross fans. Good in that ‘cross fans can celebrate Boom’s success. Potentially bad in that road success may mean we’ll see less of the Dutchman playing in the dirt.

Boom was part of an escape group of thirteen who got away from the peloton at kilometer 66 of a 168 kilometer stage. Boom, who has been both the Dutch Road and Time Trial Champion soloed to victory 1 minute and 36 second ahead of the nearest challenger, Spain’s David Herrero.

After three straight days of challenging mountain top finishes, Boom, who sat 65th on the overall classification, 1:20:01 down on overall leader Alejandro Valverde, made it into the day’s main break, containing 13 riders representing 11 of the race’s entered teams. The previous three days of non-stop action meant that many in the peloton were content to have a “day off.” The break’s chances of success were evident as the peloton let the advantage of the leaders balloon out to almost 20 minutes! The group maintained their amicable work rate until the sign for 25 kilometers to go appeared on the horizon. The day’s route twice took the race over the San Jeronimo, a category two climb. The profile was perfect for the combative types to strut their stuff, and Boom did not disappoint.

Just following the first ascent of the San Jeronimo, Boom, along with Milram’s Dominik Roels, Columbia-HTC’s Vincente Reynes and Xacobeo Galicia’s Serafín Martínez attacked the escape group, just past the 25 kilometers to go sign. The four remained together as they hit the slopes of the San Jeronimo for the second time when Boom hit the accelerator to rid himself of everyone else. At the top, Boom was holding an advantage of 53 seconds over Horrero, who had ridden through Boom’s initial attacking counterparts. From there, the Dutchman, who is a renowned time trialist, just had to stay on his bike and maintain his advantage as he dropped down from San Jeronimo. Boom not only maintained the advantage, but opened it up with every pedal stroke, to eventually cross the line more than a minute and a half ahead of Horrero.

Lars Boom proved that Rabobank is making a good investment in moving him up from the Continental squad to the ProTour squad. We are all hoping that Boom will carry his current form into the Cyclocross season so we can all be treated to some exciting battles throughout the winter!

Next post Canada Gets Ready for National Championships in Edmonton

Video: Bike Skills for When Hand-Ups Get in the Way 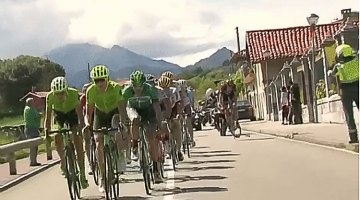