Before there was Denise Betsema, breakout star of 2018/19, there was Kim Van de Steene of the Tarteletto – Isorex team.

Although it may seem like a season ago at this point, for two weeks in October and November, Van de Steene was the toast of the cyclocross world.

After a fifth-place finish at Kermiscross Ardooie, Van de Steene dropped a big attack on Sanne Cant, Alice Maria Arzuffi, Annemarie Worst and so many other top-level cyclocrossers to win her first career race at Superprestige Boom at the end of October. 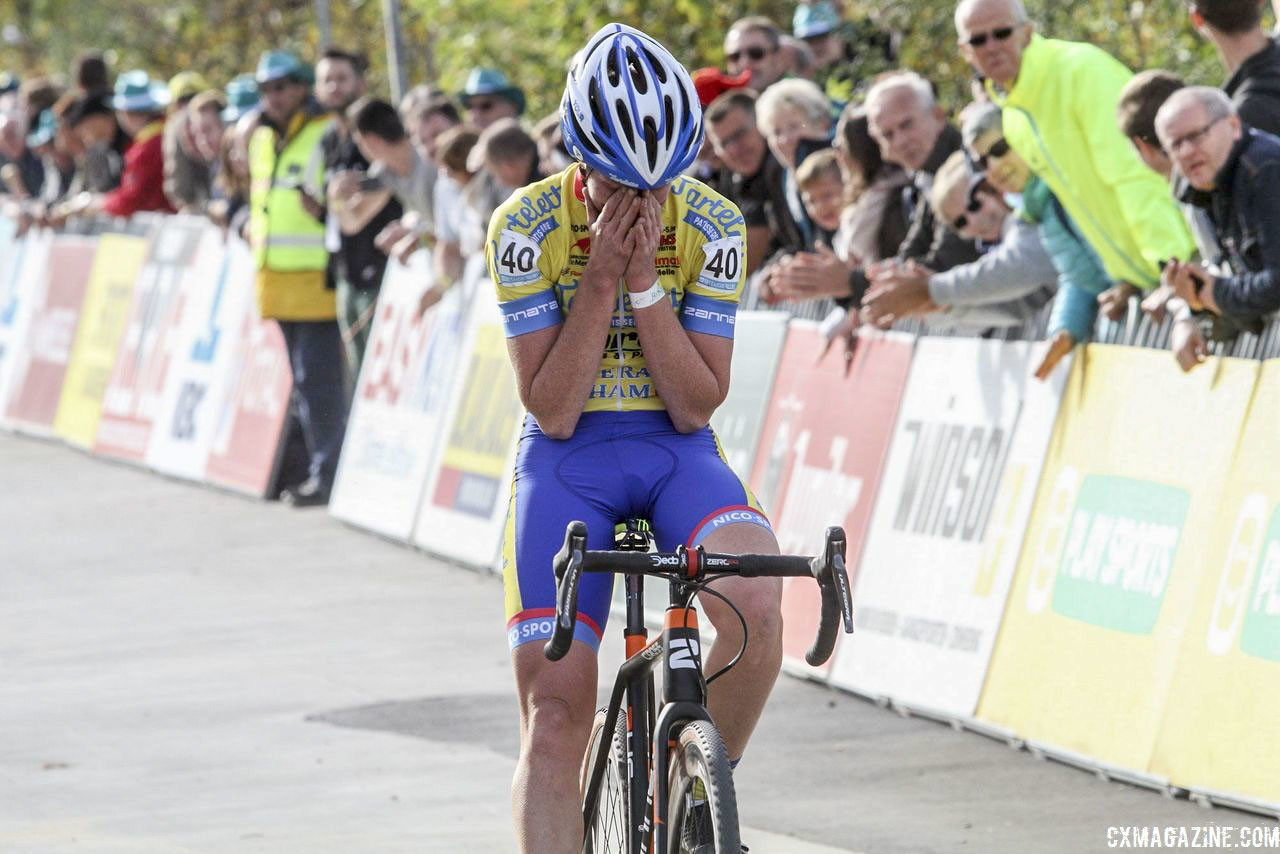 A week and a half later came the biggest win of her cyclocross career when she conquered the cobbles to win the annual November 1 Koppenbergcross. Winning at the Koppenberg is special for any rider, but as she noted via a gesture at the finish, it was extra special because it is the favorite race of Jolien Verschueren, who is currently fighting cancer.

The literal top of the Koppenberg would prove to be the figurative apex of Van de Steene’s season. She finished 11th for Belgium in her first European Championships and then less than a month later, raced her last race of the season at Zilvermeercross Mol on December 12.

Despite being ranked #36 in the world and having the best season of her career, Van de Steene stopped racing a month short of Belgian Nationals and two months before Worlds. The top of the Koppenberg would prove to be the figurative apex of Van de Steene’s season. 2018 Koppenbergcross. © Bart Hazen / Cyclocross Magazine

Like Betsema, Van de Steene has had a long road to “making it” as a cyclocross racer. Although Van de Steene is older than her counterpart at 32 years old, like Betsema, she is a mother of two after giving birth to her son Jonas in 2014 and her daughter Roselien in 2015.

Van de Steene grew up on a farm, and while she was starting her new family, she was also working 80 hours a week on her parents’ dairy farm. Prior to the 2016/17 cyclocross season, being mom, bike racer and farmhand became too much for the Belgian.

In an interview with Wielerverhaal, Van de Steene described her race-day experience.

“Previously a race day began with breastfeeding at night, getting up at half past 5 and milking cows, then breastfeeding again and then leaving for the competition. So actually I was tired before I started. That is a bit different now.” (translated)

She stopped working on her parents’ farm and instead took a part-time job working at a hospital. As she said in another interview with Wielerverhaal, that was the first time since picking up cyclocross in 2011 that she finally able to train regularly. This season, she was able to train for a peak at Koppenbergcross, and it paid off in the biggest way. It was against that backdrop of pushing herself as a bike racer, mom and daughter that, as this story by Sporza describes, it all became too much for Van de Steene in December.

After dealing with fatigue following Mol, Van de Steene soon found herself in the hospital for several weeks.

“They suggested to me to stay in the hospital for a night, and after all, it turned out to be five weeks,” she told Sporza. “I only slept the first two and a half weeks. I felt guilty because I could not take care of my children and I could not deal with that.” (translated)

The story indicates that Van de Steene is now recovering, but she has not started training with an eye toward next season. Even a farmer’s daughter raised to push through all challenges, Van de Steene said she is learning that there comes a time to take a step back.

“I first want to get back in physical order to be able to work again, after which I can only think of sports again,” she said to Sporza. “I know that I have to listen to my body, but I also know that it will always be difficult for me.” (translated)

The translated Sporza story is worth reading for more on the challenges Van de Steene has dealt with this season. We wish her the best returning to good health.