Compton and Vonn Agree to Two-Sport Race for Charity

Thirteen-time Cyclocross National Champion Katie Compton and World and Olympic Champion skier Lindsey Vonn have agreed to a duel this spring at Vail resort in Colorado. Both Vonn and Compton are legends in their respective sports and a conversation between Compton and Cyclocross Magazine at Jingle Cross planted the seed.

Vonn has said that she’d like to race with the men at the World Cup level. When asked if Compton had the same aspirations, she was quick to quash the idea. 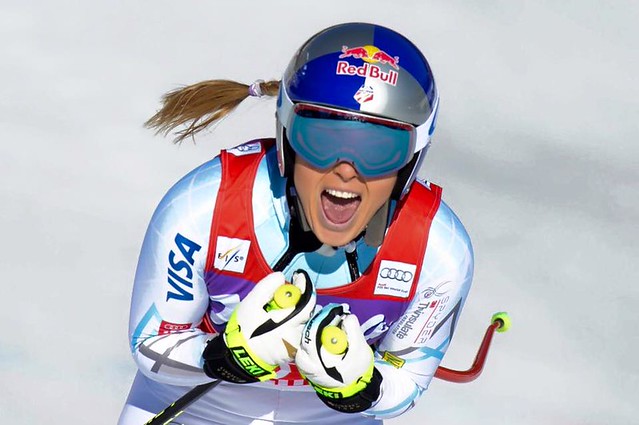 “Nope, Vonn can have it,” said Compton. “I have no desire to race the guys.”

Compton has famously beat up on many of the Cat 3 Men in Colorado cyclocross racing, but isn’t motivated to cross the (red) tape in professional racing.

“So, then, head to head, who wins a bike race, you or Vonn?” asked Cyclocross Magazine.

“Oh, me, for sure,” replied Compton. “No way she’s taking me in a bike race. She’s got some strong legs and rides a lot for cross training, but I’ve got skills.”

“How about a ski race then?”

“Yeah, she’d take me in the downhill, but I might take her going up,” Compton said.

Six months later, the Iowa City seed planted by David Mable has finally sprouted. Compton reached out to Vonn after her season concluded and agreed to a unique two-sport race to be live streamed to raise funds for charity.

The two will ride fat bikes uphill, at which time, they will switch to downhill skis and tackle a parallel course going down, and all for a good cause.

“We’re doing this to benefit the Women’s Sports Foundation,” said Vonn. “It’s a national organization we can both support, as it advocates for opportunities for girls and women in sports.”

“It will be great fun to battle Compton,” continued Vonn. “We’re both in our offseason and both have our strengths in this challenge. She may get to the top before me, but I’m pretty sure I’m a better skier. If I can stay within 30 seconds of her by the top, I’ll take the win.”

Grete Eliassen, President of the Women’s Sports Foundation, sees this a great opportunity to highlight two of the top women in sports today, who have both risen to, and have remained at the top of their respective sports for many years.

“It’s a very exciting race,” said Eliassen. “I can’t wait to watch it myself. I really respect each of those two ladies who are the best in the world at what they do, and are such good role models for young athletes, regardless of gender.”

“I hope I can put enough time in her to stay in front,” said Compton. “I’m okay on skis, but she’s obviously going to be faster than me coming down. Mark is already building some barriers for the uphill section that we hope will really slow Vonn down.”

The race will begin and end at Vail Square at Lionshead at 11 am on April 15. But that’s tax day you’re thinking? Tax day this year is on April 18, but that doesn’t mean the two-woman duel won’t be taxing. They will race fat bikes up Simba to the top of the Eagle Bahn gondola, and will then race a loosely-set giant slalom course down the blue-green Born Free run. The entire event is expected to take approximately 40 minutes—a duration that should favor the Colorado Springs-based cyclocrosser.

For more information on the upcoming event, visit the Women’s Sports Foundation on Facebook, and stay tuned for the live stream right here on Cyclocross Magazine.

Note: This story was published on April 1. Thanks for reading.