Stephen Bassett had the chance most kids only could dream about: to represent the US in the World Championships of Cyclocross, held for the first time in the States. He took home 31st place in the 17-18 race, and here, he tells us all about how the race week played out for him.

The Monday after nationals, just as I was trying to reconcile myself to not making the Louisville team after the start line crash and an untimely flat at nationals, my friend Greg Miller, a cycling fixture in Knoxville, called to tell me, “You made the Worlds team!” I was transported from disappointment to exhilaration because I had achieved my goal of the last two years.

I had good training at home leading up to the race. I also had the benefit of two ice storms, which prevented outdoor riding, but gave me two extra Fridays off school to get my preparation in and have more time to rest.

One of the reasons I was so excited about being able to race Louisville is that it is only four hours from my hometown of Knoxville. This meant that not only could I easily drive up, but also that many of my friends could make it up to watch. My cyclocross team, Bob’s Red Mill, and my road team, Texas Roadhouse, are both based in Louisville, and the trio of Tennessee supporters, Bob’s, and Roadhouse meant I had a huge base of supporters at the race.

Hanging out and riding with the juniors and other members of the USA team in the days preceding the race was a pleasure. As Tim Johnson pointed out as we were taking our group picture, “Worlds has never been here before. It probably won’t be here again for a very long time. Enjoy it.”

I felt comfortable on the course on Thursday when it was muddy. Friday, as the track had hardened into a series of frozen ruts, I was a little nervous at first so I made sure to do a few extra laps and by the end I was comfortable once again. Heading uphill on the course that he’d dialed in on Thursday. © Mike Albright Photography

Race day arrived and a light layer of snow had covered most of the course. I debated between which set of tubular tires to use: Challenge Fangos or Challenge Limus. In the end, I decided that the more aggressive side knobs on the Limus tires would be helpful in the turns and off camber sections.

My warm up for the race went well and we all went to roll up and down the start straight until staging. I was called up dead last at 33rd. I was really relaxed at on the start line, and then somebody yelled to me that I had a flat. I remember saying, “Oh. That’s not good.” Hot Tubes Coach Toby Stanton was just across the fence and generously offered to let me use his rider’s front wheel and helped me adjust my brake. I was still calm through all this until the official called out “1:30 to start” but all I heard was the “30 seconds to start.” I still had two jackets on and frantically started pulling them off and tossing them to the side. Then the official gave us the one-minute warning and I realized that I had misheard him.

I had a good start, moving up to mid-pack by the turns at the bottom of the field. I started getting passed when I slipped and made mistakes on the slick sections of the course. I caught a group of about six or seven at the top of the rock stairs but dropped my chain and lost them again. I crashed a few times on the ice and dropped my chain one other time.  I was in or near last place on the course for the last few laps, but the support all the way around the circuit was just incredible. My friend Jeremy had ordered up a bunch of orange Stephen Bassett Supporter t-shirts, so I had around 30 orange-clad fans cheering me on. Bob’s Red Mill also made sure my U23 teammate Drew Dillman and I were covered with face cutouts dispersed around the course. I hope that I’ll have another chance to wear the stars-and-stripes racing at home in front of a crowd like that again. 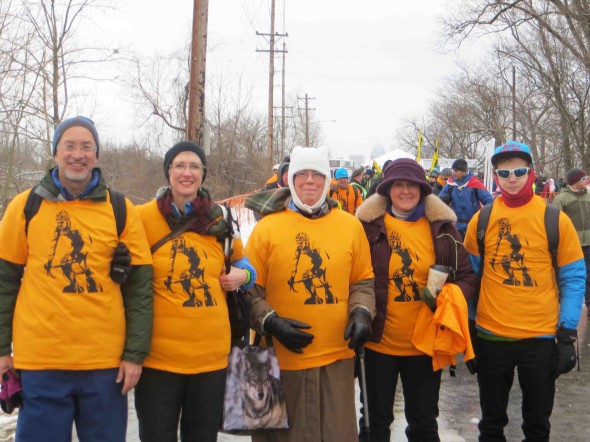 Some of the fan club. © David Bassett

In the end I got pulled with one to go. I was embarrassed. I was hoping to do better based on my results at EuroCrossCamp. However, I got over any disappointment. I had the privilege to be part of an amazing experience that many people only dream about.

A huge thanks to Bob’s Red Mill, Sinclair Imports, Challenge tires, Thomson, and to all the people who worked to help me achieve this goal.

Cyclocross Apprenticeship: The Pro Life, an Elite View and a Heated Warm-Up