In case you missed it, Jingle Cross has thrown its hat into the ring to host a 2016 UCI World Cup event, looking to depart from its December date, and move up to September on the 2016-2017 cyclocross World Cup calendar.

But is Iowa City ready? We take a closer look at the logistics, course setup and get some pro opinions if Jingle Cross is a World Cup caliber event.

Seven or eight times each year, the college town of Iowa City, Iowa hosts a University of Iowa Hawkeye home football game. On each of those weekends, more than 100,000 fans descend upon the Big-10 town to enjoy the game, the revelry, the rivalry. Hotels are filled, restaurants are bustling and the town is abuzz.

But what the UCI wants to know is “Is Iowa City ready for us?” Is Jingle Cross ready to for the World Cup stage? Pro ‘crossers think so. © David Mable

“Absolutely!” exclaimed Jingle Cross race director John Meehan, who recently delivered to the UCI a proposal to host a World Cup in Iowa next September. “There is a football game with 80,000 spectators every other weekend in Iowa City. In fact they just held a wrestling match that set a world record with 42,000 fans! This city is very well prepared for major sporting events and they know what to do.”

If Iowa City is ready, is this the right place? How does the course stack up against other courses in the U.S. or around the world? 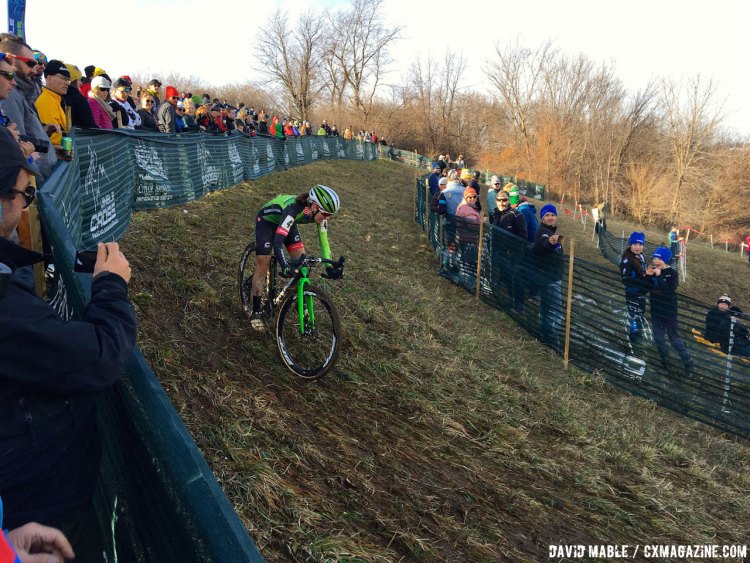 “I think it’s harder than a lot of World Cup courses — harder than Namur,” said Katie Compton after racing up Mt. Krumpit at Jingle Cross for the first time this year.

“There’s a lot you can do with it too. It’s a great venue with really good features, hard features. Going up Mt. Krumpit is very difficult with its super thick, heavy mud—then having to go up the backside, that just makes it harder. A great cross racer is going to win, you need all the skills to go fast, so it’s a World Cup-worthy course for sure.”

I feel I have the best course and best crew in America,” said Meehan. “We were posed with some challenges this year that we have never had. We were stressed to the max, which was good. Between the city, the fairgrounds, our volunteers – everyone came together and all the problems were solved as they happened. So as far as World Cup capability, I think we certainly have it.”

“This is my first time at Jingle Cross,” said Jonathan Page, also competing in the three days of Jingle Cross for the first time. “I’ve heard nothing but good things about it here and I am really pleasantly surprised. The hill behind me here is a little slice of Belgium, like the Koppenberg climb, with mud. It’s really good – I like it here.”

Jeremy Powers, who’s made Jingle Cross part of his routine for several years, agrees with Page and Compton. Mud and climbing make the course. “This is a great prep for Namur, It’s got a similar flow to that race, in climbing and in running,” said Powers. “it is a proper cyclocross course. it has a lot of features, a lot of risk — you could crash on the off camber section and that could end your race and then it was definitely the strongest person winning and that’s what you want, a combination of all those things – it’s a well rounded course and pushes all of us to the max.”

All the U.S. based riders said they would look favorably upon another World Cup date in America, reducing the challenges of traveling half-way around the globe, easing budgets and lifting the sport of cyclocross in the United States, making it accessible to the rabid ‘cross fans in America. “I think it’s super important (to host a World Cup in the U.S.),” said Compton. “If we could have two World Cups next year with Vegas then this race, it would be really great. Cross is growing and for the North American racers, it’s stepping up the racing. It would raise the level of cross here and make us all better and stronger. It can raise the level of women’s racing, get more sponsors, more money, more video, that kind of thing, it all helps cross in general, so I’m all for it.”

With riders in favor of it, a willing host city and challenging course, the rest it seems, is up to the UCI.

“I think the World Cup needs to be exactly that — a World Cup,” said Meehan. “Right now the UCI World Cup has been isolated pretty much just in Europe, but i think the UCI has the right vision, and I have to congratulate them on trying to move this outside of Europe into Asia and North Americas and other places. We are willing to help them, when you look at the venue and the ability we have here, we can make that happen.” No stranger to Jingle Cross success, will Jeremy Powers be able to continue his hot streak if Jingle Cross makes it to the World Cup circuit? © David Mable

No decision will be made on the final schedule of the 2016-17 UCI World Cup until after the World Championships at the end of January, but if all goes as hoped for riders, teams and fans, Iowa City will have a bit of an international flavor next September, and the best cyclocross racers in the world will be challenging each other to the top of Mt. Krumpit.

See what Katie Compton, an American with extensive World Cup success and experience, has to say about Jingle Cross as a stop on the World Cup Calendar

Stay tuned to cxmagazine.com as we bring you the latest on Jingle Cross’ World Cup bid. Be sure to check out our Jingle Cross coverage for three days of action-packed racing.