The lion's share of products at Interbike 2015 were related to the exploding market of gravel, including the release of fresh gravel models at Outdoor Demo and in our earlier roundup of the indoor models. However, plenty more companies offered some goodies on the component side of things that certainly received loads of attention, and revealed what demands consumers are making for cyclocross and gravel products.

On the full group side of things, the biggest news was both the showing of the SRAM eTap (with our first ride impressions coming soon) alongside Rotor's new Uno hydraulic shifting/braking system. The hydraulic system was developed in collaboration with Magura.

We were able to run through the gears of Rotor's Uno hydraulic drivetrain, although we were not allowed to take the system for a spin. Rotor touts the benefits of hydraulic being ideal for cyclocross, since the hydraulic fluid will eliminate the need to replace cables and housing after every race.

Wondering about the brake options with the new Rotor Uno hydraulic levers? The Uno system will work with Magura's hydraulic rim brake and disc brake calipers, addressing the needs of road, gravel and cyclocross racers and riders. Check back soon for more on this system.

Finally, we were able to follow up with our Outdoor Demo power meter look at 4iiii's Precision power meter with the latest left-based crankarm power meter technology at Interbike. Pioneer gave us a first look at their latest power meter that will adorn the bikes of the Maxxis Shimano Cyclocross Team. One of the Parlee team bikes were on display with a compact gravel set up that included Pioneer's Dual-Leg Power Meter. 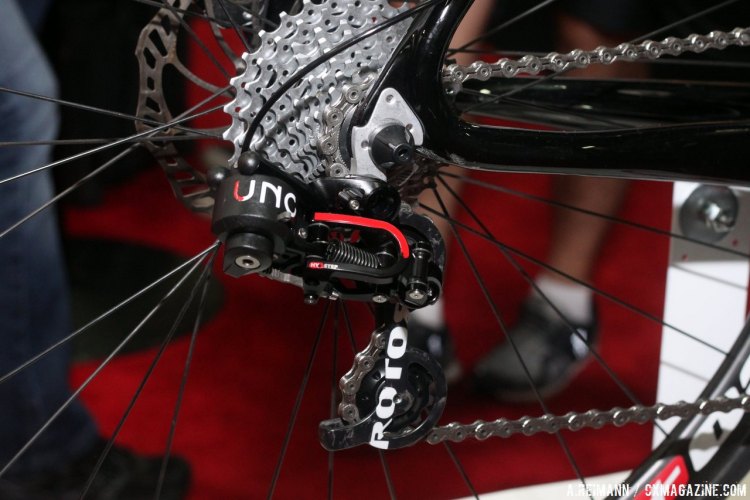 The Rotor hydraulic shifting group has hydraulic hoses as thin as wires from an electronic group, and should mount easily on any bike. The UNO shifters look a bit like SRAM DoubleTap, shifts in a similar fashion (long throw to downshift, short throw for upshift on the right/rear shifter) and feels much like the resistance of a mechanical shifter (derailleurs are still mechanical, just actuated by mineral oil). © Andrew Reimann / Cyclocross Magazine