Jamis updates the build on their 2015 Supernova to accomidate the increasing demand for single chainring cyclocross bikes. © Andrew Reimann

Two years ago, Jamis introduced a new category cyclocross race bike, called the Team version of their longstanding Supernova platform, and in 2013, dressed it up with Red Hydraulic 22 and an American Classic Argent Tubeless wheel set. At the Outdoor Demo of Interbike 2014, we were able to get a First Look at the 2015 Jamis Supernova Team. While the frame geometry and certain aspects of the build are identical from years past, Jamis also strove to make updates to adapt to the changing demands of cyclocross. Single chainrings are all the rage, but the Jamis also offers an accommodation for Di2 and bolts for a front derailleur. © Andrew Reimann

The orange and cream colors stand in stark contrast to the matte black and subtle reds of last year’s model, and the Halloweenesque motif runs through from the Fizik saddle to the American Classic rims.

Immediately, Jamis’s Todd Corbitt points out the SRAM CX1, and tells me he was glad he didn’t miss out on that system this year. While the Team edition came with SRAM Red in 2014, few riders will likely consider the Force CX1 a downgrade when noting the drivetrain’s recent success in China’s C1 UCI race. For those not ready to leap to a singlering setup, the frame still carries bolts for a direct mount front derailleur hanger and can be set up with Di2. The top tube has a slight contour on its underbelly, making it a pleasure to both grip and shoulder. © Andrew Reimann

Although Corbitt mentions that the frame geometry has been around for three years now, he points out some subtle changes, and before even motioning to the front fork, he has me lift up the bike by the top tube before shouldering it.

Unlike the Specialized Crux models, where a shouldering mount is clearly visible on the bottom of the top tube, the Jamis Supernova has an almost indiscernible portage area to the eye. From the side, the tubing has a slight tapper, but the real difference is in the feel. The top tube rests firmly on a rider’s shoulder, and somehow feels even better in a grip, which could work well for racers who suitcase their bike far to the side when running over barriers.

While hydraulic disc brakes were also on last year’s model, Jamis redesigned their forks to make use of a thru-axle system. 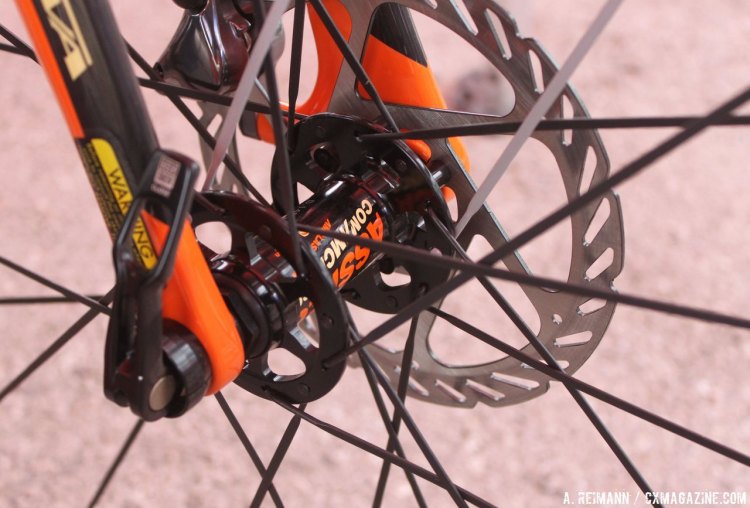 Another big change is the switch to a thru-axle system, shown here with the American Classic hub. © Andrew Reimann

When it comes to wheel and rim choice, however, Jamis sticks with their guns. Similarly to last year, the 2015 Supernova Team will come stock with an American Classic Argent Tubeless wheel set and the Clement Crusade PDX, 700 x 33c. The tires appear taller against the rims than Clement’s tubular PDX tires, which has its benefits and detractions. On the plus side, they look ready to tackle rock gardens and tactical off-cambers. Unfortunately, the beefy Crusade PDX tires also show the tight rear mud clearance of the chain stays. Jamis will be releasing the 2015 Supernova in a matter of weeks with the price tag of $4,500, and they also revealed plans to release an all new adventure bike they call they Renegade in January, with details to follow.