One of the selling points for bringing a World Cup to Iowa was the Belgian-like mud often seen in the region. Iowa, and her September rains, did not disappoint.

As much as 10 inches of rain fell in parts of Minnesota, Wisconsin and Northern Iowa in the past two days. While not that much landed in Iowa City, heavy rains from Thursday night continued to fall into Friday morning turning the Johnson County Fairgrounds into a muddy mess for the first day of Jingle Cross. Helen Wyman doesn't love the dry grass of CrossVegas and skipped the race this year, but found fresh legs and her favorite conditions waiting for her in Iowa. 2016 Jingle Cross Day 1 Night Race - Elite Women. © A. Yee / Cyclocross Magazine

“Amazing. So much mud,” said Helen Wyman (Kona), winner of the Women’s Elite Race on Friday night. “It was just brilliant.”

[blockquote]“Amazing. So much mud...it was just brilliant.” -Helen Wyman after her Jingle Cross Day 1 win[/blockquote]

The rain stopped falling around noon and USAC racing through the morning and late afternoon churned the black Iowa dirt into a peanut-butter consistency by the time the Elite Women took to the course just before 8 p.m.

Sunny Gilbert (Van Dessel) took a very early lead, but when the mud began to wreak havoc on her chain, Wyman took charge and did not look back. With fresh legs from skipping Vegas, Wyman built a sizable lead, with Elle Anderson (Elle Anderson Racing) chasing hard, closing to within a handful of seconds by the finish, but never catching the Brit. Emma White (Cannondale p/b CyclocrossWorld) slogged through the heavy mud to close out the podium for third.

“This year takes first place at Jingle Cross, in terms of epic-ness,” said Anderson after the race. “Oh my gosh, we were driving into town as the first downpours were happening and I just got really excited for the mud.” Time gaps grew quickly, and racers soon found themselves in a lonely spot, riding the heavy course alone, with nobody in sight. 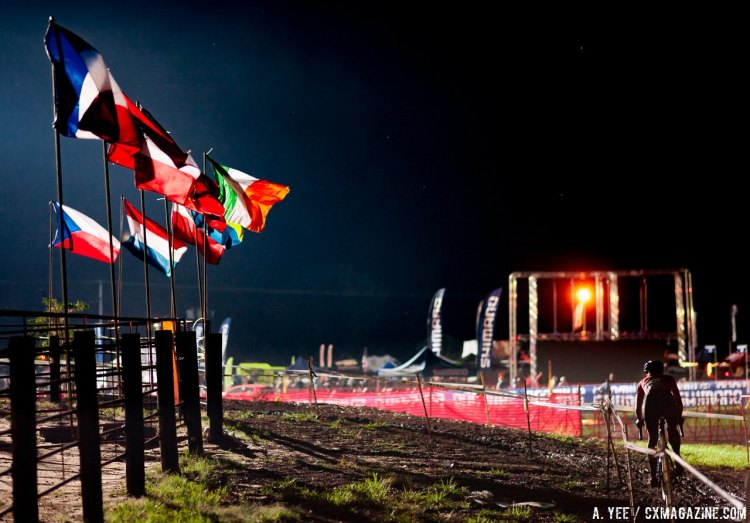 One racer who wasn't lonely at the end of the race was White. Her ride landed her a podium spot and the company of Wyman and Anderson, both with European cyclocross seasons under their belt.

“(I’m really) happy with my result,” said White. “It’s early in the season and this is the time that I need to realize what I need to improve on. I’m looking forward to building on this effort to prepare for the European races later in the year. This is a perfect model for European ’cross.”

Wyman was happy with her decision to skip the trip to Vegas, and made the best of the thick mud to pull off an early season C2 victory. “Mostly I plan the season so that I could be going well at Worlds,” reasoned Wyman. “Vegas is a fantastic race, but I have problems with my breathing in the dry conditions so it's never going to be a good race for me so I made a decision to drop it. And I need to be in top condition in January.”

The course was treacherous due to the heavy rains, clogging rear cassettes and ripping off rear derailleurs. The downhills also were slick, causing numerous spills. The downhill was slick and trecherous, as U23 Ashley Zoerner found out. 2016 Jingle Cross Day 1 Night Race - Elite Women. © A. Yee / Cyclocross Magazine 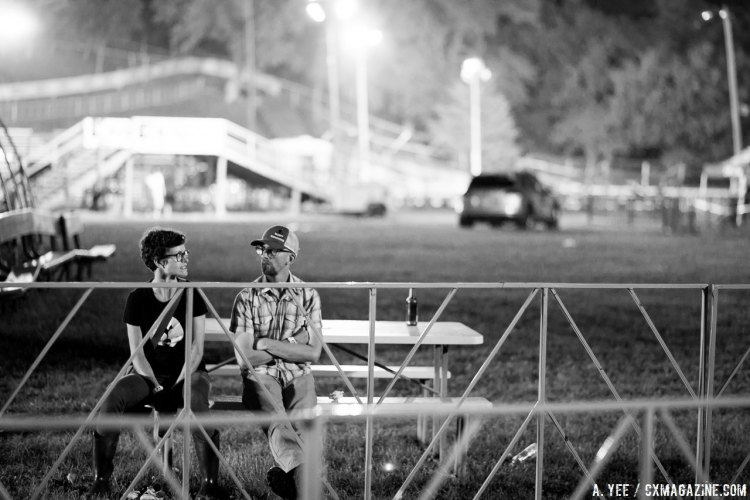