Collecting More Than Just a Suntan in Cyprus – Christine Vardaros wraps up her report from the Tour of Cyprus. If you missed Part One, check it out!

I am checking in from the Stoumont region of The Ardennes – the hilly part of Belgium next to some of the famous Liege-Bastogne-Liege climbs. Jonas and I are spending the week with his family on their yearly Easter holiday. We are also using it as part two of our “base training.” But after coming here directly from sunny Cyprus, it’s a bit of a shock to voluntarily step out of the house for a few hours of training in the icy cold rain where temperatures are hovering at about 8°C. Instead, we have been delaying every ride so far as we sit indoors next to the heater, reminiscing about our fabulous time at Tour of Cyprus.

As for the Tour, the last day of the four-day co-ed stage race was the most fun. With only 1.434 seconds separating the top two guys on the general classification, there was no champagne to be had during the race. On the women’s side, even though I had a gap of over ten minutes on second place, I was too nervous about losing my leader’s jersey due to a flat tire, mechanical or even bad legs that I didn’t start the celebrations until crossing the line.

The last stage was relatively flat compared to the mountains we had to cross in the previous days, so my goal was to hide in the peloton until the end – if I could. The race started with a few heavy rollers where the guys were sure to try and force a split. The pain in my legs and lungs was so intense for those first few climbs while I tried to hang on. Keeping an eye on me for these first few kilometers was teammate Quentin Finn, which was very nice. The descents surely helped for a little recovery, but not too much since the guys were attacking them at almost 90kph. It was surreal to move that fast on a bike. I can’t even remember the last time I descended at speeds like that – aside from the first three stages, that is.

Most of the stage was ridden at speeds of over 60kph, with the Israeli and Malta guys pushing the pace at the front. They had some tailwind assistance of course! As my fitness is nowhere near tops, I spent the majority of the race within the walls of the peloton. Every time we turned a corner, I repositioned myself according to the direction of the wind. This proved especially useful towards the end of the race as we encountered some nasty sidewinds while we rode alongside the Mediterranean Sea. (On a side note, it was almost comical to watch the Dutch riding in the sidewind.  While the rest of the waif climbers were blowing all around, the flatlanders held their places like stones.) I also had an eye constantly on the flow of the peloton so I could follow attacks, like from the Lebanese Team, with as little explosive effort as possible. Going into the last turn at 300 meters before the finish, I was a little too far back in the group to be thick in the sprinting action, which was fine with me since I’d have gotten killed anyway. I rolled across the line in 18th, but that was enough to be the first-placed girl on the day.

The guy’s race was a bit more intense. The way the timing worked, the riders were given the exact time they cross the line.  In other words, all the riders in the peloton had individual times when crossing the line together. With this type of timing system, the two riders separated by one second really had to do something special to make the race their own.  Halfway through, second placed rider Malta’s Maurice Formosa of Team Malita rode alongside me to share his plan of the day – to attack at 3km before the finish. Then he swore me to secrecy, “But don’t tell the Israelis!”

Three kilometers before the finish, off he went. His attack of brilliance was enough to win him the stage, but not the leader’s jersey. The peloton bridged to him on the line, with leader Israeli Gil Kivetz of Team Focus-Israel crossing in third place, less than a second behind, which was enough for him to hold onto the jersey. Finishing in second was Netherlander Rodrick De Munnik. He said before the race that this was his kind of course and he surely proved it, missing the win by mere centimeters.

From there, we all meandered to a nearby square where we dined on bananas and, oddly enough, artichokes as the daily exotic Cyprus food. While everyone gathered around the artichokes and laid out in the sun, I was busy making the most of our few minutes there.  First I had to celebrate my win with the Harley (and one BMW) guys. They called me and Jonas over to their little gathering and pulled out a homemade bottle of Ziverna – similar to Grappa, an 85-proof liquor made of grapes – that they bought at the Winery we visited a couple of days previous. After doing a round of shots, they kindly gave me the rest of the bottle as a parting gift. It was so heavy that it pulled my oversized jersey so far down that it almost covered my ass, but it was well worth it! With buzz in head, Jonas and I got to work on making a little thank you gift for Andy Hadjivasiliou, the Tour of Cyprus organizer. I wanted to get all the riders and support crew to sign my leader’s jersey so I could immediately present it to him after it was presented to me on the podium.

First step was to get the leader’s jersey before the awards ceremony. When I asked the course leader Thomas Wegmüller for it, halfway through my request he cut me off, saying, “yeah, yeah.” At first I was confused that he got what I was doing so quickly. But then later I learned that he has seen and done it all when it comes to behaviors of the peloton. It turns out he is a former Swiss top road racer in the ‘80s and ‘90s with an impressive palmares consisting of successes like 2nd in Paris-Roubaix, 2nd in Tour of Flanders, 4th in a stage of Tour de France and National Champion.  What a stud. It now made sense why he seemed a bit more animated when discussing our “A” racing group every evening during the daily meeting than the “B” cyclotourist group that followed behind us in every stage. He now runs a bike touring company in Cyprus.

With jersey in hand, we went about collecting signatures. Out of maybe 130 riders and support crew, we probably got about 100, which isn’t too bad considering the hustling it took to make it happen. At the ceremony, when I put the signed jersey on, Andy’s eyes popped out of his head. And when I made the little speech announcing that this jersey is for him from all of us as a token of our appreciation, we could tell that he was surely moved by the gesture. This was the first international road cycling event held in Cyprus, so he had no model to follow and had to create everything from scratch with not even a drop of support from the National Cycling Federation. But he did however score sponsorship from all government officials and organizations that was key in putting together such a large-scale event.

Based on the success of this year’s flagship Tour, I expect it to be twice the size by next year. And considering the time of year it’s held, you can be certain I will again be there working on my suntan while whipping my body back into shape – bootcamp style.  It is perfect “offseason” timing. But next time around I will stay an extra week for more riding and maybe for that elusive umbrella drink that I just can’t seem to snag. Training Tuesday: Write it Down to Take Stock of Your Season and Prepare for Next Year 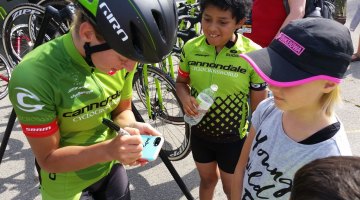