Lindine took his third win in a row at Night Weasels on Wednesday night. © Russ Campbell

SKI WARD SKI AREA, SHREWSBURY, MASSACHUSETTS – New England’s Holy Week of Cyclocross continued Wednesday night with The Night Weasels Cometh, the dirty little cousin of the C1 race weekends at Gloucester and Providence.  Now in its third year, the race continued its streak of muddy conditions, which combined with sometimes-questionable lighting and a sadistic number of off-cambers to provide non-stop “entertainment” for spectators and racers alike.

The elite women’s race was headlined by Mo Bruno Roy (Bob’s Red Mill p/b Seven Cycles), and Bruno Roy did not disappoint, on the hilly, twisty, slippery course suited to her strengths, establishing an early gap and quickly proving that she was the class of the field.  The chase was led by Frances Morrison (J.A.M. Fund/NCC/Vittoria), followed by the group of Kate Lysakowski (Cycle Lodge), Amanda Carey (Volkswagen Boise Cycling) and Anna Barensfeld (pedalpowertraining.com).

After two laps, Morrison was the only non-lapped rider to get a look at Bruno Roy, and as the race wound down even she lost sight of Bruno Roy in the dark and foggy night.  Behind, the 2012 NUE Series winner Carey picked up speed, despite the race being seven hours shorter than her preferred discipline, steadily dispatching Barensfeld and Lysakowski as the night wore on.

In the end, Bruno Roy took home the victory (and a payout superior to that of a UCI C2) with a minute cushion.  Behind her, Carey’s stair-riding antics earned her crowd-favorite status, but could only get her close enough to keep Morrison honest in the final greasy off-camber turns.

The elite men’s race, being non-UCI, featured an exotic mix of racers – local pros, elite masters, and elite juniors, and a number of cat 3’s that were just there to be part of the “party at the back.”

Junior Nate Morse (Hot Tubes Development Cycling Team) took the holeshot and held off 2011 Night Weasels champion Justin Lindine (Redline) for an entire lap, earning himself the CRAFT Hot Lap prime and a fair bit of heckling from the crowd about how he was going “way too haaahd, kid.”  Behind those two, Brian Wilichoski (CYCLOCROSSWORLD.COM), Adam Myerson (Team SmartStop/Mountain Khakis) and Canadian 40+ national champion Todd Bowden (Expowheelmen) led the chase.

Morse, on the adrenaline high of being up way, way past his bedtime, proved the hecklers wrong.  While he was unable to hold the wheel of Lindine, he hung with an attacking Wilichoski for quite some time before settling into the chase group for third with two men more than twice his age, Myerson and Bowden.

Lindine has never lost at Night Weasels, and was soon on his way to the three-peat, gobbling up lapped cat 3’s like a honey badger that had just knocked over a bees’ nest full of larvae.  The mountainous and greasy course led to minimal drafting, and soon he and Wilichoski were both riding individual time trials far ahead of the rest of the field.

The race of the night was the battle for third, with Myerson and Bowden fighting for the title of “top rider over forty” while Morse
refused to go away, like a teenager who’s gonna stand there until you give him the car keys.  Behind them, Alec Donahue (J.A.M.
Fund/NCC/Vittoria) lurked, along with a surging Nick Keough (Champion System p/b Keough Cyclocross), who had lined up at the back for “practice.”

Morse continued to disrespect his elders with a final-lap attack, but a dropped chain on the attack showed that the young grasshopper still had a few things to learn.  Myerson and Bowden, however, stayed locked in battle to the final turns, with Myerson hitting the finish straight first and holding on for the final step of the podium.

Donahue and Keough rode through a heartbroken Morse in the closing minutes and ended up having the tightest finish of the night, with Keough making a pass that was somewhere between “rubbin’s racin'” and “body-checking’s racin'” on the final turn to best Donahue for fifth in the sprint. 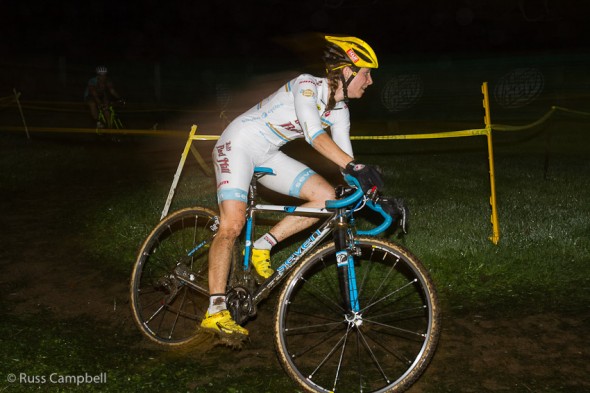