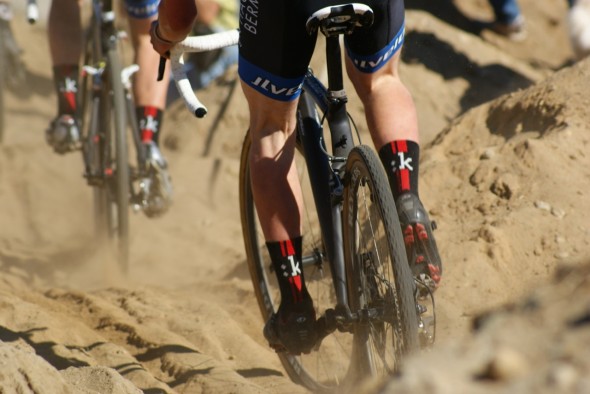 Washingtonians are known for their fickleness to the weather, but we’ve hit a low here as `cross racers are starting to seriously gripe about the warm, sunny weather that’s been featured for every race this fall. With burnt out grass and hard, bumpy courses the masses are starting to conjure up the rain dances and looking for virgins to sacrifice to get some rain and “proper” mud delivered to a race.

All the moaning aside, the Seattle Cyclocross Series hosted their second race of the season just outside the confines of the Arlington Regional Airport on Sunday. Yes, it was sunny and warm, and the racing was fast and furious. The course was a tale of three sections with long straightaways connecting a wooded area featuring roots, loose dirt, and many 180 degree turns. From the woods racers were sent into a loose dirt/silt section that was rideable, but barely. After exiting the dirt, riders faced a mix of tight, twisty turns coupled with sweeping lefts and rights on the burnt out, and at times, slick grass. Several turns on this infield area claimed riders throughout the day as front tires slid out and bodies hit the deck. Once through the turning a set of barriers greeted riders just before the final stretch to the finish line and another long lap.

The Elite Men hit it out with a fast and dusty start. In a similar fashion to last week’s race, three riders were off and away inside the first half a lap with Gian Dalle (Don Walker) leading Steve Fisher (Hagens Berman powered by Raleigh) and Adam “Newt” McGrath (Hagens Berman powered by Raleigh). A group of four consiting of Benji Perrin (Second Ascent), Loren Hanson (Audi/Kryki Sports), Toby Swanson (Eatonville Outdoor), and Morgan Schmitt (Cyclocrossracing.com) would form the first chase group and work to keep things in check. Meanwhile, the lead group of three would would cross the line to begin the second lap and the decisive move of the day would be made. Team tactics would play out as Fisher would get a gap down the long straightaway and teammate McGrath would sit on Dalle’s wheel and let him chase for the remainder of the race. Dalle would get to within five seconds at one point but could get no closer as Fisher kept the pressure on while McGrath hung in the wings. As the final lap came to a close Fisher would take the win and Dalle would get a gap on McGrath to prevent the 1-2 finish for Hagens Berman p/b Raleigh.

The Elite Women stormed out of the gate just after the men’s race. Kari Studley (Redline), racing her second race of the day after winning the Women’s single speed event earlier, would take the hole shot and begin to splinter the field. Right on her tail was Courtenay McFadden (Voler/Bicycle Center) who would manage to get by Studley on that first lap only to relinquish the lead as she crashed on one of the slick grass corners in the infield. McFadden would bounce up and go on to chase Studley down shortly thereafter. Behind this battle four women would form the chase group with Marsa Daniel (Group Health), Karyn Abraham (Blue Rooster), Mel Lewis (CycleU/PopCap), and Lea Stralka (Ragnarok) all working to keep the leaders in check. McFadden, once past Studley again, would go on to create a gap and never look back while taking the win. Studley would take the second step on the podium coming in less than a minute back and Daniel would take third getting across the line just 10 seconds over her other three chase partners who were all separated by only three seconds.

And some other news …

Congrats to Craig Etheridge (Raleigh/Clement) on his win in the SS category. This comes on the heels of an impressive showing at Cross Vegas (a win in the wheelers and dealers race) as well as wins at the USGP Planet Bike Cup (both days) and in St. Louis at the Cross After Dark series Gateway Cross Cup event. The dude is on a role and still smiling!

An additional congrats and shout out goes to Ken Harmon (Fischer Plumbing) who, by way of his 2 straight wins in the Cat 3 Masters 45+ group, will be getting to ride with the big boys as he is receiving a mandatory upgrade for his solid racing efforts. Good luck chasing them and you also get an additional 15 minutes of racing for your money!

Next post Cyclocross in Southern California: A Look From the Outside In

Previous post Video: Sandpit Over-the-Bars Carnage (Without Joey, But Everyone is Okay)