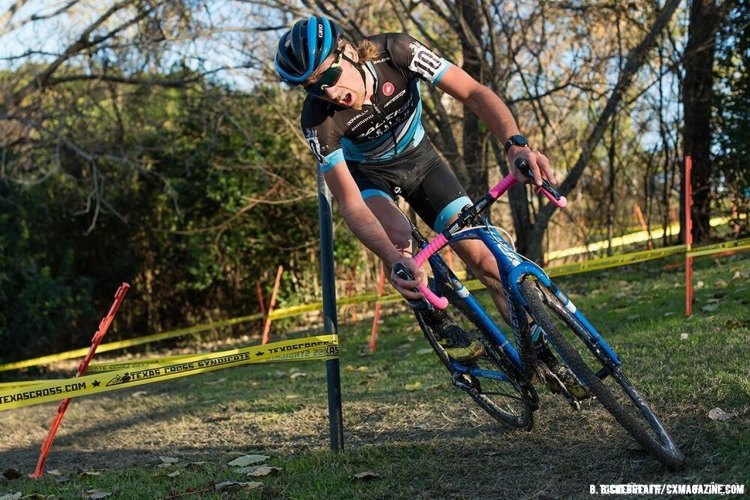 File Photo: Driscoll laid it all on the line at Highlander Cross Cup, day one—and his day two performance was similar—a solo victory by a huge margin. © Bo Bickerstaff

The field stayed together for most of the first lap, with Troy Wells (Team Clif Bar) making the first move, launching an attack after the second pit entrance on the backside of the course. Fresh off of a day one victory, and knowing Wells’ prowess, Driscoll was quick to react, and the two were clear off the front.

Behind Wells and Driscoll, Haidet, Uhl, and Apex/NBX/Trek’s Justin Lindine organized into a chase, doing their best to keep the lead duo’s gap in check .

Heading into lap three, the pace of Haidet and Lindine was too much for Uhl, and he was shot out of the back of the chase group. With a teammate up front, Haidet was content to sit on Lindine. The duo would not make any large inroads to Wells and Driscoll, who had a gap of 10 seconds and growing.

Uhl would be absorbed by the second chase group which consisted of Zach McDonald—aboard his new Alchemy Bikes, Kevin Bradford-Parish (SET/coaching Giro SkratchLabs ) and Kaiser. Chase two would be the most dynamic of the day, with a flurry of attacks throughout the race.

At the front of the race, Wells began to fade on lap four, losing contact with Driscoll and getting swallowed up by Haidet and Lindine, 35 seconds behind the leader. Content to sit in and recover, Wells made his move with two laps to go, establishing a gap that was cut down by Lindine, who crashed shortly after bringing Wells back. This was all of the opportunity needed for Wells, who went again, and was able to stay clear until the finish.

As he has done multiple times on his Texas road trip Driscoll won solo by a healthy margin, followed by Wells. Driscoll’s teammate and U23 rising star Haidet would end up in third.

Keep an eye out for a photo gallery of the day’s racing at the Highlander Cross Cup—coming soon!