The fourth and final round was CXLA, held at Los Angeles State Historic Park near downtown L.A. This flat, fast course is generally not considered to be technically challenging, but with persistent rain showers during the previous two days and another one just as the Elite Women’s race was staging, the slippery, rutty clay proved to be a genuine test of bike handling skills.

Attracted by UCI points as well as a $5,000 purse for the top five in both the men’s and women’s classes, strong fields from around the country made this the most significant cyclocross event ever to take place in SoCal.

Of course the prestigious Cross After Dark title was also on the line, at least in the Elite Men’s division. In a repeat from 2011, Ryan Trebon (Cannondale/Cyclocrossworld) and Ben Berden (Raleigh-Clement) were rubbing elbows at the top of the point standings after three of the four Cross After Dark Series events leading up to CXLA. Berden held a slim 12-point advantage with 3-1-0 scores at the three previous races: CrossVegas, the Gateway Cross Cup in St. Louis and the Cincy3 CX Festival in Cincinnati, respectively. Defending champion Trebon, meanwhile, had gone 6-0-1 at those events.

The men in green and black — Tim Johnson, Trebon and Jamie Driscoll — did all they could to ensure Cannondale/Cyclocrossworld would close the deal and at one point looked set for a podium sweep. Team tactics were highly visible despite the dark and misty conditions, but Berden could not be shaken. With two to go Driscoll shot off the front and in the remaining time would build a ten-second gap. Trebon, meanwhile, found himself in a desperate sprint down the long finishing straight with none other than Berden closing rapidly. The Belgian had put in one of the fastest laps of the night to get up to and around Johnson and then made an impressive charge at Trebon on the bell lap.

No doubt the mental calculators were spinning as fast as Trebon and Berden when the timing strip was tripped. Trebon prevailed with Berden a little over a second behind. But in reality Berden had clinched the Cross After Dark title when he had moved into third and Driscoll took the win instead of Trebon. When the final numbers came up, Berden had claimed the championship by a mere two points, 115-113.

Apparently Berden had everything calculated. As he stated afterward, “I knew I could win the series if someone other than Ryan was to win tonight and I could stay behind Ryan. So my goal was to follow him.”

Trebon, who had led a few laps, showed little disappointment. “It was one of the nastier days I’ve seen in Southern California. It’s really gritty, with tons of mud and sand flying up in your eyes. The bikes are pretty thrashed. But it’s always fun, pretty entertaining. Me and Ben were battling for the Cross After Dark Series but unfortunately I think he got me by a couple points,” he said.

According to winner Driscoll, “My teammates rode defensively for me and I was able to get the gap. All four of us had the legs to win tonight. It was just a matter of playing out the tactics. With a lap to go I felt pretty confident but in these conditions anything can happen. Fortunately I had a great team that helped me out tremendously.” 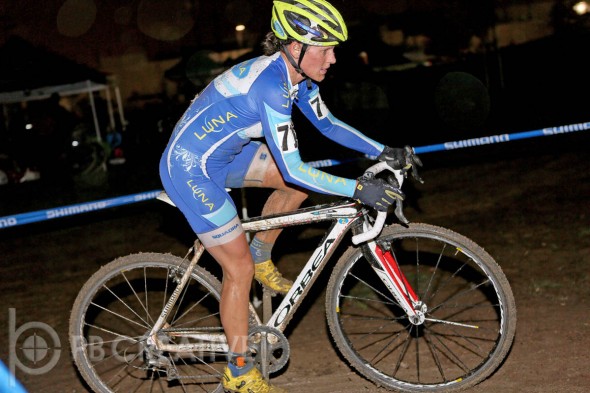 Nash takes the win on the women’s side. © Phil Beckman/PB Creative

The Elite Women’s race was less dramatic, for several reasons. One, Katie Compton (Trek Cyclocross) had already wrapped up the Cross After Dark Series title and elected not to attend CXLA.

Two, Katerina Nash was unstoppable. The Luna Chix rider spent several laps on the wheel of Nicole Duke (Raleigh-Clement) but around the halfway mark put in a surge and was gone. Meredith Miller (Cal Giant), returning from a broken hand suffered eight weeks prior, was able to slide into second, and she was followed across the line by Caroline Mani (Raleigh-Clement).

Nash, who would dominate the next day’s UCI race at CXLA as well, was happy with the evening’s events. “Nicole had a great start and she’s a really good bike handler, so I didn’t mind riding behind. There’s always something to learn from her,” said Nash. “I basically attacked with three laps to go. I thought it was two to go and was worried I had maybe gone too early. Once I went around Nicole I’m not quite sure if she had a problem, but I was on my own. The course conditions were awesome. It keeps changing and it really keeps you on your toes.”

Next post Van Gilder, Milne Win Day One of the NBX Gran Prix of Cyclocross in the Shimano Series