Dieter Vanthourenhout Fights to be on National Team…Again 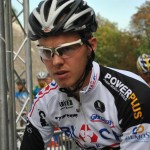 Dieter Vanthourenhout at the line at Namen © Florent Bouchat

Of the four World Cups so far this season, Dieter Vanthourenhout (BKCP-Powerplus) has been given the green light by his National Federation for only three of them. In any other country he would be their lead man, as he is easily one of the best ’crossers in the world.  But unfortunately for Vanthourenhout, he races for Belgium, the heart of cyclocross where the majority of the best riders in the world reside.  With 10 top riders vying for only eight spots available to Belgium per World Cup, it means that for every World Cup two must be left behind.

Racing a World Cup for these men is not just about the prestige. Every World Cup awards them a higher World Cup ranking and a higher UCI World Ranking, which increases a rider’s value and start position for upcoming races. Of those top 10 Belgian riders, six are usually the same faces: Sven Nys, Niels Albert, Bart Aernouts, Bart Wellens, Klaas Vantornout and Kevin Pauwels. The battles for the two remaining spots this season have been between Dieter Vanthourenhout, Tom Meeusen, Rob Peeters and Dieter’s cousin Sven Vanthourenhout. What this means for these four riders is that every time they step up to the line, there’s a race within the race – doubling the pressure. 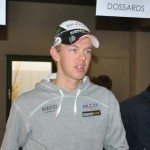 Thanks to a solid off-season effort, Dieter Vanthourenhout started his cyclocross campaign strong with a fourth place in Steenbergcross, a win in Harderwijk, and a seventh in GVA Namen. “It is my goal every year to take a step forward. I have tackled the summer the same way as the previous years with a total of 30 race days on the road, with a 14-day training camp in Spain with the team.  But unlike previous years, I have been altitude training in St. Moritz where I could prepare for the season perfectly,” explained Vanthourenhout of his elevated fitness level. It was enough to earn him a spot for the first two World Cups in Aigle (SWI) and Plzen (CZE).

But while he was building his fitness, so were his countrymates in anticipation of the race within the race to make it on the National Team. With the other guys coming into form, all four seemed to be closely matched in talent. With only seconds sometimes separating Vanthourenhout from the others, a slip in a turn, a trip on the stairs, a bad start, the flu or a missed race leading up to a World Cup can claim his chances. The last two are what kept Vanthourenhout off the start list for the third round of the World Cup held in Koksijde, located near his hometown of Brugge. He had the flu and decided to skip Superprestige Asper-Gavere the week before Koksijde. While he may have been discouraged by the omission, he answered with his pedals with a third place at Superprestige Gieten the day after Koksijde. He was the second Belgian at the finish, which was easily enough to secure a spot on the fourth World Cup round in Igorre (ESP).  Although his 14th place in this event was quite impressive, for the race within the race he was the last Belgian to cross the line.

But the competition for entry into the Kalmthout World Cup December 19th is not over. This weekend Vanthourenhout has two more qualifiers to make the team. They are GVA Trofee-GP Rouwmoer in Essen (BEL) and Vlaamse Druivenveldrit in Overijse (BEL). Normally the guys who come out on top in these races should be given the nod for Kalmthout.

UPDATE: Thanks to Niels Albert taking the World Cup lead away from Zdenek Stybar, Belgium now gets to take a total of nine elite men riders instead of eight. That means three of the four who are usually “on the chopping block” get to go this time around, instead of just two, increasing the odds for Vanthourenhout to make the selection.

No matter the outcome of these races, 25-year old Vanthourenhout remains a rider to watch for the future – something that he is quick to admit. “Maybe if I can continue to get better for the next three years, I can have a chance to be World Champion.” Even so, expect to see him turning himself inside out to make the team for Kalmthout.