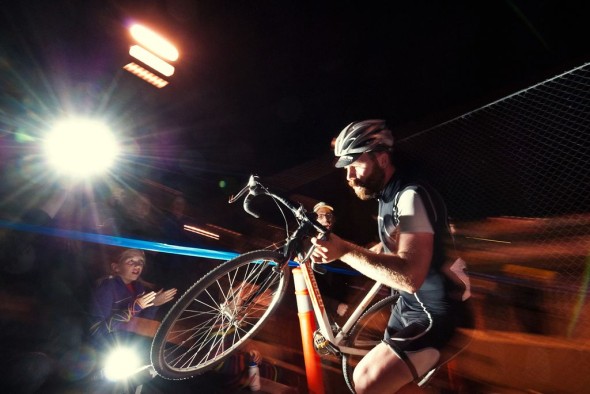 WINNIPEG, CANADA – Cyclocross is known for being an extremely demanding physical workout and a surprisingly good time with easy-going people. How can something that has been referred to as “an hour in hell” also be described as “wild, crazy, and lots of fun”? DarkCross is a cyclocross race takes this apparent ambiguity to heart, and here at Cyclocross Magazine, we embrace that and will be sponsoring the race and their race photo contest. It serves up a fast, challenging race course that will leave riders gasping for air as they run with their bikes right through the heart of the grandstand and its boisterous crowd of cheering, heckling, and cowbell ringing spectators.

As Race Director Chris Huebner puts it, “the goal of DarkCross is to have both racers and spectators shaking their heads in disbelief over how awesome that was. We want to show the wider Winnipeg community what a good time cyclocross can be. And we want to show the Winnipeg cycling community that a world-class cyclocross event can happen here. We think of DarkCross as a big party that’s built around a cyclocross race.” Judging by the response from the first two years, these goals are well on their way to being met. After attending DarkCross in 2012, Daniel Bubis, President of race sponsor Tetrem Capital Management and an experienced competitive cyclist, said “In all my years cycling in Winnipeg, never have I seen an event with the level of fan and rider participation as DarkCross. It was exciting for everyone.”

DarkCross organizers are hoping to push the excitement level even higher at this year’s event. Racers will once again enjoy a unique course which features the Wallace + Wallace Grandstand Run-Up, the Qualico Homes Flyover, and the Cyclocross Magazine Rock Garden. As racers cycle a course that is lit by bamboo torches, Christmas bulbs, and the bright lights of the speedway, the crowd is encouraged to get as close to the action as possible, cheering and jeering the racers as they cycle and run inches in front of them. Describing her first trip through the grandstand in what was also her first ever cyclocross race, reporter Grace Kennedy wrote in The Uniter, “As I willed myself not to fall, the worry of the climb melted away and morphed into an adrenaline rush that carried throughout the race, due in part to the infectious energy coming from the crowd cheering and ringing cowbells..

DarkCross also sets out to provide as much fun for the spectators as it does for the riders. The racing action will be complimented with pyrotechnics from Archangel Fireworks as well as a laser light show. Spectators have an opportunity to get in on the competition by participating in a photo contest or vying for a prize that will recognize the best heckle of the evening.

In addition to visual spectacle, the other key element of DarkCross is good music. This year’s musical guest, the critically acclaimed Crooked Brothers, will perform in between races. And during the races, a team of local DJs, featuring the internationally renowned DJ/Producer John Norman (aka DJ Khemlab), will do their best to transform the Speedway into a dance floor.

If the overwhelming response and hundreds in attendance from the first two years is any indication, the third year promises to be a night of unforgettable entertainment. Backed by a solid roster of sponsors, including title sponsor Wallace + Wallace Fences, DarkCross returns to the Red River Co-op Speedway on September 7 to kick off the 2013 Manitoba Cyclocross Season. Gates open at 4 pm with the first race starting at 5:30 pm and the marquee race beginning at 10 pm. There are races for everyone, including those who have never raced a bike before and kids ages 5 and up. Admission for spectators is free. For more information, or to register, visit www.darkcross.ca.

Previous post Sven Nys To Say Goodbye to Colnago and Hello to Trek for 2014?