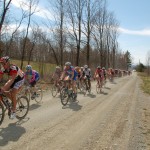 Rocking the dirt section in Battenkill. Photo via flickr by talldoofyirish

You don’t have to look to northern Europe to see true classics conditions. Sure, the world’s top one-day riders lined up in Flanders last weekend and for Paris-Roubaix yesterday, but the day before France’s queen cobbled classic, American amateurs and pros were throwing down in what Battenkill promoters bill as “America’s queen classic.” Just like the race’s brethren across the pond, the 82-mile course featured sectors of pavé – in this case, dirt roads – that favored both equipment and riders with skills suited to cyclocross.

There were plenty of straight-up ‘cross bike mixing it up in the race, with wider road tires, as well as in-line brakes, sealed cables, cantilever brakes and other accouterments more suited to a USGP than a road race. A scan through the top finishers revealed quite a bit of “cross-over” as well. As the Post Star newspaper reported, women’s winner Anna Barensfeld is a cyclocross specialist who put her dirt skills to work to take the Battenkill victory. She raced several stage races in Texas and took a win in a West Virginia road race in her preparation for the longer-duration event, pulling away from second place Silke Wunderwald (Team Kenda) in the final 200 meters. Women’s Collegiate Div 2 2009 national champ Arielle Filiberti (Specialized Women’s Team) rounded out the podium in third.

Heck, looking at that list, cyclocrossers straight-up dominated the top-ten leaderboard in the Elites! Peter Goguen (Minuteman Road Club) is another familiar name racing this past weekend. The 13-14 year-old runner up at Nationals in Bend was able to take the win in the same division in Battenkill.

Congrats to all the ‘crossers putting your skills to good work out there. Next weekend is the Pro-only UCI Invitational race, we’ll be hoping to see more familiar names rocking the leader board.

Full results on the Tour of the Battenkill website.

Next post The Off Season - Moving At A Different Speed

Previous post They Keep It Rolling: A Day With Pedro's