The Off Season – Moving At A Different Speed 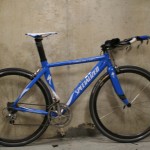 Recently I went through the part of my season about which I’m never quite sure how to feel. I cling to the ‘cross bike as long as I can, reliving the past season with each ride and trainer session. But the time comes each year when I need to move on, at least for a little while. It’s an odd feeling though, moving from one bike that I’ve been so accustomed to riding over the past few months, to another that’s been hanging in the rafters for those same months.

As I borrowed a couple of parts from the ‘cross bike to use on the time trial bike, I couldn’t help but feel a little guilty, like I’m cheating on my true love. And in a way I am, but there are good reasons. As I hung the ‘cross bike by the ceiling hook, I had to keep those reasons firm in the front of my mind to keep my resolve in completing the task at hand.

The way that I cling, literally and figuratively, to the ‘cross bike after the season is my number one reason to move on. I’ve grown used to the position, handling and feel of the bike, and it’s time for a change to keep everything fresh. The position that most of us use on our ‘cross bikes is a compromise between comfort and speed. The position that I’m moving back to is all about speed and gives nothing up for comfort. Getting aero on my time trial bike reminds me which core muscles I’ve neglected over the last few months. It forces me to work and pay attention to muscles that I’ve let atrophy and increase flexibility in the areas I’ve let go.

At the same time, the change from the ‘cross bike to the “other” bike brings with it fresh enthusiasm and excitement. The TT bike is everything that the ‘cross bike is not. Sleek, light, fast. And uncomfortable. But you have to make sacrifices if you’re going to challenge for the mid-pack finish in the local TT that no one else will remember a weekend later. The TT bike means connecting again with cycling friends and relatives (seriously, the first TT of the year has become a family tradition!) that had the good sense to hibernate during the miserable part of the year that is ‘cross season. And the speed of the TT bike is exhilarating; there are few things comparable to moving at 30 mph down a flat stretch of road, although in my case that means a return leg at 6 mph once that tailwind turns on me.

The change in bikes means a change of seasons as the warmer spring temps begin to arrive. If it seems counter-intuitive for a ‘cross racer to be pleased by warm weather, you’re probably right. I realize I risk being expelled from the cult as I bask in the sunshine, but it feels so good after all those races where I hoped it would warm up enough to allow the water in my post-race bottle to melt before I got back to it.

There’s also a hidden reason that I like the change of seasons and bikes – the arrival of spring is firm evidence that we are closer to fall. Because just as the blooming flowers and awakening trees we’re witnessing now signify spring, we know that it’s only a matter of time until the flowers wilt and the leaves fall. And that means another change of seasons and another change of bikes. But the changes then bring everything back into balance, because another ‘cross season has arrived.

It’s at that point that all my reasons for riding through the year are revealed as just a cover story, because no one outside the community would understand that all the time that I spend riding my bike is simply explained. I ride through the good weather so that I can be at my best in the worst conditions, smiling as I ride with the few souls that share the same mindset.

Until fall, ride what you must to get through. Use whatever justifications or mind-tricks you need to keep yourself sane.  But keep riding, because ‘cross season will be here before you realize it.