Quebec’s first-ever UCI cyclocross race takes place October 20 and 21 at Sherbrooke CX. As part of the festivities, Siboire microbrewery will be offering a special beer guest brewed by Tim Johnson. Get the story of how Johnson branched out into brewing and more information on how to register for the race.

Now retired, cyclocross pro Tim Johnson is still heavily involved in cycling. Bike advocacy events, a job at USA Cycling and TV commentating, among other things, haven’t kept him from riding his bike.

Next thing on the list is Tim Johnson, the brewer. And this new chapter began … right after a bike race.

Elite races were barely over at the 2017 Canadian Cyclocross Nationals in Sherbrooke, Quebec, when Tim Johnson and some friends took off for an unruled, unplanned and unofficial race on the waterfronts of Sherbrooke’s Lac des Nations. “That was one of the funniest races I ever took part in,” Johnson said. “Among the riders were longtime buddies Pierre-Olivier Boily and Jonathan Gaudreault, both co-owners of the Siboire microbrewery across the street. We raced pretty hard, pushed each other a bit and laughed a lot.”

The race ended with everyone gathering around a few beers. Tasting the latest brews from everywhere has been one of Johnson’s hobbies for a while. “P-O and Jonathan suggested I brew my own beer for next year’s race in Sherbrooke, which they planned to be UCI-sanctioned after two years hosting Canadian Nationals,” said Johnson. “I accepted right away. The DNA of cyclocross is made from people like these, so this was a no-brainer.” 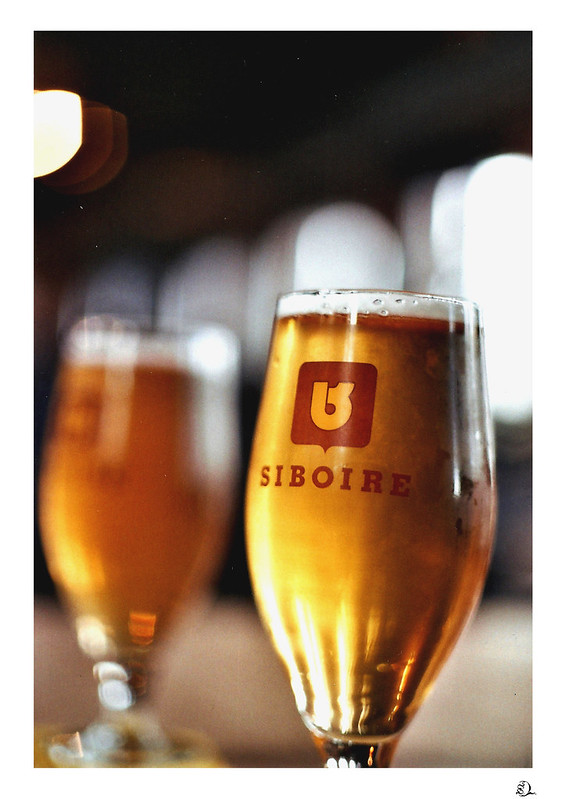 Months went by and Cyclocross Sherbrooke got the UCI C2 sanction for the weekend of October 20-21 2018. [More info on the race and registration]

Tim Johnson soon needed to chose a beer style. “I like to ride to events, parties or simply do beer rides with friends, from a brewery to another. When I get off the bike, nothing’s more refreshing than a New-England IPA. It’s isn’t as watery as a pilsner or as sticky as a stout. So I chose the NE IPA.”

Next stop was at Siboire on October 3 for the brewing itself. “I’ve visited quite a few breweries,” recalls Johnson, “but I’ve never been up on deck with the guys doing the work. We discussed the hops we would use and from then it was hands-on. To see the barley being cooked, plus taking part in stirring and boiling was very interesting… And way tougher than I expected. There is a lot of human passion and care behind those beers.”

Tim Johnson knows a thing or two about beers.

It’s important to hydrate before a race as important as the Legends race – as shown by @timjohnsoncx and Matt Kelly show us here. @trekcxcup #trekcxcup #cyclocross #hydrateordie #legendsrace

The three-time U.S. cyclocross national champion was recently informed by brewmaster Jonathan that fermentation is going well. Johnson probably won’t make it to Sherbrooke in time to taste his own beer on Quebec’s first ever UCI races, but he hopes this brew will send a great taste of New-England cyclocross spirit to Eastern Canada. After all, who else than Tim Johnson and a NEIPA could make this happen?

Asked about how confident he is on the beer’s taste, Tim was clear as a pale ale: “I know Siboire doesn’t pull out bad beer, so it’s gonna be just fine.”

Sherbrooke CX takes place on October 20 and 21 in Sherbrooke, Quebec. You can register for the race at bikereg.com.

Next post Start Lists: 2018 US Open of Cyclocross at Valmont Park in Boulder