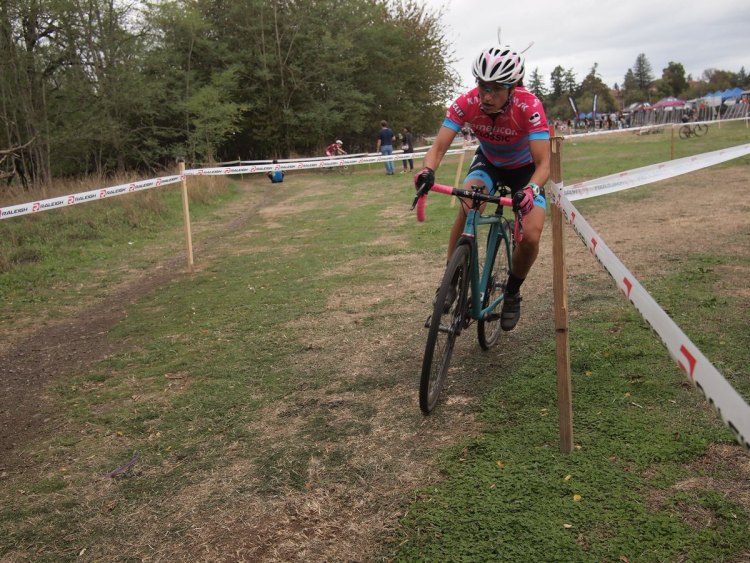 McFadden takes a corner on her way to winning the first MFG race of the season. Photo by Robert Grunau

On Sunday, the MFG Cyclocross series returned to the site of last December’s Waves for Waters UCI event for the second installment of the 2015 series, Lakewood Washington’s Fort. Steilacoom Park, otherwise known as the South Sound Super Prestige. The rains that fell earlier in the week weren’t enough to smooth out the bumpy backfield, nor was it enough to tamp down the dust that would coat bikes and the faces of the racers in every field.

Local big hitters Courtenay McFadden (American Classics/Zones) and Jessica Cutler (Jamis Pro Cyclocross) took control of the women’s race from the word “GO!” and the pair quickly distanced themselves from the 19 women field. McFadden established herself as the race leader and Cutler was able to keep McFadden in sight for several laps, but it was McFadden who would ultimately win the day, finishing a strong fifteen seconds in front of Cutler. Heidi Wood (333 Factory Racing) took the final podium spot, a minute behind Cutler.

On the men’s side of things, Steve Fisher (Raleigh/ FSA CX) would finish in the top spot with a healthy advantage over SET Coaching’s Kevin Bradford-Parish, and Toby Swanson (Ravenna Capital Management). Bradford-Parish was the early animator, working a gap that only Fisher could bridge. The pair would only be together for a short time, Fisher would be all alone by the fourth lap, using fitness he gained during his road season with Jelly Belly. Bradford-Parish and Swanson would, at times battle for second, but Bradford-Parish was the one to find himself on the podium’s second step.

MFG takes a Bi-Week this coming Sunday, but will return on October 3rd, for Brian Tracy Experience, at the infamous Silver Lake course in Everett Washington. Fisher will look to deepen his already substantial points lead in the Men’s race, while Bradford-Parish will hope to keep Fisher within striking distance. 333 Factory CX team rider Hedi Wood will look to gain more distance on her closest series competitors, Cycle U’s Kristen Kelsey and Nemesis Racing’s Andi Zolton. Next post Will the Grinch Trade a Santa Suit for Bermuda Shorts in 2016? Jingle Cross Preparing a World Cup Bid Submission