Christopher Langer, one of our contributors, is on the ground at Eurobike 2014. Stay tuned for upcoming posts, including Stevens’s new cyclocross model as well as looks at the Cube and Centurion. Langer also was able to get a chance to see Ridley’s new offerings, although we already were able to get a comprehensive sneak peek earlier in the year.
As a cyclocross enthusiast, Langer was instantly attracted to some of the show’s ’cross premiers: such as the new lineup by Challenge Tires. 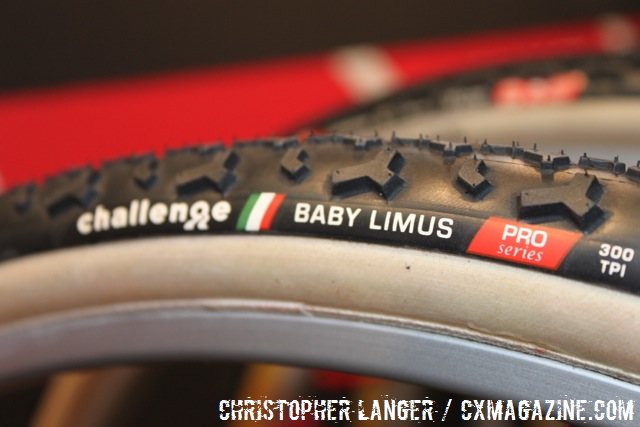 Challenge’s Baby Limus is basically a Limus with 50% lower center knobs, 75% transition knobs and normal sides, what Langer described as a worn Limus. The Baby Limus covers a greater range, for example, half-muddy courses with faster flats or hardpack in between. Close-up on the Baby Limus. You could ride your current Limus tires on a straight road to see this kind of wear, but Challenge did the heavy lifting for you. © Christopher Langer.

Last year saw a tremendous reception of Challenge’s Chicane tires. One possibility for the spike in popularity is an increased demand for one set of tires that can get the job done no matter the conditions. While the traditional Limus tires have been great at handling deep mud, riders disliked the large tread on pavement. The Baby Limus offers an all-around option for people who are not a fan of file treads. The Chicane was hugely popular last year, and will continue to be available in the 320 tpi cotton “Team Edition.” © Christopher Langer

Speaking of Chicanes, Challenge also showed off this season’s upgrade, the Chicane “Team Edition.” The 320 tpi cotton for a much more supple ride is the primary difference between the Team Edition and standard Chicane. The Almanzo is the old Grifo XS, and is now part of the Challenges gravel line  tougher sidewalls and higher protection is the key. © Christopher Langer.

Gravel riders were not ignored at Eurobike. The Almanzo might look like the old Grifo XS, but Challenge kept longer rides in mind when creating the Almanzo, and they beefed up the sidewalls and increased protection all around.
Stay tuned to cxmagazine.com for more Eurobike 2014 action!

Next post Stevens and Focus: The Latest from Eurobike 2014