The Kick Cancer Cyclocross Derby Kicks Off the Weekend in Winnipeg

Today kicks off the Canadian National Championships in Winnipeg, Manitoba, timed a full month ahead of normal to avoid the likelihood of brutal cold winds and deep snow of late November. Tomorrow will host the Manitoba Grand Prix of Cyclocross, which has attracted cyclocross racers outside of Canada, including Ellen Noble as well as Jeremy and Gabby Durrin.

Friday started the weekend with the Kick Cancer Cyclocross Festival, presented by a fund which targets cancer research and aid in Manitoba. Not only did the festivities include fun commuter racing and course previews, but there was also a nighttime open race that got heavy participation from cyclocrossers in Winnipeg who wanted to start their weekend off right.

Media and Celebrity Race of Winnipeg Hybrids with V-Brakes were more of the rule than the exception in the early morning Media and Celebrity race, where the local known faces of Winnipeg came out on their commuters for a throw-down. Rather than a mass start event, the race was turned into a knockout tournament, with each stage being a head-to-head battle over a half-lap of the course. Third place La Course finisher Leah Kirchmann helped Steve Scoles announce the race, and both will be the voices of the live broadcast this weekend. © Andrew Reimann

Voice of Winnipeg cyclocross Steve Scoles and famed Canadian road cyclist Leah Kirchmann announced the early races, which should act as good practice as they will be reporting the big races live over the next two days on the online broadcast.

Kirchmann, who earned the third spot on the podium of the inaugural La Course in France this year, admitted to Cyclocross Magazine that she was able to get in a few local cyclocross races in each season, although she will take this year off after breaking her collarbone at Worlds in the team time trial. Everyone who raced was a winner this morning as Half Pints Brewing Company awarded everyone with their cyclocross-branded Dead Ringer IPA. © Andrew Reimann

All participants received a bottle of beer from Half-Pint Brewing Company, a local Winnipeg brewery that created a special craft IPA called “Dead Ringer” specifically for Nationals (the dead ringer referring to the spectators with the non-stop cowbells. 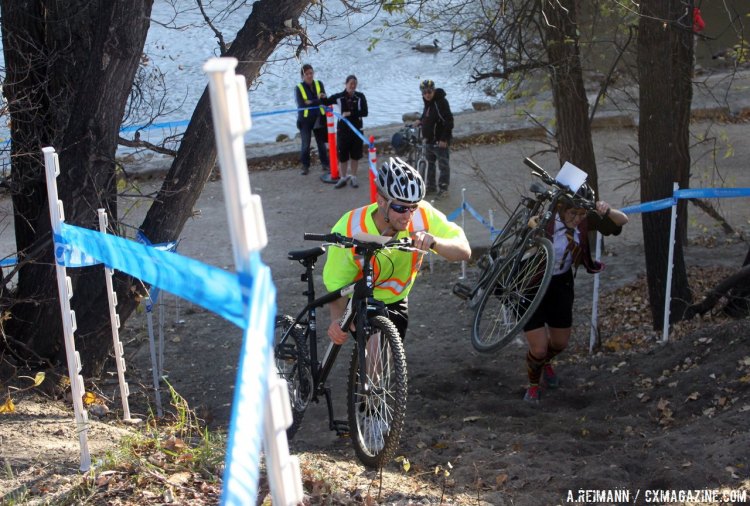 The festivities continued later in the day with the University and Cooperate races, which saw teams use the entire course in a relay-style race. All walks of life from Winnipeg showed up to compete, from the elite racers found working in Woodcock Cycle Works to those who just wanted to dress up in costume garb and try out the course that the elite riders would be racing on over the next few days. Winnipeg’s police force also has a team to be reckoned with, finishing fourth on the day. © Andrew Reimann

After a break in the action, the next race waited until after nightfall to begin and sported the largest field of riders on the day. Riders made their way around a pitch dark course, with dim park lights and distant city buildings guiding the way. Racers dressed as lumberjacks and robots descended on to the course, and although cyclocross bikes were the main choice of the field, there were still a few hybrids and even a folding bike that attempted the rough descents and sand sections of the course. The last race of the day had riders literally traversing through the dark, with park lights and the cityscape to guide them. © Andrew Reimann

Monte Dirks, arriving in Winnipeg from Minnesota, showed how to win at night, storming the field for a huge solo victory.

“Absolutely beautiful night to night,” Dirks told Cyclocross Magazine after the race. “The course was tough to see. There were plenty of trees in the course, and sometimes you just had to make a guess of it, but still lots of fun… Super awesome course, lots of ups and downs.” Monte Dirks, shown on the right, came from Minnesota to take the win in the largest race of the day. © Andrew Reimann

Previous post SSCXWC 2014: How Did We Get Here? A SSCXWC History in Pictures