In the snowiest SSCXWC (and arguably snowiest ’cross race of the season), 100 men and 43 women duked it out in increasingly crazy weather conditions to find out who would take the title—and the tattoo—in Philadelphia this year. It might be snowing in Bend, Oregon, at the Deschutes Brewery Cup, but the conditions may have been even worse here as snow started dumping on the course when the first wave—the new Everyone Is A Winner race—took off, and by the women’s race, the course was four inches deep in packing snow that chunked up into cleats as it knocked riders off bikes and created tough conditions for everyone—especially since racers obviously only had one gear to choose from on the already tough up-and-down course. 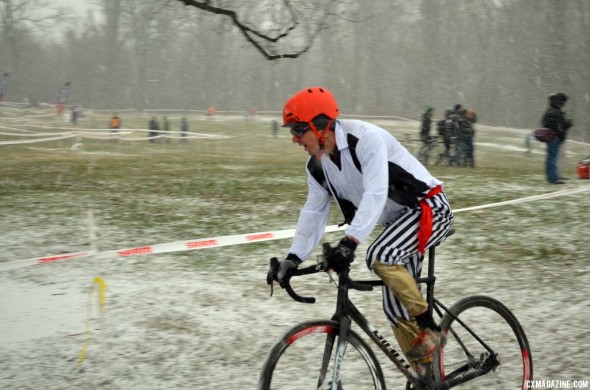 Adam Craig, calm in the lead, at SSCXWC 2013. © Cyclocross Magazine

In the men’s race, frontrunner Adam Craig took an early lead and didn’t look back. He had initially planned to race in a more risque costume, but as the snow picked up, the denim crop top was traded for a pirate costume, but he took to the line in style. The Braveheart-esque start allowed him to go wide to the right as the line of 100 men across the top of the hill spilled over, then curved around a tree and onto the course, back up the hill.

Cole Oberman was Craig’s only challenger for the title after one lap, and while the rest of the riders put in a valiant effort, by the last lap when Craig should have sailed in for victory, he asked Oberman to go one more lap, “mano-a-mano” like the scene from Rad (the cult-classic 90s BMX movie). He and Oberman went out for a final lap together, and while Craig took the win, Oberman was still jubilant, carrying his bike above his head across the line. Canada’s Peter Glassford came in, looking stylish in jeans and hoodie, for a hard-fought third place. In the women’s race, Vicki Barclay, a racer for Stan’s NoTubes, one of the sponsors of the race, took an early lead and never looked back. A good start and a lot of crashes toward the front as racers hit the first turn ensured Barclay’s early lead as race favorite Nikki Thiemann was caught in traffic. San Francisco’s Ellen Shirrell wanted the title as well, and moved her way through the field and into second place. However, the effort cost her and she was never able to reel in Barclay. “I guess I’m getting the tattoo!” she laughed at the finish line—a surprise to her as well, since the day before, she had confided in CXM that she was hoping not to win so she could avoid the ordeal. But in a brilliant display of showmanship—and perhaps some help from her Batgirl costume—she stepped up to the plate and headed to the tattoo parlor with Adam Craig post-race to get her first tattoo, while Craig headed in for his second SSCXWC ink in as many years.

Next post Bilenky Junkyard Cross in Photos: A Gallery