Like Boyd Cycling, Cinelli is a bike company that was founded by a former bike racer. However, whereas Boyd is relatively new, Cinelli dates back to 1948, when it was incorporated by its namesake Italian Cino Cinelli. The Milan-based company has come a long way since then, and despite many Cinelli owners over the years riding their steel steeds on dirt and gravel, over the last handful of years it has a dedicated cyclocross and gravel option in the form of the aluminum Zydeco.

It has been a while since we have been able to take a good look at the Cinelli Zydeco. Back in Issue 10, we reviewed the Zydeco and found that we really liked the quick handling but felt the bottom bracket could be a bit lower and the canti brake fork less chattery. Today we take a look at the 2017 Cinelli Zydeco we saw at 2017 Press Camp to see how it has changed since we last saw the Italian off-road model.

A New Look at the Cinelli Zydeco

A lot has changed with Zydeco since the early aughts when we last looked at it. Cinelli has added disc brakes and a new carbon disc fork to modernize the design. The geometry has been changed, with an increase in the bottom bracket drop from 58mm to 65mm and extra tire clearance up to 42mm, via a slight increase in the chainstay length, pushing the rear wheel back 0.5cm to 43cm. The frame of the new Zydeco is built from Columbus Zonal aluminum and is listed at 1530g for a medium, and the carbon disc fork with an alloy steerer weighs 590g. The frameset is listed at a retail price of $825.

Perhaps the bigger story is the complete bike in terms of value. It’s built with a FSA Omega 50/34 crankset and Shimano Tiagra derailleurs and shifters. The disc brakes are dual-piston TRP Spyre mechanical disc brakes with 160mm rotors. The wheels are Cinelli-branded Alex wheels with a Shimano Deore hub, and the bike comes with 40mm Kenda Flintridge gravel tires. The company is clearly trying to bring the Italian brand and heritage into lower price points for a cyclocross or gravel setup. However, we did note the Zydeco uses quick release axles in both the front and rear and the disc brake mounts are post-mount in the front and IS in the rear. Quick releases and IS mounts are not the latest cyclocross technology, but they are still both popular with metal frame builders and won’t unintentionally slow you down.

End of a SSCX Collaboration Era

For about the past decade, Cinelli has collaborated with Mash, located in San Francisco, on a number of singlespeed models. In recent years, one of those collaborations was a singlespeed cyclocross bike called the Cinelli MASH SSCX. 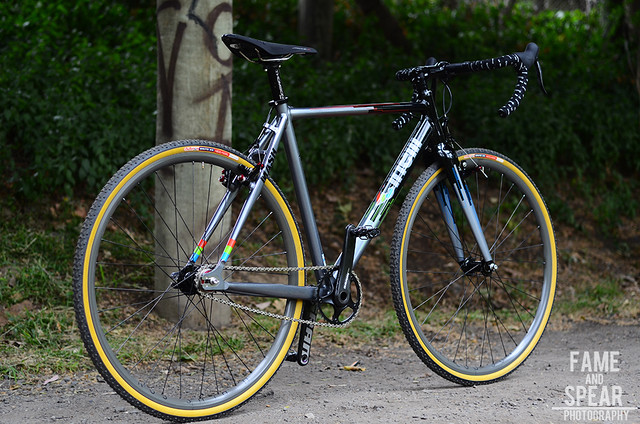 Cinelli and Mash collaborated on the Cinelli MASH SSCX project but the SSCX option is no longer offered. (photo: flickr via Andy Rogers)

Although Cinelli and Mash have collaborated on a number of singlespeed models still on the market, the collaboration on the SSCX bike has ended.

Finding Cinelli in the U.S.

The sole distributor of Cinelli in the U.S. is currently Cyclone Bicycle Supply of Portland, OR and New York as of last December. The Cinelli brand can be purchased through bike shops and online retailers that partner with Cyclone. Cyclone is quick to point out the besides Cinelli track frames, it’s working to ensure that local bike shops are where Cinelli framesets and bikes are purchased.

If you are interested in the Cinelli Zydeco, check to see which version it is and don’t rely on the paint scheme. Cyclone’s website advertises the 2017 version with the lower bottom bracket, but some retailers are still selling an older model with the same paint scheme but with the steeper, shorter geometry.