With one to go, Trebon led throught the finish, up the two staircases, and across the pavement bridge, standing out of the saddle in attempt to drop Al, but it was in vain. The two entered the woods for the final lap, and Al knew what he had to do. With an attack in the twisty wooded track, he got a bit of daylight, and it’d be all he need. Trebon was done.

“I caught Thijs and he was pretty done, but so was I,” Trebon recalled. “I put on a little effort in, he kind a responded to it and then I was just having such a hard time holding on, my arms were just so tired.

“[Thijs] started going [on the last lap] and once you get over your limit, it’s so hard to turn and I had to kinda sit up, I had nothing left,” Trebon admitted. “It’s hard. It’s hot…it was rough. That was one of the roughest tracks. It’s just so fast, it’s just bump bump bump all around. Some days are just rough on the body. Sometimes someone has just a little bit more.” The crowd awaited a sprint finish between the two, but to everyone’s surprise, Al rolled through the last corner, on to the finishing straight, with a big smile. Maybe racing high-level cyclocross with a full-time job really isn’t so hard after all, as Ellen van Loy demonstrated earlier in the day. Twenty two seconds later, an exhausted Trebon rolled down the paved straight, high-fiving the crowd. Behind, Chainel capped off his comeback ride with a big smile, raising his arm in symbolic victory over his earlier misfortune. Forty-year-old Milan Barenyi from Slovakia had a solid ride, wrapping up the top five.

Chainel’s ride wasn’t the only display of fortitude and grit in the race. Carl Decker missed his connection between Shanghai and Beijing, and as a result, lost his two Giant TCX Advanced bikes and all his street and cycling clothing minus his cycling shoes and a Giant t-shirt. We called Decker more than a dark horse in our race preview, but hadn’t quite factored in the adversity he’d face in getting to the start line.

“In a group, somebody’s always gonna get screwed so it’s my turn,” Decker rationalized. The Bend, Oregon-based mountain bike and rally car racer is no stranger to cyclocross, but rode a lot of gear that was strange to him on Saturday. He squeezed into spare bib shorts from Molly Cameron, and borrowed a helmet, bike (clincher-equipped Ridley) and cleats from Cameron’s mechanic and photographer. Decker even did a quick bottom bracket overhaul on the borrowed bike before the race. “It took me 48 hours to get here, none of my stuff made it here though so I’ve had to borrow everything from bikes to underwear. Yes, I’m wearing Ryan’s underwear…but not during the race [laughs],” Decker explains.

Decker didn’t have the luxury of pre-riding the course the day before, but the world-class bike handler and Downieville Classic winner put all those skills to good use. After a relatively slow start, he took a few laps to learn the course, and then proceeded to move through the field, passing McDonald and then Lindine. Leaning further into corners than anyone else, Decker was finding some free speed out on the course, and other than getting passed by a determined Chainel, Decker only passed riders in the second half the race, eventually climbing all the way to fifth.

Did the travel and equipment problems keep Decker from a win? “I think my bike is a lot better than this one,” he said. “It took a while to get used to, not only the course but the bike. Maybe that could have been worth a spot or two. I was learning the course as I went, by the end I was figuring it out, riding pretty fast. I like this kind of track, anybody can ride it but to ride it fast, you end up taking weird lines, wheelieing through stuff, smoothing out the bumps.”

Decker, after what many of you agree is an impressive ride, was satisfied he made the trip to China, but even the morning of the race, was a bit regretful in his choice, admitting, “Yesterday things looked pretty bad, not having my stuff.” After cutting his face while shaving with a disposable hotel razor in the morning, he was thinking “I wish I was home.” But after a good race despite the adversity, Decker believes that he’ll “look up on this day in hindsight and think it was super fun.”

Also competing for Ride of the Day (ROTD) award was Sebastien Cadieux-Duval. In his first cyclocross race outside of Quebec (and first UCI race), the 24-year-old Canadian started dead last, with bib 61. At the finish? He was tenth. Keep your eye on that racer if he chooses to pursue more cyclocross. “Maybe I’ll have to race some in the States,” Duval told Cyclocross Magazine.

Redline’s Justin Lindine overcame a slow start to close in on a top-five finish before being passed by Decker on the last lap. The two had raced each other on mountain bikes in Breckenridge, with Lindine coming out on top, but he was satisfied with his finish in Beijing. “Not a bad day to have a trip to China, be able to race bike, and get paid a little bit, so it was fun,” Lindine said, despite being hopeful of matching last year’s third place. Justin Lindine missed repeating his third from last year, but was satisified with a sixth place in the 2014 C1 event. © Cyclocross Magazine

Thijs Al, like Ellen van Loy, raced a SRAM CX1-equipped Ridley to victory, only his was an older model blacked out since he is no longer sponsored by the Belgian brand. Trebon and McDonald also ran CX1, while Lindine raced Ultegra 6770 Di2 but will be switching to SRAM CX1 this season.

The president of the event sponsor, Qiansen, promised before the day’s race that any three-time winner of his cyclocross race would receive a permanent bronze statue of him or herself in the cycling park. After Kloppenburg did not defend earlier in the day, Al will have the unique opportunity next year, should he come back out of retirement again.

Earlier in the day there was an amateur cyclocross race, which sold out at 100 riders. In 2013, the promoter only had 60 riders. Sixty six percent growth year-over-year is pretty good in most books.

China’s top rider, Shangguo Yuan finished 25th, showing China’ cyclocross talent is on the rise. Yuan finished ahead of seven Americans. Could this signal that the promoter’s efforts to grow the sport in China are working? Perhaps this also may means there will be less incentive (and money used) to invite so many international racers just to fill out the field. 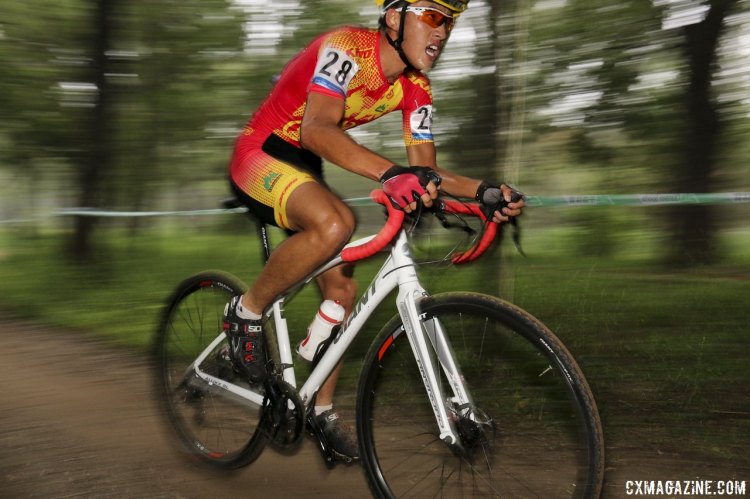 China’s YuanXuan Ma was just one of four racers to show they could be competitive in international cyclocross. Ma finished on the lead lap. © Cyclocross Magazine

Full results below the photo gallery. Stay tuned for more images, videos, and updates on American and other riders’ performances.

Christine Vardaros, after racing to ninth earlier in the day and getting stung by a wasp, contributed to this report.