VERONA, WISCONSIN— As the women lined up today to contest the 2013 national title, slow to remove their outer layers in the frigid 19 degree temperatures, worry lines crossing the face of many who were uncertain about the frozen ruts, the sections of ice, the mud solidified into softball-size rocks, Katie Compton (Trek Cyclocross Collective) calmly waited in line for the restroom, hugging racers and wishing them good luck. She’s been here before, after all, and though the big question remained how the conditions would affect the race, halfway through the lap there was little doubt of the outcome: Katie [Middle initial ‘F’] was again crowned queen of American cyclocross. A surprise second came from  Jade Wilcoxson (Optum Pro Cycling), with Nicole Duke taking third just behind. Georgia Gould (Luna) and Crystal Anthony (Cyclocrossworld) rounded out the podium. [See the full results of the Elite Women’s race at the 2013 Cyclocross National Championships here or on page 4 of this report] The Setting, The Stakes, The Start

The sun had been bringing a welcome warmth to those who had raced and spectated in the morning’s collegiate races, and with it the once-frozen ground gained a sheen that would prove a complicated mixture for the racers to deal with: bikes came through caked with mud, but most of the ruts were still solid as cement, making choosing lines and pressure a difficult affair.

Compton, of course, was the overall favorite – something that comes with having eight national titles and a so-fresh-it-hasn’t-been-worn overall World Cup champion’s jersey. But with a course so treacherous that no less than Steven Tilford warned it might be unraceable, and Compton having missed out with crashes in the past, there were plenty of hungry racers ready to pounce if the defending champion made a misstep.

Because this year, with Worlds at home in Louisville, Kentucky, there wasn’t just a national title on the line: four slots still remained undecided for the Worlds team, with two locked down to Compton and Kaitlin Antonneau (Cannondale p/b CyclocrossWorld) due to their World Cup placings, and a strong showing today just might be what gets a lucky racer on the docket. Looking the meanest as the women pulled up to the start line were Meredith Miller (Cal Giant-Specialized) and Nicole Duke (Alchemy). Both women had difficult early seasons, with Miller breaking her hand at Providence and Duke uncertain of her future after falling out with Raleigh-Clement and starting with a new team late in the season. 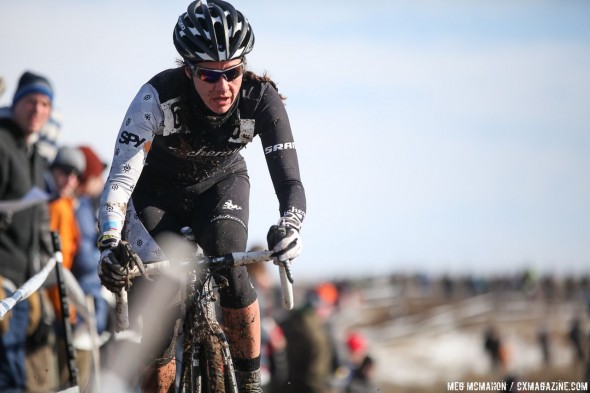