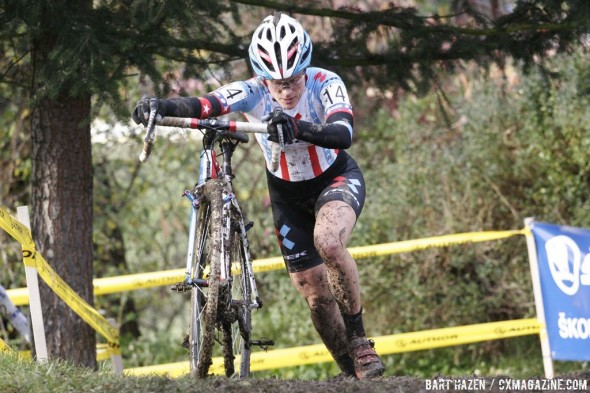 American Katie Compton on her way to the win © Bart Hazen

In the Junior men’s race, American Logan Owen (Redline) took an impressive third place behind winner Mathieu van Der Poel, who dominated the race pole to pole. Belgian Quinten Hermans, who took second, did his best to follow, but could not keep the wheel of the world champion. This is Owen’s second top five placement in as many races, and van Der Poel’s second win. Zach McDonald (Rapha-Focus) also had a strong race, taking 13th in the U23 category behind Belgium’s Wietse Bosmans. Michael Vanthourenhout took the hole shot and the early lead, but in the second lap, Bosmans took over and slowly extended his lead for the duration of the race. Even a crash after trying to jump over the barriers didnt hurt him. World cup leader Mike Teunissen suffered a mechanical at the start, but still managed to chase from last position to finish sixth on the day.

In the men’s race, American Jeremy Powers (Rapha-Focus) took a hard dive in the first corner, hitting pavement and being slow to get back on his bike as the field continued on. With the slippery, technically challenging conditions, the race at the front quickly separated, with Sven Nys  (Landbouwkrediet) and Niels Albert (BKCP-Powerplus) proving the most adept at handling the conditions. By the second lap, the two rivals had created daylight between themselves and chasers Kevin Pauwels (Sunweb-Revor), Tom Meeusen (Telenet-Fidea), and Klaas Vantornout (Sunweb-Revor) pursuing behind. For a moment, it looked as if the duo would spend the race attacking and covering each other. However, even the best can falter, and today Sven Nys continued his World Cup bad luck as he took a spill on a slippery descent, knocking his front wheel out of alignment. As Nys fell back a handful of places, Albert was left alone to fly. The world champion rode a clean race, cautiously expanding his lead and taking his first World Cup win of the season.

Behind him, Klaas Vantornout took a commanding second place finish, using his long legs to distance himself from teammate Kevin Pauwels on the 27 stair-steps heading into the finishing corners. The two had spent much of the race trading positions, with Pauwels looking stronger earlier on, but eventually fading in light of a course that clearly favored the runners. However, knowing that Pauwels has a better stake in the overall standings, Vantornout soft-pedaled the finish, looking behind him, in the hopes that Pauwels could catch back on and take silver. An impressive ride by Rob Peeters (Telenet-Fidea), however, forced Vantornout over the line as Peeters and Pauwels sprinted for third, with Peeters coming out on top. The effort was for naught, however, as Peeters was disqualified for riding through the pit without dismounting, thus moving Pauwels into third. Tom Meeusen took fourth, with Bart Wellens and then Sven Nys following behind.

The third place finish would have been one of Peeters’ best placements, and the Telenet-Fidea rider was less than pleased with his disqualification. “I definitely did a stop-and-go. I was very good today. I was going to stand on the podium,” he said.

After recovering from his crash, Jeremy Powers set about to make the best of his disappointing start, but instead suffered a race-ending mechanical. “I got something in my cogs…which snapped my hanger off with two laps to go right at the start/finish,” Powers said on his Facebook page. “I hate dropping out of races, an event like today’s race for me and the team takes a lot of time and energy…not to mention money. So it’s a raw deal. It’s not a pity party though, I’m alive and well…just need a couple days to get back to the States and get my rhythm going again!”