Kupfernagel on Schedule for Fast Start to the Season 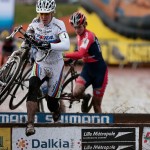 Last year, Hanka Kupfernagel took second to Marianne Vos at the World Cyclocross Championships in Tabor. Cyclocross Magazine Correspondent Christine Vardaros checks in to see how Hanka has prepared to do one better this season.

Race-ready and motivated to start, German Hanka Kupfernagel (Stevens Racing Team) is on target to enjoy a stellar cyclocross season. After a solid “off-season” preparation, the four-time World Champion plans to kick off with the first World Cup on October 17th in Aigle, Switzerland.

For many cross specialists, “off-season” means relaxation, long lazy rides, barbeques, and eventually intervals and some late season road or mountain bike races for fine tuning. But for Kupfernagel it means a full season of road racing that began in April. Considering her version of an “off-season,” it’s incredible that she can be motivated for cross racing. But she assures CXM, “I feel great, much better than last year and excited to start.”

During the road season, her successes included a time-trial stage win, podium appearances, and scoring the Sprint Jersey and Most Aggressive Rider Award at the Thuringen Rundfahrt Road Race. A few weeks ago, she also won the Albstadt Bundesliga Tour.

When she wasn’t racing, she kept busy with incredibly challenging training rides such as the Transalp “Hobby” Race. “I rode up so many mountains like never before that week! It was a good experience for me. Most of the time it was very hard and exhausting but with wonderful views, roads and downhills which were sometimes crazy!”

When not on the bike, Kupfernagel and her partner have been working on their new house in the Black Forest. “We finally moved last March. I love it there but that makes it difficult to leave for all the races.” I suspect it wasn’t that hard to leave the house for her recent photo shoot for Cycle Passion Calendar – especially after I previewed the gorgeous photos. It was her second time shooting for it. As for the experience, Kupfernagel says, “It was an interesting, funny day, and again good to work with Daniel Geiger the photographer.”

Moving forward, her goals for cross are to land on the podium as many times as possible in the World Cups, the European Championships and to go one better than in last year’s World Championships in Tabor. Her aspirations may appear lofty but if you consider that she placed second at last year’s Worlds with a poor off-season preparation, there is no telling how high she will soar in the coming months.

For the Belgian races like GVA Trofee, Kupfernagel is a bit weary to attend the full collection of events. “I’d like to do these races but it’s a long way to go to Belgium, so it depends on the contracts. Money is not everything, I have to be careful I don’t spend too much time sitting in the car instead of on the bike – but more financial support would definitely be welcome.” While the top men are demanding up to €8,000 per event, the women are lucky to get a few hundred euros, if anything.

As for retirement, this long time competitor has no designs to hang up the bike – most of the time. Kupfernagel explains, “Every time when it’s cold, windy and rainy and no one there for a training ride I think about it. But all the other days I’m still having fun and enjoying the challenge! When I no longer enjoy it…then it’s time to stop.”

Want to ride with Hanka? She is hosting a road training camp in Granada, just south of the Sierra Nevada Mountains on October 24-31. There are still a few spots available if you can get away. http://www.groupsolutions.de/picture/upload/file/Rennrad%20Woche%20Playa%20Granada%20Flyer%20NEU%2020_07_.pdf 2019 European Nationals Run-Down: Who to Watch, How to Watch (For Some)