Wicks and Dallaire Dominate at Bloomingcross 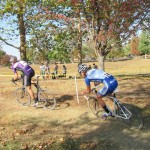 Wicks' power proved too much for Ryan Knapp. © Ren-Jay Shei

While all eyes may be on the upcoming Loiusville USGP, some big racers stretched their legs this past weekend at Bloomingcross, the 6th event in the ZIPP OVCX Tour presented by Papa John’s. Read on to find how the event unfolded.

Bloomington, IN — Barry Wicks and Nikki Dallaire both brought their ‘A’ games to ensure that Bloomingcross, the 6th stop of the oh-so-popular ZIPP OVCX Tour presented by Papa John’s, was more than a sandwich filler! Held on October 17th, the weekend between the UCI3 weekend in Cincinnati and the USGP in Louisville, the Bloomingcross event in Bloomington, Indiana always had the potential as a rest weekend for the Midwest cyclocross community. However, a new, very roadie-friendly course (just one set of barriers and a few technical turns) meant over 225 riders came out to race, no doubt motivated by continuingly unseasonable temperatures in the 80s.

Barry Wicks (Kona) had hosted a skills clinic for developing riders on the previous day and was determined to also take the best of the Midwest Elite racers to school in the Men’s race. Mitchell Kersting (Bobs Red Mill) took the hole-shot and for the first ten minutes kept a solid pace that only Wicks, Ryan Knapp (Bikereg.com) and Mike Sherer (Pony Shop) could follow. That was plenty of time following for Wicks, who put in a big move onto a portion of ‘corsa bianca’ that only Knapp could follow. Sherer turned himself inside out to get back in contention but Wicks continued to turn the screws to take himself solo for the remaining 30 minutes. Knapp and Sherer battled back-and-forth until Knapp took a minor fall, allowing Sherer to definitively get away for an ultimate second place. Kersting changed bikes a couple of times but still managed fourth, followed home by his Bobs Red Mill teammate Rob Kendall. On the podium, Wicks confirmed he’d had a fun weekend and that the race was great training for bigger challenges to follow. All of the top four will be looking for at least top 15 finishes next weekend in Louisville.

The Elite Women’s race was a one lady affair as Nikki Dallaire (Alderfer Bergen) immediately took to the front and was never headed, piling on the pressure to win by a couple of minutes by the race’s conclusion. Nicole Borem (DRT Consulting) was also alone in second place whilst the most competitive battle was for 3rd where Bridget Donovan and Amanda Virostko traded pulls until the former pulled away in the final 10 minutes.

Mike McShane (Bobs Red Mill) put a subpar UCI3 weekend in Cincinnati behind him to win the Elite masters race after a race-long battle ahead of event organizer Andy Messer (DRT Consulting) and teammate Tomasz Golas. The Zipp OVCX Tour presented by Papa John’s continues to be a wildly successful series and the Bloomingcross looks to be a fixture for years to come. Now please, can we get a little rain?