A blur was all the Junior Women 13-14 field saw of Katie Clouse after the whistle blew. © Brian Nelson

Austin, TX- In the 13-14 girl’s race, Katie Clouse (Canyon Bicycles – Specialized) showed off unparalleled skills on the slick layer of mud left by the morning rain. Clouse was able to clear sections of course unrideable to most racers, and with enough speed that she earned a forty-second lead after just one lap.

Tea Wright (Boulder Junior Cycling) continued the success of the Boulder juniors squad, battling for second spot with Gabrielle Lehnert (Hutch’s/Specialized/Slocom/Co-Motion). Wright pulled away from Lehnert in the final lap. “I got ahead on one of the curvy sections,” said Wright, a solid technical rider trained by Pete Webber, of her tactics. Katie Clouse (Cannondale Bicycles-Shimano) was the pre-race favorite, and did not disappoint. © Brian Nelson

“I knew I had a good chance of taking the win again, but I knew I had competition. There are so many great girls out there,” said Clouse after claiming victory. Wright retained second, and Lehnert rolled in third.

We caught up with winner Clouse and second-place finisher Wright: 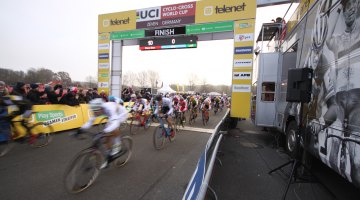