At Day 2 of the USGP Mercer Cup in New Jersey, the typical men’s team tactics of Kona and Cannondale-CyclocrossWorld was replaced by the one-two punch of the Todd Wells and Troy Wells duo. Although riding on separate teams, Todd (GT) and Troy (Clif Bar) defeated the two usually-dominant ‘cross teams with some brotherly love.

With series leader Tim Johnson (Cannondale-CyclocrossWorld) watching from the sidelines, the leader’s jersey was up for grabs. Johnson injured his knee while racing to victory the day before, and could only exercise his forearms ringing a cowbell to cheer on his teammates Jeremy Powers and Jamey Driscoll.

Yesterday’s sloppy conditions remained, but without any rain, the mud proved to be thick and sticky, making running an essential skill for the day. Todd Wells, Jeremy Powers, and previous points leader Jesse Anthony (Jamis) got a fast start, but the conditions did not lend themselves to group racing, and soon Anthony couldn’t keep the pace. Wells, known as a mud specialist, battled with Powers up front, as his younger brother Troy made his way up through “the field,” although there wasn’t much of one as riders were split apart, riding alone and trying to find the quickest lines. 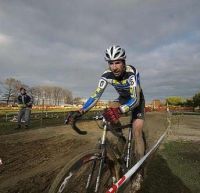 Once Troy reached the two leaders, the younger Wells brother wasted no time in moving to the front, and quickly gapped the former leaders. After Powers couldn’t close the gap, Todd bridged to his brother, and a two-man team time trial was underway, and the two extended their lead to Powers to over 40 seconds.

Entering the last lap, heading into a running section, Todd applied the pressure, and Troy was slow to respond but wouldn’t give up. Chasing the entire lap, Troy gained back time, but ran out of course, finishing seconds behind his brother but happy with the family’s 1-2.

In the women’s race, it was a familiar scene at the front of the race, with the Luna teammates of Georgia Gould and Katerina Nash running away with the race again. Just like yesterday, Georgia Gould used a late lap surge to distance herself from Nash to take the victory and secure her hold on the leader’s jersey. Behind, the big battle of the race was for third, with Rache Lloyd (Cal Giant) powering away from Wendy Simms (Kona) and Maureen Bruno-Roy (MM Racing – Seven Cycles) on the last lap to take third.

In a new variation to the common practice of putting dollar bills in beer bottles or cans for racers to try to grab while riding by, spectators stuck bills directly into the mud in a running section. Racers not in a rush had an easy way to earn back gas money. Next post NACT Trophy Up for Grabs This Weekend