Ohio Day 3…Finally a C1 – A Column by Ben Popper

So this is it. A UCI C1 Race. We newbies tend to think that giving points 15 deep makes it easier to get them. Little did we know, what the C1 really does is attract sneaky riders who haven’t been battling it out in the heat for two days already and guys who’ve been holding back all weekend wanting the bigger payout. I never thought this would be a cake walk or a rose garden. Yet I certainly didn’t expect the C1 mixed with the heat would bring such carnage. Yeah, I thought I had a chance. I guess we all do, that’s why we line up, even though we know the likelihood of Powers seeing our backside is right up there with network television bringing the Muppets back to primetime.

Now I could write the race report like the last two and at the end we would all feel bummed. Or I can make a change of pace. So, I will cut to the thick of it. I had a great start, everything went right and I was positioned in a group that spanned 16th to 25th or so. Exactly where I wanted to be. But then I started seeing guys who were supposed to be in front of me in the race sitting on the other side of the tape. The heat was forcing riders out. With four laps to go, as guys were imploding all over the course, I followed suit and my body shut down. I slipped back as riders flew around me and got pulled. 32nd out of over 60 racers. But, not all was lost as the first five or six of those laps absolutely ruled.

The start…everything finally went right and it made such a big difference. Instead of riding out of my mind for the first three or four minutes trying to make up ground, I already had a good spot. I was in the right gear, I hit my pedals hard and there were not any bobbles in front of me. I was able to slingshot my way from the fourth row into the top 20 or so riders. Riding those first few corners shoulder to shoulder is such a rush, and for just a short while you are actually racing right there with the best.

I love racing through sand. It is one of the few parts of a ‘cross course that requires attention and skill along with power. And it was not far into the lap that we had to ride through the sand pit for the first of two times on the lap. The first time was uphill and it made for a technical obstacle. We had to come out of a tight left hander that was on a two or three foot uphill bump. Then there was about 100 feet of straight away that ground uphill ever so slightly. We had to stay on the pedals, keeping as much speed into the sand if there was any hope of clearing it. I was consistently able to catch riders and close gaps through the sand in this direction. Every time I made it through clean I’d ride away smiling.

Going downhill though the sand pit was unlike any other time I have ever ridden sand. It was so fast, so clean and so much fun. The course brought us downhill through a right hand curve and over a bike path before having a straight shot into the sand. There was a little gap from the grass to the pavement that I’d bunnyhop and then pump onto the pavement for an added burst of speed. Then I just held on for the ride as I would fly through the sand, sometimes passing riders in the process. That was by far the best part of the course for me.

It was a great weekend. Something strange has started to happen as people started recognizing my name from reading this very journal. Thank you to everyone who stopped to say hi to us, wished us luck and shouted for me on the course.

Truth be told, that one UCI point is starting to slip from my grasp, but that doesn’t mean I am going to stop trying and it definitely is not the only reason I am racing. These races are against some of the best racers in the country and that makes them difficult, but I really don’t want to be racing anyone else. These are the most fun races I have ever done. I go as fast as I can, for as long as I can, and have a blast doing it. I am honestly pretty happy with the finishes I have taken so far this year. I am not struggling off the back, but there is definitely room for improvement. Thanks for reading.

CXM Columnist Ben Popper is on a mission to achieve one goal – earning just one UCI point. Follow Ben on this journey this season through his regular journal. His journey took him to Michigan, and then Vegas and Wisconsin, and the Cincinnati International Cyclocross Festival. Follow the whole weekend with his Ohio Day 2 report and Ohio Day 1 report. 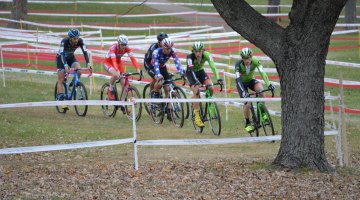