The Turner Bikes Cyclosys is not a new model, having been in the company’s line-up since 2015 and spied as far back as 2011, but it’s Turner’s only hardtail and only drop bar model and it certainly turned some heads at the Sea Otter Classic expo.

Turner had three versions of the Cyclosys on hand in three eye-catching color schemes. The Wine base coat with Glacier accents was launched a few months ago and is certainly current given recent color trends seen at Sea Otter. This finish joins the existing Matte Black and Raw Metal finish options. The raw metal finish is cheaper to produce and Turner passes that savings on to the customer to the tune of a $100 price drop. The Wine and Glacier finish is available on the Turner Cyclosys for $2,647 but the Knight carbon hoops is a $1,400 upgrade. 2017 Sea Otter Classic. © G. Kato / Cyclocross Magazine

Turner has been offering bikes under its own brand since 1996 but has been known for suspended mountain bikes, not cyclocross or gravel bikes. However, Turner Bike’s involvement with cyclocross starts right at the top. Dave Turner himself is a cyclocross racer as is his wife, Christina. With such a heavy background in building some of the most popular and winningest full suspension mountain bikes, it stands to reason that the gravel oriented model would be able to fit some seriously big rubber. On hand at the Sea Otter was a custom Cyclosys in yellow paint that was fitted with 650b tires in 47c width. The Terrene Elwood tires still left plenty of clearance at the fork up front and between the stays out back. Lastly, there was a completely custom painted Cyclosys being built up for Road Bike Action Editor-in-Chief Zap Espinoza with a day glo yellow and hot pink tiger-striped theme. This Turner was a head-turner, and brought back memories of eye-searing Kleins without the tiger stripes: 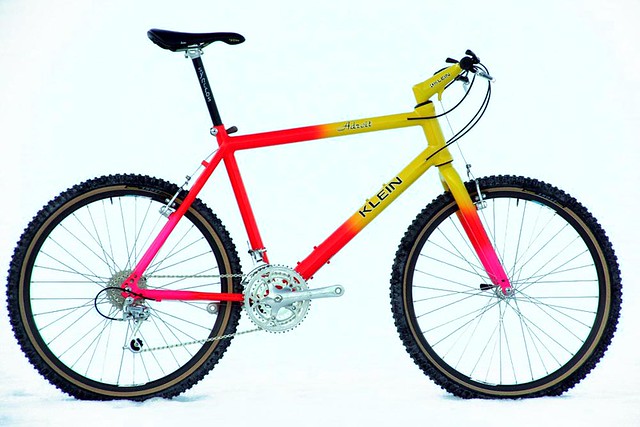 The frame of the Cyclosys is 6061 T6 aluminum with custom butted and custom shaped tubing. The bike will fit 700x43c tires, has internal cable routing and has a PF30 bottom bracket. The rear axle spacing is 142×12 thru-axle and the standard fork is a carbon TRP model with 15mm thru axle and is available in disc-brake only. The Cyclosys is made from 6061 T6 aluminum and has smooth welds and internal cable routing. 2017 Sea Otter Classic. © G. Kato / Cyclocross Magazine

Next post Suspension in Cyclocross: Fiction or Future? - A Race Report by Craig Richey