Sven and Katie Slide On To Podium at Penultimate OVCX Event DAYTON, OHIO – Michigan’s Sven Baumann (Trek CX Collective – Wolverine Sports Club) and Ohio’s Katie Arnold (Bob’s Red Mill) each overcame some miscues to take wins at the Zipp OVCX Series race #11 between Cincinnati and Dayton at John Bryan State Park in Yellow Springs, OH.  Presented by Buckingham Financial, the race unfolded after three solid days of rain.  The skies dried up on race day but left behind a challenging course with slippery corners, risky singletrack and a tricky off camber ascent which turned out to be a determining factor in both the men’s and women’s Elite races.

The OVCX Series wraps up Sunday with the finale at the IndyCycloplex near Marian University in Indianapolis. The final race, presented by Matthew’s Bicycles, will use the grounds surrounding the famous Major Taylor Velodrome and will include a post-race party and raffle along with Sun King beer and numerous food trucks on site throughout the day. It was short lived and Tieman and McShane soon fell off the pace, leaving Haley, Petrov and Baumann at the front.  “They didn’t make it easy for me to pass,” said Baumann after the race, “but once I got to the front we soon dropped Spencer.”  The 15 year old Petrov, who led the race for a lap, was doing an all-out 35 minute effort to prepare for the upcoming National Championships 15-16 event.  “Luke was a bit tougher but I could tell the pace dropped whenever I let him get to the front.”  Haley wouldn’t make it easy, sticking with Bauman for most of the race.

However, with two laps to go Baumann got a small gap on Haley and stretched it.  “I tried not to lose any time in getting through the lapped traffic without being a jerk to them,” added Baumann on his way to a win.  “It might have been different if there was more rain.  Big thanks to my Wolverine Teammates and to the Trek Cyclocross Collective for the support.  Behind, David “Shawn” Adams (Cycle Smart) stayed on the gas and continued snagging spots throughout the race.  He picked off a fading Tieman on the last lap for third.  McShane would finish fifth. 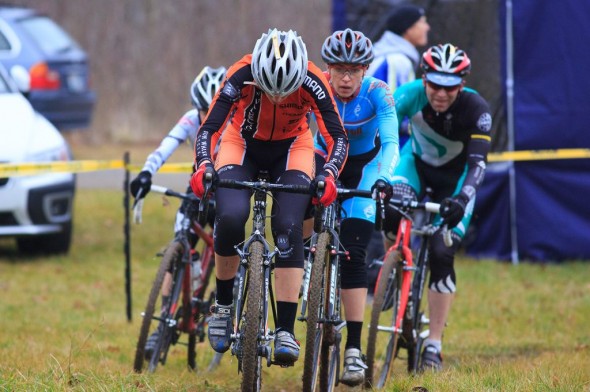 She took the hole shot from the grass start.  All went smoothly till she hit a steep little muddy climb on an off-camber left hand turn.  The greasy spot had claimed riders all day.  It was rideable, but many opted to run and not chance a washout in traffic.  Arnold chanced it, spun out and left the door open for Terri Meek (Don Walker Cycles Racing) to snag the lead.

One turn later, Arnold hit the deck again on the pavement through the start finish.  She was slow to get up.  The whole time, Meek dug deep stretching the gap.  Sarah Fredrickson (Speedway Wheelmen) snuck by for second.  “I slammed the ground pretty hard on to my right hip, and bent my derailleur,” said Arnold after the race.

Perhaps fueled by adrenalin, Arnold got up, chased hard, passed Fredrickson and caught Meek.  “I sat on her wheel for about a half a lap and then busted a move.”  She opened up a gap, but her problems weren’t over.  She would wipe out two more times, catching her bars in course tape and another time on the same muddy off-camber corner climb.  Still she managed to hold off a determined Meek for the win.

Behind another mountain biker like Meek, Gerri Schulze (BioWheels/Reece-Campbell Racing) raced clean, strong and smooth.  She caught and passed Fredrickson and Meek and slotted in for second overall and first in Masters Women.  Meek hung tough for third. This week, the last OVCX Athlete-of-the-Week honors go to Luke Haley (Bob’s Red Mill) and Gerry Schulze (BioWheels/Reece-Campbell) for their performances in Dayton at this past weekend’s event.  Both athletes will have the opportunity to race on Zipp 303 Firecrest Tubulars this weekend at the Indy Cycloplex Finale.  Congratulations!!