Beer up? How about a slushy-up instead? 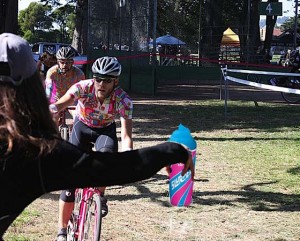 Could slushy hand-ups become all the rage?

It’s hot. 98 degrees hot. I’m training hard, pushing my body against the limits that the sun-baked air imposes on me. I could go faster, longer, but the heat strangles me; the thermal waves waft up from the road and wrap their tendrils around my throat, lungs, and my body suffocates. A mini-mart appears ahead of me, as spectral an image as a desert mirage, and I doubt its air-conditioned interior and ice-cold confectioneries until I am standing on the cool linoleum floor, panting and dripping sticky, salty sweat.

Gatorade, I think. But as I start to walk to the rainbow-colored refrigerator, I pass a machine of my youth – of knobby knees and Walmart bikes making grand six year-old summer adventures to the corner market three blocks away – a machine slowly churning liquid ice of unnatural reds and blues. With the logic of the half-delusional, and with more than a little nostalgia, I decide that since ice is colder than water, I need a sugar-filled, artificially-flavored slushy, not some electrolyte-infused liquid fuel.

The gooey ice mixture – cherry, of course – oozes out of the machine and begins to gather like molasses into my cup. Memory and instinct take over, and I release the lever with perfect timing, styling an impressive pompadour of cherry slush from the crown of the cup. I pay the man at the counter, who with good reason is looking askance at the spandex-clad man before him.

So too is it instinct to drink at just the right rate which prevents a cold-headache, but guarantees impulsive consumption, and down the slushy goes. My cup is empty, my tongue is bright red, and a gentle coolness courses through my body, insulating me from the heat. I hop on my bike, refreshed, and pedal away.

And pedal I do. Harder, longer than I had been able to before. The heat is there, yes; I begin to sweat, yes. But my legs seem to have just a little extra, my lungs seem to be holding off the broiling heat just a little bit longer, and I can’t help but wonder if the slushy – that embodiment of youth – has imbued me with a little bit of childlike invulnerability.

And, to an extent, that may just be the case. For while the account above is slightly altered (I did go for the Gatorade, since I hadn’t yet read this study), the science behind it is not. Apparently, a group of scientists got a little nostalgic themselves, and decided to see what would happen if athletes were given an “ice slurry” (think slushy-version of an electrolyte drink) as opposed to cold water before being asked to run themselves to exhaustion in 93 degree heat. The results, published in Medicine and Science in Sports and Exercise, found that those runners who had ingested the slurry prior to exercise were able to hold off exhaustion 19 percent longer than those who had only drank cold water. Further, the slurry-drinkers reported lower perceptions of heat sensation and exertion during their workout. It seems that since the slushy consists mostly of ice particles floating in water, it can remain below 32 degrees and still be a liquid – effectively dropping your core body temperature half a degree lower than even the most frigid beverage could do. This translates to better, longer performance, even in extreme heat conditions.

So what does that mean for us? While it’s true that much of ’cross happens in the rain, sleet and snow – when the environment itself is a slushy, you probably don’t need to ingest one – there are still times when blending up your favorite electrolyte mix with some ice might not be the worst idea. Shoulder season races can get pretty warm, as can many races in certain parts of the US (Arizona and Belgium experience slightly different Octobers). Warming up on a trainer can often cause overheating even in cold environments, so a slushy pre-race might help normalize your temperature. Also, new UCI regulations allow hand-ups in temperatures above 68 degrees, and what better way to celebrate the spirit of ’cross than to snag a 64oz Coca-Cola slurpee?

Basically, ’cross is about mastering the demands of whatever environment you find yourself in; if that environment happens to include a blazing sun launching fireballs at you, consider making a pit stop at the 7-Eleven on the way to your race, and indulge in a little childhood nostalgia. Training Tuesday: Planning for, Performing in and Recovering from Hot Races