The “New” Face on the American Elite Men’s Team: Stephen Hyde and His Path to Tabor

Racing, Belgium, and the World Championships

After a spectacular early season in the United States capped by a UCI-C1 podium in Iowa, Hyde boarded a plane for Europe. That trip was his first time racing abroad and the first time in the past two seasons he hadn’t been at the front end of the race.

“The goal of that Euro trip was simply to take in and understand what it will take to come back. I’ve had little time to make the improvements I know are needed but now that I know what to do I can expect it and work toward these new goals.” 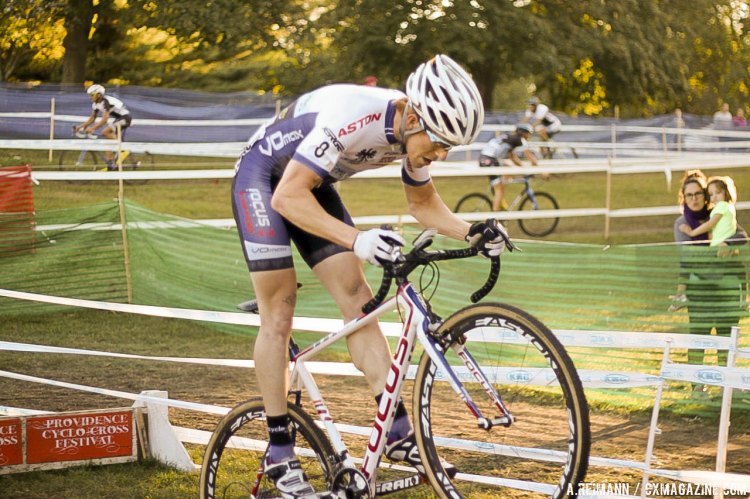 Hyde hopped his Focus Mares to a win at Providence on Sunday. © Andrew Reimann

While we might see his top-30 results in Belgium as respectable rides, for a competitor like Hyde going from winning races to just fighting to finish on the lead lap is a tough mental task.

“It’s easy to remember the good rides and to pull the motivation from wins. When the crowd is screaming your name lap after lap you get this unstoppable feeling. It’s a feeling you never want to go away,” Hyde says.

“One has to remember to live in the moment and take full advantage of the present situation. Finding myself in 30th place halfway through a race was shocking at first. Fighting for dear life after being at the front of so many before is a truly humbling experience. Knowing that every race is a learning experience that pushes you beyond what you know and expect is key to becoming successful in this sport.”

It would be easy for Hyde to have given up on his European trip, easy for him to settle into a comfortable life as a top-level domestic rider in the United States. But that idea, that comfortable life, is simply not what Stephen Hyde is about. Racing in Belgium means that Hyde is forced to continually improve and grow if he ever wants to join the front of a race at that highest level.

“I am of the opinion that you only get out of life what you put into it. I’ve always found people to be around that will push me beyond my self-imposed limits. This is the same in cycling and in life.”

Pushing those self-imposed limits has earned Hyde the opportunity to race in the American jersey this upcoming Sunday in Tabor. His impressive early season results and sixth place at the National Championships earned him a place among America’s best.

Just earning a place on the team is for many American riders only a small part of the battle. On top of that, many riders—Hyde included—have to finance the entire trip and a hefty coaching fee just to make it to the Championships. Luckily for Hyde, Jeremy Powers stepped up and invited him to tag along for the trip. While this cut the hotel and travel costs down substantially, Hyde was left to come up with over $4000 dollars on his own. Hyde swapped bikes frequently in an effort to cope with the muddy conditions. © Todd Prekaski

“If we have learned anything this year, it’s to never doubt the Cyclocross community’s generosity.” With the help of friends Hyde set up an online fundraiser that raised well over that amount in only two days. He explained, “The rest of the funds will go straight to the JAM Fund program, which I am very happy about. I really love the program and hope to continue supporting them as much as they have supported me. THANK YOU to everyone who helped out!”

On top of support from JAM, Powers, and the whole cyclocross community, SRAM stepped up with Force CX-1 group sets for him to ride.

For much of the season, Hyde had been one of the few elite riders to run a SRAM Force bike with a front derailleur. Hyde explains, “It wasn’t much of an option, but what we chose to ride as a team.”

However, after his success at Nationals and his being named to the Worlds team, SRAM sent Hyde two new CX-1 groups.

After riding both he says, “I can easily say that although a double chain ring set-up never stopped anyone from winning, there are certainly advantages to having a good single ring set-up. I for one am excited to finally be on CX-1.”

Hyde is now on his second trip to Europe in the last two months. “I am coming to terms with the idea that I may actually belong here,” he said. “I have been given the opportunity to try it out; to see if I can handle the racing and the culture change. It’s not set in stone, but I am looking forward to spending more time here.”

“I think I’ve learned that it takes belief in yourself to make all of this work, no matter how much support or natural ability you may have. You have to want to be doing this. I want to be here!”

At World’s, as per usual, Hyde has pushed himself with a challenging but obtainable goal: to finish on the lead lap. He elaborates, “I was finishing two to four minutes down in the BPost Bank and SuperPrestige races in November. I am more confident. I have a team and crew that I know and trust. It’s huge to have people you know here with you.”

In many ways, Hyde is an embodiment of North American cyclocross. Unlike so many of our European counterparts and much like Hyde, few of us grew up as cyclists and even fewer in cyclocross.

Look for Hyde to continue this trajectory next season as he plans another trip to Europe, hopes to race the potential North American World Cup events, and seeks excellence in the domestic circuit. “Now it’s time to keep going. I have momentum and plan to keep moving. I am very driven to make this next season and the seasons to follow very special.”

Stephen Hyde will start the Elite Men’s race in Tabor on Sunday at 8:00 EST, and will have bib number 42.

Previous post Descending From the North: Catching up with the Canadian Elite Worlds Team Before Tabor - Updated