This week was the 10th event of the Southern California Prestige Series of Cyclocross: LIVE! Long Beach, CYCLO-FEST, an idea of promoter Dorothy Wong, advocating a healthy lifestyle and promoting the benefits of the bicycle within each community the Series visits. This is the fourth time El Dorado Park has hosted a ’cross race, but never has it been like it was this past Sunday. The usually sunny Southern California weekends turned into dark cloudy and cold (40s) as SoCalCross saw its first moments of Fall this first week of November. In addition to falling back with the time change, the stormy weather blew through the City of Long Beach presenting some real cyclocross conditions.

The course was a mixture of about 70% grass, 20% paved and 10% sand and dirt. The grass, while absorbing most of the rain, did have a bit of mud and a lot of heavy pedaling sections. The pavement became an area of strategy for racers to recover and the deep left curving Shimano sand pit was the one of the biggest challenges as riders continuously struggled trying to ride the pit. The biggest challenge of all really just came down to muddy turns and the SPY staircase.

Elite Women:
Jenna Jammer Kowalski (Cynergy Cycles) was hot off the start, grabbing the hole shot and pushing the pace through the first half of lap one. The rest of the women lined up after the first turn to chase down Jammer. Series leader Allison Mann (Rock N’ Road) was a few wheels back and Christina Probert-Turner (The Team SoCal Cross) made the first move in the chase coming out of the sand and making her move to past Jammer to take the lead. The rest of the field responded to new pace Turner was pushing as she blew things apart on the second lap taking only a few select riders with her up front.

After Turner, it was Mann who continued to work her way up and set the fastest lap of the day, on lap three, as she took control of the race. The entire race remained close as Mann would open some space Turner would close it down. The rest of the women worked hard in the battle for third as these two gained five to ten seconds on the field each lap. Eventually, Mann took the win holding off Turner as the two put together some amazing racing.

Amanda Schaper (Ritte Racing) made her move around Jammer early was close with the leaders for a couple laps but settled in for third just ahead of Jammer in fourth. Fifth was Nicole Brandt (LA Velocity) who had a great start and was consistent all race to hold off the experience of Series leader, Dorothy Wong (The Team SoCal Cross).

The first few laps from front to back were aggressive, blocking, bumping and fighting for positions. Douville attacked at the end of lap one before the log jump so that he could get a clean bunny-hop over it, but B. Gritters blocked and K. Gritters took the outside line attacking into the log section. Through the first two laps this seemed to be the case. There was a lot fighting and blocking for position especially as the Gritters’ brothers strategically tried early tactics.

A few laps in and Douville led the chase to bring K. Gritters back in to the group. Jackson has seemed to have a string of bike issues lately and again he had to pit a couple times which unfortunately pushed him back in the field. The sand section ended up being where gaps were opening and Douville lost ground mid race.

With two laps to go the group of four was back together but B. Gritters again cleans the sandpit and attacks. Prenzlow dismounts which slowed the chase and again Douville was chasing with K. Gritters on his wheel. This time B. Gritters and Prenzlow who quickly surged back up created a big gap that could not be closed.

K. Gritters flats right at the bike pit and Douville attacked ahead to hold off Behrens who was maintaining a close 5- to 10-second gap. In the end Brandon Gritters took the win to continue to secure his SoCal Series lead. Prenzlow was a close second, third was Douville, with Behrens just behind in fourth and Kyle Gritters to round out the top five.

Next week the Series will head inland from the beach for Velocity Cross in Chino, California. November is California Cyclocross (CACX) Championships month. One race in each region will yield rankings, equating to starting positions for the NorCal/SoCal Showdown and end-of-season finale in Bakersfield, January 21st and 22nd. Saturday the 21st will be the Prestige Series finale and Sunday the NorCal/SoCal Showdown.

Next post Cyclocross to Debut at Sea Otter Classic 2012

Previous post Two Months Down, Four to Go: A Column by Christine Vardaros 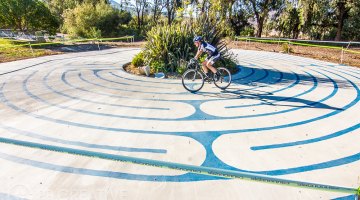