Ryan Dahl (SPY Giant Ride) captured 35+ A both days, turning some of the fastest laps of the weekend. © Philip Beckman/PB Creative

(San Luis Obispo, CA) – Two hundred and fifty miles is a bit out of the comfort zone for many cyclocross competitors in Southern California. If an event is more than an hour or two from home (not counting the area’s often crushing traffic), a lot of riders will opt for pedaling from their garage instead. Or check the surf report.

But the SLOcross simply had too much going for it. The fifth edition of the event dangled a fresh, juicy bundle of carrots to bring CX enthusiasts from SoCal (and beyond) all the way to San Luis Obispo. Valuable points were being served for both the SoCalCross Prestige Series and the new SPYclocross Series, as well as USA Cycling rankings. This was also a part of the new California Cyclocross Series (CACX). A generous prize list added to the attraction. And being located only seven miles inland from the coast, one could still check out several sweet surf spots. The local cycling club, SLO Nexus, ran a tight program for two days at El Chorro Regional Park, under perfect bicycle racing conditions on a grassy, bumpy, serpentine course featuring numerous 180-degree turns and never ending, soul-crushing climbs. It was a technical power rider’s course, favoring those with the ability to carry speed through slow corners and over the “gopher cobbles,” and then sprint hard from almost a standstill a few dozen times per lap. The course direction was reversed on day two.

In Elite Category 1 Women’s action, multi-time masters class World CX Champion Karen Brems (Team Rambuski Law) and Nicole Brandt (LaGrange/Michelob Ultra) split wins and runners-up over the two days. These two stayed close for most of their five laps on Saturday, until Brems was able to escape on a descent on the last lap. Early leader Christina Probert-Turner (The TEAM SoCalCross/Turner Bikes) held on for third, followed by Brems’ teammate, Katrina Baumsteiger, and Tanya Grossman. 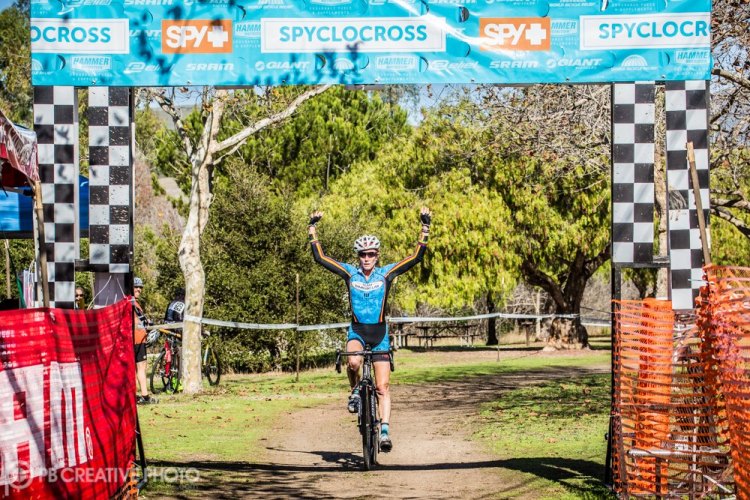 It was a different story the next day, as Brandt appeared to be on a mission. Brandt shot to the fore at the whistle and after only one lap had gapped the field. She avoided the mishaps that had vexed her the previous day, and finished a minute and a half up on Brems. Baumsteiger was again third, with Probert-Turner not far behind. Young Summer Moak (Felt/K-Edge) held on for a podium position, despite cracking on the last go-round and losing a couple of positions. 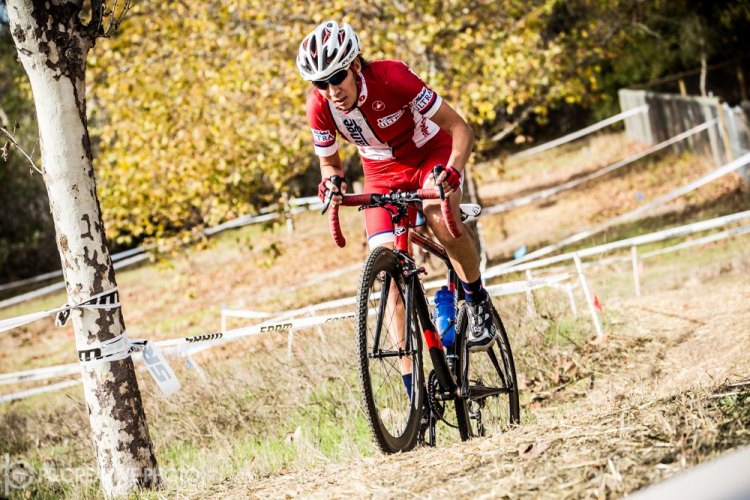 A hockey game broke out during the Men’s Elite Cat 1 race on Saturday. Having dispatched breakaway partner Andrew Juiliano (Voler/HRS/Rock Lobster) with two laps to go, Elliot Reinecke (Famous Horsemen/Focus/Velo Hangar) and Brandon Gritters (Blackstar/Rock N’ Road) dropped their gloves and got unusually physical. Elbows, shoulders and bikes were thrown, and both spent a few moments on the turf.

In the end it was Gritters leading by a bike length at the line. Afterwards it was all laughs and backslaps, just another day in the cyclocross trenches. Juiliano rolled in alone for third, Victor Sheldon (SPY/Giant/Hammer) was fourth and Brent Prenzlow (Celo Pacific/Focus) fifth, having lost Sheldon’s wheel when he got tangled with course tape exiting the barriers on the penultimate lap.

A surprise was in store for the guys on Sunday, as Trek Cyclocross Collective’s Matt Shriver took his spot in the pits with little fanfare. Shriver is a former top all-around pro cyclist and national ‘cross champion who supports CX stars Katie Compton and Sven Nys on the World Cup circuit. Shriver happened to be in the area to visit his girlfriend and escape winter at his Durango, Colorado, home during a break in the Euro calendar. Getting in some rare race training for the upcoming nationals was the goal.

A back-row starting position and then a missed pedal put Shriver in second-to-last place rounding the first turn. Things became even more challenging when his handlebars slipped down on the first lap. Gritters and Reinecke established themselves at the front of the field by the fourth of nine laps, and although Shriver was picking off positions steadily, he was nowhere in sight of the leaders. And then all of a sudden he was. Shriver made contact with the leaders on lap six, just as Reinecke rolled a front tire and was forced to the pits for another bike. Gritters had nothing left for Shriver, who was soon away on his own. Reinecke was also on the move, charging back into second place a lap later; it was too little, too late.

Shriver was modest across the line, winning by a half minute over Reinecke, with Gritters another half minute back. Prenzlow was fourth and Sheldon, dealing with a slipping seat post, rounded out the podium.

Full results from the SLOcross weekend are available at quickndirtymtb.com.

The highlight of the SoCal ‘cross season comes up next weekend, 11/22-23, at Griffith Park in Los Angeles. It’s the SoCalCross UCI CXLA Weekend at the Greek Theatre, expected to bring in a stellar lineup of national-caliber teams and riders from around the country.

Next post Your Moment of SVENNESS 1.1: An Old Look at a New Result, Run or Ride?