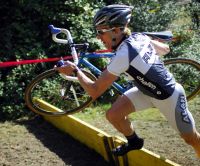 By Mark Drajem, Photos by Joe Foley and Joel Gwadz

October 27, 2008; Washington, DC, USA: Weston Schempf of C3-Sollay.com claimed his second consecutive victory in the DCCX Cyclocross Race, which is presented by DCMTB/City Bikes in Washington, D.C. The race, held on the grounds of the historic Armed Forces Retirement Home, is the third in the BikeReg.com MABRA cross series.

In the Whole Foods’ women’s elite race Patty Buerkle of Vanderkitten took a flier from the leading group of women’s riders and got into a two-woman breakaway with Kristin Gavin of Human Zoom/Pabst Blue Ribbon. Buerkle broke away later in the race to win it all. Sobe – Cannondale’s Betsy Shogren, who won the event last year, ended up third.

The race, the only cyclocross race held in the nation’s capital, had more than 400 registered riders, and hundreds more spectators who came out to enjoy the grounds of the AFRH, the frites prepared by biking legend Scott Scudamore and lots of free-flowing refreshments.

The Belgian Embassy chipped in too, sponsoring the Li’l Belgians kids’ race, which had more than four-dozen competitors ranging from age three to 10. Anxious parents were treated to a tasty Cote d’Or chocolate after their kids’ raced.

The race was held on a classic, European-style cyclocross course, with lots of transitions from road to a grass. The course was softened but not thoroughly muddied by a pounding rain the day before. The course had a tricky barrier and some slick roots to keep things interesting; even a few of the top riders sported bloodied shins or lips by the end of their races.

Whole Foods upped the payout for the elite women this year, and the field of 22 starters was nearly four times as big as last year’s and the largest women’s elite field in MABRA’s history. Mid-Atlantic cross “just seems to get more and more competitive,” said Gavin, who drove in from Philadelphia for the race.

The elite men’s race, with 35 starters, had a field twice as big as the 2007 DCCX. It showed. Schempf, who lives in nearby Bethesda, moved out front with a group of five riders early in the elite race, including teammate Gallagher. They put distance on any chasers, but with ample open road sections, no one could break free of the pack.

With a few laps to go, two members of the group crashed coming on to a small bridge, and Schempf jumped free. Gallagher, who had his bike slide out from under him as he vied for the lead in the elite master’s race a few hours earlier, avoided that crash and stuck close to Schempf for second.

“It’s a deceptive course,” Schempf said. “It was nice to know I didn’t have to do all the work alone.”

Blair Saunders of Henry’s Bikes, who led a futile effort to catch Schempf in DCCX last year, instead rode away from a stacked field in the elite masters race this time around. Saunders eased off the gas as mountain-bike legend Gunnar Shogren of Sobe – Cannondale and Mark Kutney of Van Dessel Cycles fought it out for the first-lap prime. He put an attack on them just a few minutes later.

“They weren’t motivated to chase,” Saunders deadpanned. From that point, only Gallagher could fight his way onto his wheel, but “he took the corner too hot, and that was the race,” said Saunders, who won by 10 seconds. “I wish every course could be like this, with this many road sections.”

The Cat 3/4 race was also decided by a crash. The race leader hit a slick root on the back of the course, went flying, and took down Adam Driscoll of Adventures for the Cure, who was cruising along just behind him. His brother Alex, in the third spot, just steered clear of the carnage, but wasn’t so lucky a few minutes later when a lapped rider swerved into his path. Ian Mathias of Hunt Valley Bicycles won the race; Alex was second and Adam third.

In the women’s 3/4 race, which had a Mabra-record 34 pre-registered riders, mountain-biking ace Lynne Oliver of DCMTB crushed the competition in her first-ever cyclocross race.