The Country Road Bob singlespeed dates back to Van Dessel’s earliest days and with its iconic green, swoopy aesthetic, was a company mainstay for the first half of the company’s two decades. The company stopped making the bike several years ago, but at Interbike last September, we learned Van Dessel is rebooting a modernized version of the classic eye-catching bike.

The new Country Road Bob design moves some of the curvy lines and adopts modern amenities, but its shiny brushed aluminum finish makes it as attention grabbing as the original.

After seeing the new (old) singlespeed cyclocross / gravel bike at Interbike, our Cyclocross Magazine team snagged one for review. This In Review spotlight takes a look at what’s new with the classic Country Road Bob. Stay tuned for a long-term review. The various iterations of the Country Road Bob frame have drawn attention thanks in part to their curvy approach to frame geometry. Old CRB frames had a mix of curved down tube and top tubes, and the updated version of the alloy bike employs a kinked top tube (further forward than the Canyon Inflite) and a curved seat tube. The new CRB retains the light green paint with brushed aluminum finish to give it a marked throwback appeal. The carbon 15x100mm thru-axle front fork adds some black to go with the green and brushed aluminum. Two decades have passed since the CRB first came out in 1999, which is several eons in bike tech time. The new model adopts modern amenities, including front and rear thru-axles and flat mount disc brakes.

The singlespeed setup also includes an eccentric bottom bracket in a PF30 shell. This setup is easy to adjust, which proved useful because the bike comes shipped with an ultra-tight chain. Should you tire of the one-gear life, the 2018 Van Dessel Country Road Bob singlespeed cyclocross / gravel bike will help you switch over to a derailleur. © Cyclocross Magazine

If you are looking for tire clearance and wheel type versatility, the Country Road Bob has it. The bike comes stock with 650b x 27.5” wheels and WTB Byway 47mm tires. If you want to run 700c wheels, Van Dessel claims clearance for up to 40mm tires. 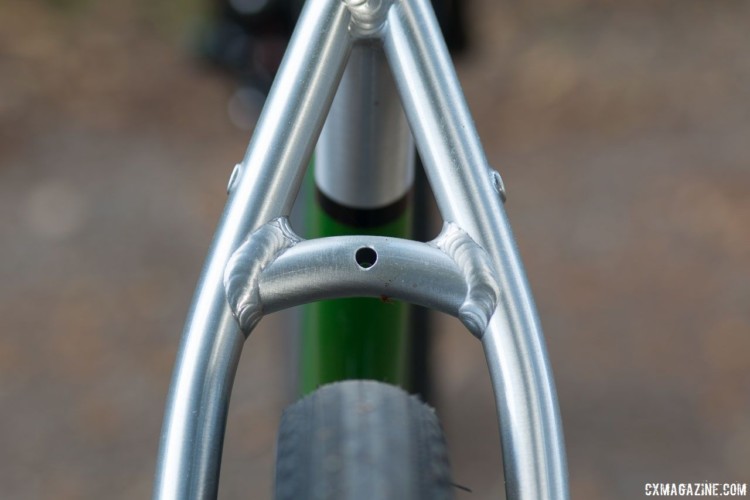 There’s plenty of clearance around the 650b x 27.5″ WTB 47mm Byway tire out back. You can also run 700c wheels, but it comes stock with 650b hoops. 2018 Van Dessel Country Road Bob singlespeed cyclocross / gravel bike. © Cyclocross Magazine

Van Dessel offers the Country Road Bob in five sizes, including a 62cm frame for the tall riders of the cycling world who seem to gravitate to Van Dessel’s team. Our 56cm test bike has an effective top tube length of 56cm and seat tube length of 54cm. The wheelbase is 104.5cm, with an average (because of the eccentric BB) 44cm chainstay length, 15cm headtube and 72-degree headtube angle. Interestingly, the bottom bracket is fairly high, with an average drop of just 6cm. To round out the measurements, the stack is 56.5cm, reach 38.7cm and the stand over clearance is 80.1cm.

With a name like Country Road Bob, it is probably fair to expect the frame to come outfitted for long days in the saddle. The CRB has eyelets for fenders and racks and bosses for three water bottle cages on the frame and two more on the carbon fork. The 2018 Van Dessel Country Road Bob is ready to carry a load for commuting, touring, shopping at the country store or a rack-based kid trailer. © Cyclocross Magazine

The Country Road Bob comes stock with a 38t front chain ring on a 5-bolt alloy crankset and rear 20t cog. Owners can add a clamp-on front derailleur or rear derailleur if they want to swap it to a geared setup. The disc brakes are hydraulic TRP Hylex flat mount with 140mm diameter rotors front and rear.

The stock wheels on the CRB are alloy 650b WTB Frequency i23 tubeless-ready rims with Van Dessel Hubs. The rims have a claimed weight of 478g each and 32 spokes, so they are more built to last than light. The Van Dessel Country Road Bob singlespeed cyclocross / gravel bike has been around since 1999, yet the 2018 version feels more retro with a healthy dose of drillium at the chain rings and brake levers. © Cyclocross Magazine

Although the Country Road Bob is relatively new to our test garage, we have gotten it out for a few rides already. We cannot read Van Dessel owner Edwin Bull’s mind, but it seems Van Dessel made the bike with non-committal types in mind. Can’t decide on wheel or tire size? Curious about singlespeed but not sure if you’re going to commit to one or the other? Hope to do some touring or bike packing? The 2018 Country Road Bob says, “Can’t Decide? No problem.”

As far as the initial ride, aluminum may have a reputation as a harsh material, but the 650b wheels with the 47mm Road Plus tires and the CRB frame provide a plush, comfy ride.

The TRP Hylex brake levers are a joy to hold and add to the ride comfort. Their braking might not be on par with Shimano or SRAM hydraulic calipers, but they are adequate and the long hoods and contoured levers are among our favorites. No magic, no problem. The 2018 Van Dessel Country Road Bob singlespeed cyclocross / gravel bike features vertical dropouts and an eccentric bottom bracket to tension the chain. You won’t need a half link. Bikes are shipped with the tension way too high, but your dealer should hopefully adjust it properly © Cyclocross Magazine

It’s not a complaint but it is worth noting for the obsessive cog-swapping singlespeeders, the dedicated freewheel-based rear wheel makes sense and likely saves money, but it’d be easier to have a freehub wheel for easier cog changes. How many of us still have freewheel tools?

In addition to everything we like so far, we do have some nitpicks. Two-bolt seatposts better withstand the forces of cyclocross remounting, so it is a bit surprising the company that supports Caroline Mani, Cassie Maximenko and Sunny Gilbert went with a one-bolt seatpost. The 2018 Van Dessel Country Road Bob singlespeed cyclocross / gravel bike may not be aimed just at cyclocrossers, but anyone looking to do a moving remount may want to replace the notched one-bolt post with a two-bolt version. © Cyclocross Magazine

The stock handlebar is 42cm wide, which some singlespeeders and mountain bike converts might find narrow. Singlespeeders looking for a wider bar with more leverage will have to swap in a 44cm or wider bar.

Our test bike came with a non-TCS, wire bead version of the WTB Byway tires that weigh an average of 710g each. The tubeless versions that Van Dessel advertises as stock on the bike save a good 350g total versus the tires our bike came with. Overall, the Country Road Bob is heavy for an alloy singlespeed with a carbon fork, but the going tubeless with the new tanwall tubeless Byway tires will make it a bit lighter.

For more on the rebooted Country Road Bob, see the specs and photo gallery below. Stay tuned for a full ride review.

Next post Throwback Thursday: Major Taylor and the Story of the Six-Day Race - Video