Reflections from the Bike Lane: ’Cross Commuters vs. Roadie Commuters 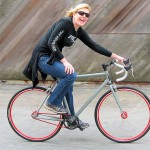 There’s a distinct change on the streets of cities lucky enough to have vibrant cyclocross scenes, and Wil Catlin’s taken note. Wil’s a self-described “40ish, skinny road drone who started bike commuting a couple of years ago as a way to save money for those calf implants I’ve always dreamed of…”

Autumn in Portland usually means three things: foggy morning commutes, bike lane echelons, and (best of all) Roadie v. Crossie flame wars on [the local listserv] OBRA chat. YES. Love those things. But what’s up this year? Fog: check. commuter minions: check. Flame wars: nada, zip, zero. The best y’all can muster is to correct course lengths and propose alternate usages for membership cards. BORING. So let’s take a new angle on this: from the perspective of a year-round bike commuter who’s watched all the peaks and valleys of your periodized training from the bike lane, let me state for the record: ’cross commuters are SO LAME compared to roadie commuters! Yes, they totally are.

How am I certain I can correctly identify a ’cross commuter (and, therefore, assert so positively their lameness)? Can’t believe you need to ask, as they are so clearly differentiated, starting from the jaunty little elbows of their cantilever brakes and their bald commuter tires (no cash left after buying fancy handmade disgust tubulars), to their preternaturally clean vinyl roll-top tube packs and Swurve capris hiked up just far enough on the drive-side to show their new calf tats. But most obvious is their combination of ferocity and utter lack of endurance. They skip to the front of stoplight lines nattering about their new call-up position after Heifer farms and sprint up bridge risers (“hill interval” in ’cross-ese) only to fade mid-span like Rasmussen in a headwind, clogging the lanes and muttering about pain caves.

Just yesterday morning I was passed by a whole peloton (two) of these guys, drilling it up the Hawthorne bridge in the pre-dawn gloom, their ant-blinkies visible from at least 10 feet away. They took the heroic hole-clot onto the sidewalk single-track and promptly died over the slight deck rise into town, refusing to let folks pass even though we were jammed up on their wheels like so much Alpenlily mud. And it’s not just bridges and lights that provoke these surge/sag cycles. Squirrel by the road? JUMP. Styling commuter in cowboy boots? JUMP. Sigh.

Makes me nostalgic for those Tuesday spring mornings when I’d tempo along Ankeny and stay far to the right while five-figure Colnagos passed me like sportscars on the autostrada, their pilots clad in Sisi carbon-soled shoes and Crooks Bros. shirts, ties flipped casually back and one hand busy texting paralegal assistants about how they have to leave by 5:15 sharp to make their PIR start time and, oh, could they track down the Raffi shipment that was supposed to come in yesterday? Good times. At least those guys could hold pace, even if they always slow down a little when passing so you can latch on, then slowly ramp up speed and drop you like a humiliated Albert in snow. Yeah, on the commuter front, Roadies have it all over the Crossies. Give me passive-aggressive commuting, any day.

Aw, who am I kidding: I love you all. Really. Except maybe for the Masters 50+ Intel commuters who have impossible outdoor-tans all year round, outsized calves and lungs, who insist on climbing through the zoo when Fairview is clearly quicker and less icy, and pass me in January going DOWN the backside of the 26 bike path, no matter how fast I pedal or try to ignore the fact that a chamois just does not provide adequate wind protection in sub-freezing weather … those guys I only kinda’ like!