Adam Myerson addresses the crowd as champion of the Verge Series in 2010. © laurakozlowski.com

The newly redesigned Verge Series, focused on supporting amateur and elite talent in the Northeastern US, will begin its tour of New England with the 13th annual Green Mountain Cyclocross Weekend. On September 15th and 16th, Rounds 1 and 2 of the UCI series will be held at the Catamount Outdoor Family Center in Williston, Vermont.

Tim Johnson, Jonathan Page, Adam Myerson, and Shimano New England Professional Cyclocross Series overall and U23 jersey holder Luke Keough will be mixing it up with last year’s winner of GMCX day 2, Frenchman Nicolas Bazin. Ted King will also be lining up for his only cyclocross races this season at GMCX, following a successful grand tour season with Liquigas-Cannondale. “‘Cross, Vermont, and fall is just the perfect Venn diagram of excellence,” said King when asked what drew him to once again depart from his usual cycling discipline after trying GMCX last year.

This weekend of racing offers participants from all over the region a perfect New England weekend of racing with the gorgeous Vermont landscape as a backdrop at the Catamount Outdoor Family Center, close to Burlington’s vibrant town center. Racers will enjoy a classic and challenging hillside course requiring extreme strength and skill to conquer, as spectators watch the race unfold against spectacular views of the mountains.

To underline the commitment of the Verge Series to developing emerging talent in New England, former US Cyclocross Champion Jonathan Page will be offering a youth cyclocross clinic following Saturday’s race. This clinic offers a fantastic opportunity for youth to learn cyclocross skills from a successful racer experienced in racing internationally.

After a year-long UCI-imposed hiatus, Elite racers will once again compete for UCI points in addition to Verge Series points. Among the contenders for points in the Elite Men’s race will be Nicolas Bazin, the French racer who won the second day of the 2011 race, pro road racer Ted King of Liquigas-Cannondale, Tim Johnson, and Jonathan Page. The Elite Women’s competition will include Crystal Anthony, who won the first day of last year’s Green Mountain Cyclocross Weekend.

This race will be the first opportunity for racers to earn Verge Series points in ten total categories including Juniors, Amateur Men’s and Women’s, and Masters men’s and women’s fields in addition to the Elite fields. The points competition will challenge a wide range of racers to do their best against their peers on courses set on a range of rugged New England terrain. This year’s updated and expanded Verge Series points competition offers completely separate divisions for Amateur and Masters women, answering the need created by explosive growth in women’s racing in recent years. In addition, Junior girls between the ages of 10 and 14 race in their own points competition for the first time.

The 3rd and 4th Rounds of the Verge series, Downeast Cyclocross, will take place on October 20th and 21st in New Gloucester, Maine, where racers will face a demanding course at Pineland Farm. On on November 24th and 25th, the champions in all categories will be clear by the close of Rounds 5 and 6 atBay State Cyclocross in Sterling, Massachusetts on a classic New England cyclocross course developed by Tom Stevens. 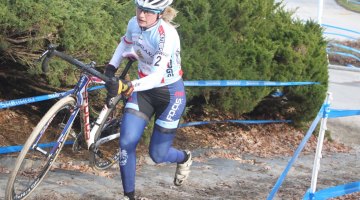 In The Saddle With Adam Myerson: Elite Racer, Coach, Captain, Manager and Organizer