Vardaros’s Stevens, cleaned up and ready for Paris 2 Ancaster next week. © Christine Vardaros

Lining up for a mixed terrain race or gravel grinder? The biggest question is often which bike to bring, and which tires to run. The debate is a hot one especially for a brand new event, like California’s Lost and Found gravel grinder, but for a race like Paris to Ancaster this weekend, it’s still a tricky decision that depends a lot on weather and rider.

Christine Vardaros brought her Stevens Superprestige bike over from Europe to contest today’s event, and took a look at her ride.

For those of you who spotted Cyclocross Magazine contributor and pro racer Christine Vardaros in the European ’cross scene last season, you would have noticed two new looks she’s been sporting—her kit and her bike. Those of you in Canada for Paris to Ancaster this weekend can also see her and her new Stevens bike there, as she races and conducted a women’s clinic the day before the race.

The Stevens name has been a fixture in the Belgian cyclocross scene for many years now. It was first become popularized through the likes of Hanka Kupfernagel, Marianne Vos, Katie Compton, Daphny van den Brand, Sanne Cant, Niels Albert and a slew of other top athletes. Today, Stevens is a hard brand to find in the States, after parting ways with its distributor, but over in Europe, it’s ridden by Vardaros and the Belgian-based Kwadro-Stannah Team,  which includes Martin Bina, Radomir Simunek, Mariusz Gil, Marcel Meisen, Julien Taramarcaz, and brothers Laurens and Diether Sweeck.

Vardaros rides the Super Prestige 2014 model, and like any well-trained sponsored athlete, is excited to talk about her bike and components and what she likes about them. She explains, “For the 2014 Super Prestige model, the frame is designed for internal shifting and brake cables to give it a clean and tidy look. Also, the frame and fork combo has also been lightened.”

While the carbon frame certainly has modern features, Vardaros’ bike is old-school to some degree, with cantilever brakes, 10-speed components (both still very common in Europe), and a wide handlebar and short cranks. 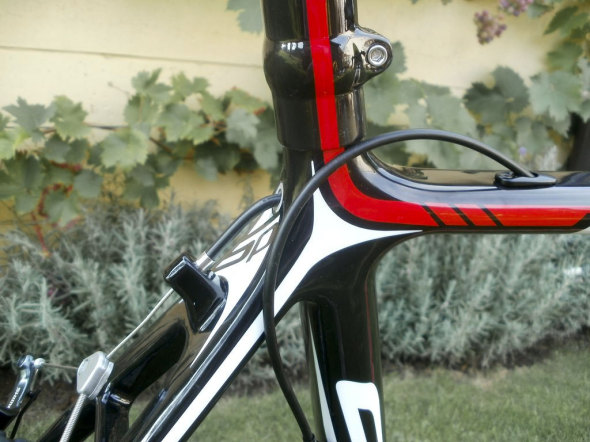 Stevens bucks the trend and moves to an integrated seat mast from a standard seatpost.

An integrated seat mast on the frame is designed to create more effective power transfer while saving grams. By slipping the mini seatpost (the Ritchey WCS Stubby) over the frame’s built-in post, the normal seatpost flex is eliminated (although some might argue that flex in the post, in the form of an Ergon or Specialized leaf spring post or a Trek Boone might be welcomed). Vardaros certainly appreciates the gram savings. “With the lighter frame and fork weight, it is much easier to lift it fifty times in forty minutes,” explains Vardaros.

Vardaros’ bike is kitted out with 3T components of handlebars, stems and wheels. Weighing in at a mere 200 grams, the 3T Ergoterra handlebar is quite unique, since they are cyclocross-specific. The bar flares out at the drops, providing 3cm more clearance at the drops compared to the hoods. “With my silly long limbs, I’ve always collected bruises from the drops of the bars during a ’cross race. I’m happy to say that I am now bruise-free since I switched to the Ergoterra bars! The flare also puts my hand in a better position when shouldering the bike or sprinting in the drops.” 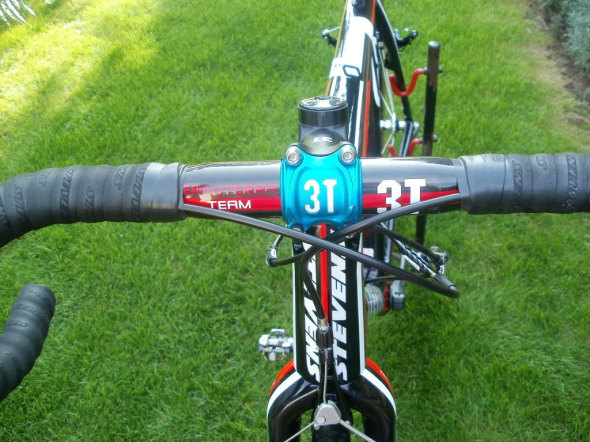 Vardaros is a bit old school, and some of her early bandit DFL cyclocross days may have still influenced her component sizing. She rides wide bars, at 44cm center-to-center, 45cm at the bar’s ends, but a relatively short crank, at 170mm (at least compared to the shorter Katie Compton’s 175mm cranks). 3T Mercurio 40 LTD full carbon tubular wheels keep the bike rolling, weighing in at 1350g a pair. With the bulk of the weight concentrated around the hub, the Mercurios “roll nicely and respond immediately to changes in pace” says Vardaros. The 43mm deep wheels are visually interesting because they put the spoke nipple at the hub, and has a unique keyhole for the spoke head in the carbon rim. Will the hole help with aerodynamics or can get clogged with mud? We’re curious. 3T’s Mercurio 40 LTD’s rim features keyholes for the spoke head, with the nipples at the hub.

Vardaros’ bike is shown with Grifo 32 tires, but she’s most excited about her sponsor Challenge Tires’ new tread called the Chicane. It has a fast rolling file-tread down the middle, combined with grippy knobbies along the outer edge of the tires.

“They are well-suited for everything from sandy courses, fast courses, and even some mud courses, where traction is only needed in the turns. Similar to the rest of the Challenge line, they almost never flat,” Vardaros explains. In addition to the Chicanes, Vardaros has an additional sets of wheels equipped with the all-around Grifos, Limus 33 mud tires and the file tread Grifo XS.

As for the Limus 33’s, Vardaros adds, “These tires are catching on [in Europe] so quickly that many riders – even top ones like Klaas Vantornout (Sunweb-Napoleon Games) and Joeri Adams (Telenet-Fidea) – are foregoing their old mud tires in favor of these.” Vardaros has also shown off a new kit with new personal sponsors this year. Following her to her new team are longtime sponsors Stevens Bikes, Challenge Tires, 3T Cycling, HempAge clothing, Specialized, Tifosi Optics and California-based Tam Bikes. In addition, she brought in a few more to make her “dream team” complete. They include T-Strong Transportation (a green transportation company based out of Texas), Belgium-based Vermarc Sport and BOOOM Sports Nutrition, CrossVegas, and SHEEX (performance sheets/sleepwear).

With the help of Belgian design company PinkOliv, Vardaros’ unique black and green kit design was created. As she is typically buried in the relentless Belgian mud, Vardaros opted for a mainly black design. But if you look carefully, though, you will notice that the black areas are actually made up of a sea of X’s to represent its intended use for  cyclocross racing!

On the flipside, the green theme reflects her “green” earth-friendly lifestyle. Not only is she a strict vegan for over a decade but she is also an environmentalist as reflected in many of her partner sponsors. In addition, she grows most of her own veggies, eats mainly organic, and has never owned a car. When she needs to get somewhere (aside from races where she and her husband Jonas take his race van) she goes by bike, public transportation, or scooter.

In addition to her sponsors, there are also a couple of extra names prominently displayed on the jersey that reflect her passions. The first is the Bike Pure blue band on the left arm to promote clean cycling. The other is The Vegan Society logo to spread the word about a plant-based diet for naturally and healthfully enhancing sports performance.  While she may be eating plants for her health, she lives a strict vegan lifestyle for the animals. When not on the bike, Vardaros is busy promoting veganism as a spokesperson for The Vegan Society, in addition to IDA (In Defense of Animals) and PCRM (Physicians Committee for Responsible Medicine).

Specs below the gallery.

Stay tuned as we bring you other bikes from the Paris to Ancaster race, and a report from the event.  To follow Vardaros’ adventures, you can connect with her on Twitter or on  her Facebook Page.