Powers and Nash Fend Off Wind For Wins at the 2015 KMC Cyclo-Cross Festival, Day One: Full Results

previews by Andrew Reimann with day’s reporting by Lauren LeClaire

With many fearing weather to be a little harsher due to the looming threat of Hurricane Joaquin earlier in the week, racing in the cold wind and muddy course on Saturday for the C1 appeared to be pleasant by comparison.

The Luna Chix were back in UCI racing action from their fun break at the CLIF Bar CykleScramble last weekend, but many of the Brits and Australians, including Helen Wyman and Lisa Jacobs, left to their respective homes, so the field dynamics were certain to be completely changed from the Gran Prix of Gloucester. Luna’s Katerina Nash in particular was anxious to do more pedaling, after getting shut out of the finals in the fun-oriented bike relay race the weekend prior. 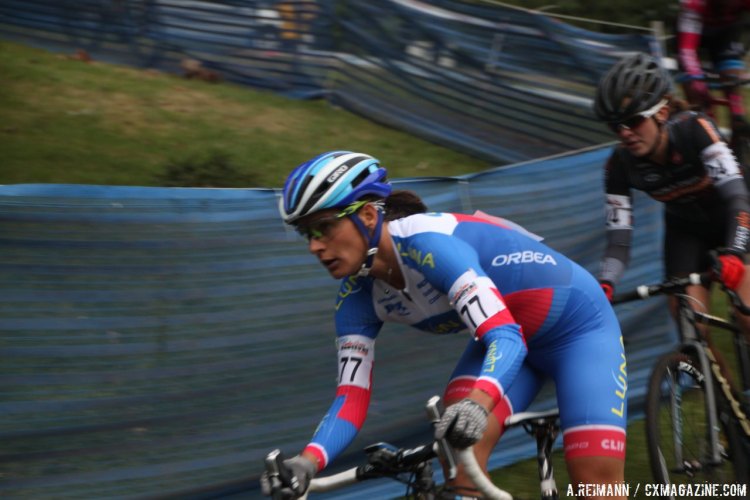 Nash took control of the race and fended off Compton at the 2015 KMC Cyclo-Cross Festival, Day One. © Andrew Reimann / Cyclocross Magazine

One special addition was also Emma White, who is coming off a second in the Time Trial and Road Race from the World Championship in Richmond. Still, plenty of questions carried over from the week before: Could Ellen Noble repeat her success, would Nash resume her duties from winning at the 2015 World Cup at CrossVegas, and would Compton find herself off the front or chasing throughout the race? Compton was leading in the early stages of the race, but found herself chasing after Nash late. © Andrew Reimann / Cyclocross Magazine

Nash, who is used to racing a wide variety of terrains both in Europe and the states, stated “I really liked the course layout, it was very different than the last time I raced here two years ago. It was nice to use a larger portion of the course with more variety, that was really great.” When asked about how she feels about tomorrow after her efforts today, she continued “I am excited for tomorrow, I like to do back-to-back events, it is a lot better for me than just one day only. The course will be different again tomorrow and I am excited for that, and looking forward to doing it all again tomorrow.”

Last weekend, the full arsenal of the Cannondale p/b Cyclocrossworld.com unleashed their fury in an attempt to stifle the Pro CX Calendar winning streak of Jeremy Powers, but untimely flats at the sharp gravel sections of Gloucester kept Stephen Hyde and Ryan Trebon off Powers’ wheel. Powers and Hyde attacked each other several times in the race, with Powers taking the lead in the last few laps. © Andrew Reimann / Cyclocross Magazine

The UCI Elite Men started off with another promising youth of cyclo-cross, Curtis White (Cannondale p/b Cyclocrossworld) leading the way from the whistle, with National Champion Jeremy Powers (Aspire Racing) on his wheel. A large group of riders stuck together early on, all fighting the winds on course, with Daniel Summerhill (Maxxis-Shimano Pro Cyclocross) leading the way. A few laps later, a group of 2 consisting of Powers and Stephen Hyde (Cannondale p/b Cyclocrossworld) would gain time together, putting pressure on the group behind. Powers lead an aggressive charge, with Hyde responding, until Powers began to open up a gap and really drive the pace. Hyde remained within 16 seconds of Powers, and came in close behind after Powers took the win. The battle for third was tight as well, coming down to a sprint between White and Summerhill, where ultimately, despite an earlier incident with a crash and breaking his shoe and having to do a shoe swap in the pit, White took the final podium spot. On the last lap, Hyde was less than 10 seconds behind Powers, but firmly in control of second place. © Andrew Reimann / Cyclocross Magazine

White, who is having a phenomenal week, stated it was a week of firsts for him, with a first ever shoe change in the pits but also a first C1 podium. “The course layout made the race very hard today,” said White. “And then there was the wind. But it was probably the most difficult course I have ever seen here in Providence. It was unfortunate about the crash and the shoe, but it was a great course that led to a harder style of racing. We’ll see what tomorrow brings.”