Photo Gallery: 2017 Crusher in the Tushar Brings Heat, Rain and a Thrilling Finish

The Crusher in the Tushar is known for its tough climbs, with 10,000 of total elevation gain, beautiful vistas and at times, rough weather. The 2017 version of the Crusher did not disappoint, with temperatures up near 100 degrees giving way to rain and hail while most of the field was still on the course. Todd Wells and Keegan Swenson led the descent down the Col d'Crush during the first third of the race. 2017 Crusher in the Tushar © C. See

On the Women's side, retired professional Janel Holcomb (Mavic) used her Haute Route Mavic Rockies training in the mountains of Colorado to propel her to the victory at her first-ever Crusher in the Tushar. Holcomb fought off challenges on the hills from 2016 winner Mindy McCutcheon (DNA Cotton Sox), Breanne Nalder (Plan7 DS) and Larissa Connors (Team Twenty20/Felt) to win in 5:00:42. The rain came in hour five, making the road tougher for Women's winner Janel Holcomb and much of the field. 2017 Crusher in the Tushar © C. Fegan-Kim

For the Men, Rob Squire (Felt-Assos) overcame a flat tire early on to chase down Todd Wells (Todd Wells) and Keegan Swenson (Cannondale 3Rox Racing) and ultimately pass them on the famed Cul d'Crush climb. Squire caught Wells just before the Cul d'Crush KOM, and the two battled it out right down to the finish. They went into the last steep climb together before Squire was able to find the extra gear to get over the top and win his third-straight Crusher. Photographers Catherine Fegan-Kim and Christopher Lee were on hand to capture all the action. Below is a gallery of some of the photos Fegan-Kim and Lee got at the hot, hail-y, gravely Crusher in the Tushar.

Stay tuned for more coverage of the 2017 Crusher in the Tushar, including interviews with Janel Holcomb and Rob Squire.

Photo Gallery: 2017 Crusher in the Tushar 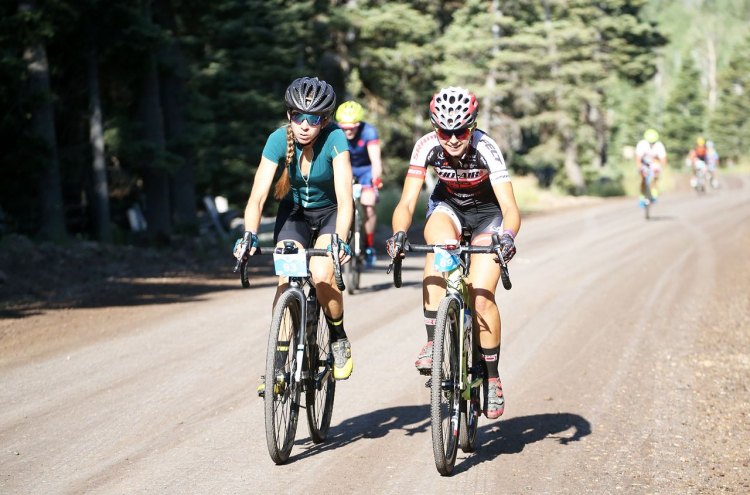 Janel Holcomb and Larissa Connors battled at the front for part of the 2017 Crusher in the Tushar © C. Fegan-Kim

Previous post Training Tuesday: Develop a Race Day Routine But Be Ready for the Unknown Unknowns